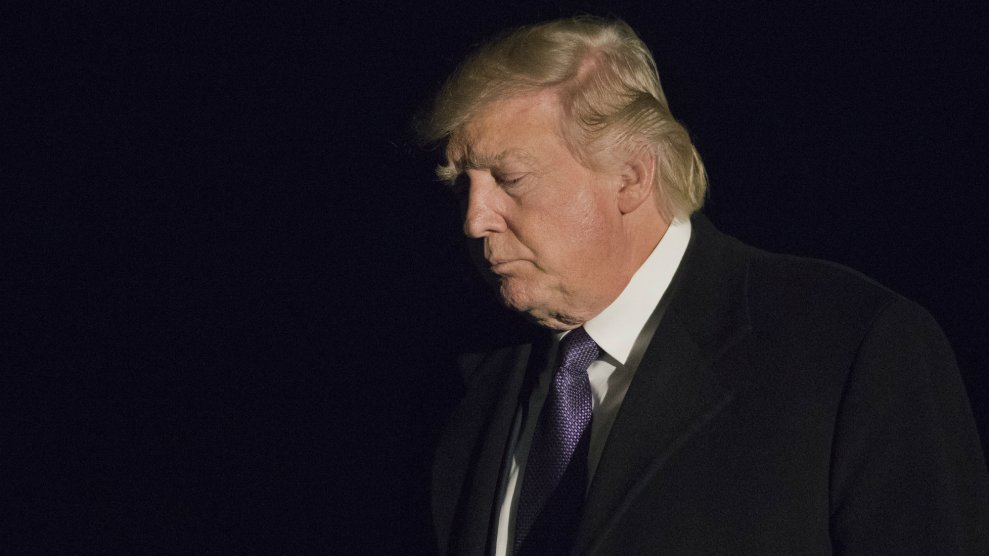 The first question at White House press secretary Sean Spicer’s daily briefing on Tuesday—half a day after the news broke that national security adviser Michael Flynn had resigned—focused on a key issue: Flynn’s contacts with the Vladimir Putin regime during the campaign. Flynn has been under fire for his post-election conversations with Russian ambassador Sergei Kislyak, during which he discussed the sanctions President Barack Obama was imposing on Russia as punishment for Moscow’s meddling in the US election. But ABC News’ Jonathan Karl asked whether any Trump associates were in touch with the Russian government before the election.

This is important, for that would mean that Trump folks were in contact with the Putin regime while it was attacking American democracy. Trump and his team have adamantly denied there were any interactions with Russian officials. At a press conference in mid-January, Trump ignored a question about such contacts. Once the event was over, he said, “No contact.” Days later, on Face the Nation, incoming Vice President Mike Pence said the Trump campaign had no interactions with Moscow. Host John Dickerson asked him, “Did any adviser or anybody in the Trump campaign have any contact with the Russians who were trying to meddle in the election?” Pence declared, “Of course not. And I think to suggest that is to give credence to some of these bizarre rumors that have swirled around the candidacy.”

Yet the Washington Post reported days ago that Kislyak told the newspaper he had been in touch with Flynn since before the election. The ambassador declined to say what he and Flynn had discussed. And the newspaper reported that the Flynn-Kislyak conversations “were part of a series of contacts between Flynn and Kislyak that began before the Nov. 8 election and continued during the transition, officials said.” These facts and Kislyak’s comment undercut Trump’s and Pence’s assertions there were no pre-election contacts.

So what was Spicer to say when Karl posed this query? At first, Spicer said that Flynn did speak to the Russian ambassador during the transition. No, Karl protested, that’s not the question. What about before the election? Spicer then sputtered out this reply: “There’s nothing that would conclude me that anything different has changed with respect to that time period.”

That contorted reply would seem to mean that the White House is sticking to its previous denial. But this assertion runs contrary to what is now the public record: that the Trump campaign was in contact with Putin’s man in Washington while Putin was subverting an American election to help Trump. What was going on? What was said? What messages did Flynn send to the Putin regime? These are the obvious questions that warrant answers. They are also dangerous questions for Trump. And that’s why Spicer cannot acknowledge the hard truth that the Flynn scandal started before the election. These contacts deserve as much, if not more, attention than the conversations that triggered this controversy, for they are relevant to the fundamental subject at hand: Trump’s relationship with the autocratic leader who mounted an operation to subvert American democracy to assist Trump.

Update, 2/15/17: It turns out it’s not just Flynn. Citing multiple current and former US officials, the New York Times reported Tuesday evening that multiple Trump campaign officials and other Trump associates “had repeated contacts with senior Russian intelligence officials in the year before the election.” According to the Times report, one of those involved was Paul Manafort, who chaired Trump’s campaign from April to August of 2016. Manafort has denied the allegation, telling the Times that it is “absurd.”