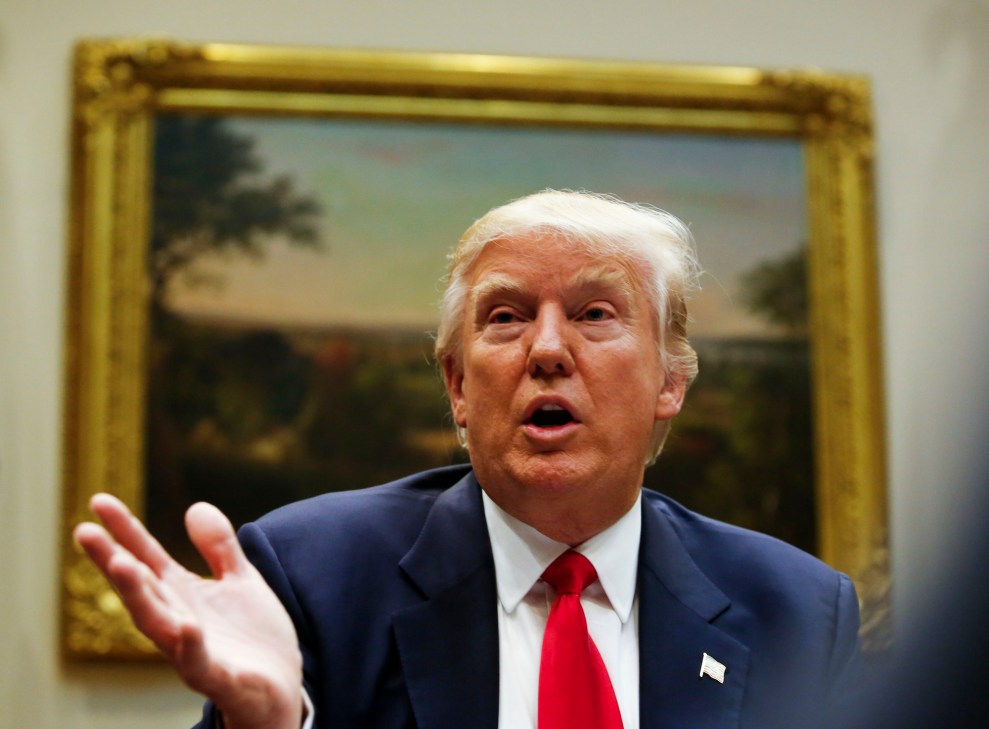 President Donald Trump reportedly issued a bizarre statement Tuesday in response to the recent wave of anti-Semitic attacks around the country, in which dozens of Jewish community centers and cemeteries have been targeted by bomb threats and vandalism.

According to Pennsylvania Attorney General Josh Shapiro (D), who was quoted by Buzzfeed, Trump said, “Sometimes it’s the reverse, to make people—or to make others—look bad.” Shapiro added that the president “used the word ‘reverse’ I would say two to three times in his comments.”

“I really don’t know what that means, or why he said that,” Shapiro said. (Shapiro did note that Trump called the crimes “reprehensible.”)

The White House did not respond to a request for comment from Mother Jones.

The alleged remarks are the latest in a series of strange statements that Trump has made in response to questions about an apparent wave of anti-Semitic and racist incidents.

Trump angrily dismissed a Jewish reporter’s questions on the issue during a chaotic press conference two weeks ago and claimed he was the “least racist person” ever.

During the same press conference, another reporter followed up, asking Trump about “a rise in anti-Semitism around the country, some of it by supporters in your name.” In response, Trump suggested that some of the incidents were staged by his “opponents.”

“Some of it—can I be honest with you? And this has to do with racism and horrible things that are put up,” he said. “Some of it written by our opponents…You don’t think anybody would do a thing like that? Some of the signs you’ll see are not put up by the people that love or like Donald Trump. They’re put up by the other side. And you think it’s, like, playing it straight? No. But you have some of those signs and some of that anger is caused by the other side.”

Under pressure to finally respond after vandalism at a Jewish cemetery in St. Louis, Trump eventually condemned such incidents as “horrible.” Jewish groups, including the Anne Frank Center for Mutual Respect, slammed the president for his delayed response and described it as insufficient.