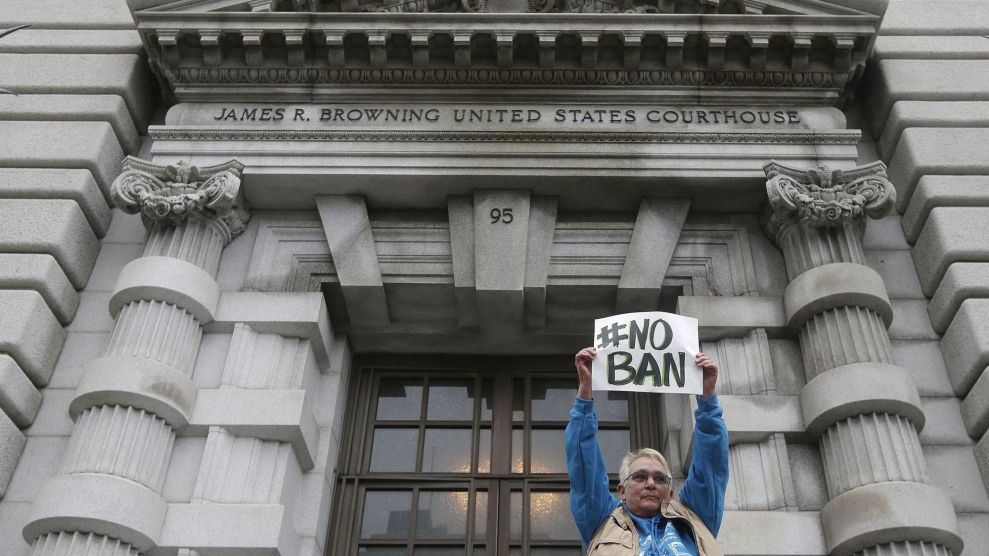 A woman holds up a sign outside the 9th US Circuit Court of Appeals in San Francisco. Jeff Chiu/AP

A panel of three federal appeals court judges on Thursday dealt another blow to President Donald Trump’s executive order temporarily banning people from seven predominantly Muslim countries and all refugees from entering the United States. The 9th Circuit Court of Appeals panel ruled against the Trump administration and upheld a Seattle court ruling that blocked implementation of the ban. That means that travelers from the seven countries, as well as refugees, can continue to enter the United States as the case proceeds through court.

In a unanimous decision, the judges rejected the Trump administration’s argument that courts could not challenge the president’s executive order: “The Government has taken the position that the President’s decisions about immigration policy, particularly when motivated by national security concerns, are unreviewable, even if those actions potentially contravene constitutional rights and protections.” The judges argued there was no precedent to support this argument, saying that it “runs contrary to the fundamental structure of our constitutional democracy.” It also noted “the serious nature of the allegations the States have raised with respect to their religious discrimination claims.”

SEE YOU IN COURT, THE SECURITY OF OUR NATION IS AT STAKE!

Last Friday, a federal judge in Seattle temporarily blocked the ban in response to lawsuits by the state governments of Washington and Minnesota alleging the ban was discriminatory and harmful to its residents. The Trump administration filed an emergency motion opposing the decision, and judges heard oral arguments on Tuesday over whether to uphold the judge’s ruling. During the hearing, judges expressed skepticism of the Justice Department’s claim the executive order was justified and that courts should not be challenging the president’s assessment of national security risks.

Noah Purcell, the solicitor general for Washington state, argued the order caused chaos, urging the court to serve as a check on executive power. “It has always been the judicial branch’s role to say what the law is and to serve as a check on abuses by the executive branch,” said Purcell. “That judicial rule has never been more important in recent memory than it is today.”

Yet judges also grilled the solicitor general, pressing him to identify precisely how the travel ban discriminated against Muslims if the order didn’t affect the majority of the Muslim population, as well as to specify the number of people harmed. Purcell argued the state did not need to prove the ban harmed every Muslim, but that there was a clear intention to do so, citing Trump’s campaign promise to ban Muslim visitors. He also alluded to Trump adviser Rudy Giuliani’s comments about how Trump had asked for advice on how to legally implement a Muslim ban.

Trump lashed out against the courts on Wednesday, calling the hearing “disgraceful.” “I don’t ever want to call a court biased, so I won’t call it biased,” Trump told a gathering of law enforcement officials in Washington, DC. “But courts seem to be so political, and it would be so great for our justice system if they would be able to read a statement and do what’s right.”

The executive order, signed on January 27, led to widespread protests throughout the country and confusion among Customs and Border Protection officers over how to implement the directive. Hundreds of people were detained at airports or barred from entering the United States, and at least tens of thousands of visas were revoked. At least four states have sued the Trump administration over the order, in addition to dozens of lawsuits brought by civil rights groups such as the American Civil Liberties Union and the Council on American-Islamic Relations.

The decision will likely be appealed and head to the Supreme Court.