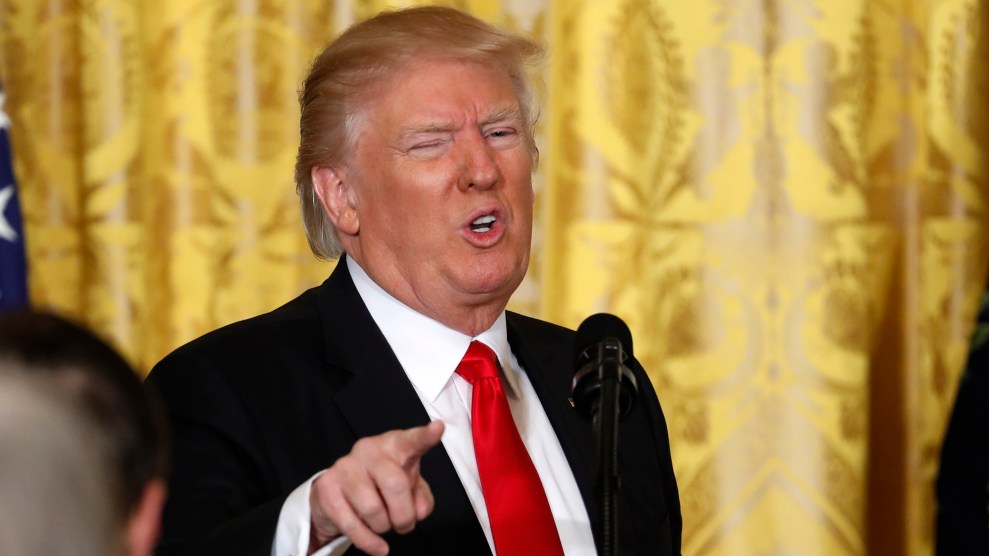 In a wide-ranging and at-times erratic press conference that lasted more than an hour Thursday afternoon, President Donald Trump said he had “nothing to do” with any possible contacts between his campaign associates and Russia during last year’s election. But he repeatedly declined to assure reporters that no such contacts took place.

At another point during the press conference, he said “nobody that I know of” from his campaign had contacts with Russia during the election.

The press conference took place two days after the New York Times reported that according to current and former US officials, intercepted phone calls showed that “members of [Trump’s] 2016 presidential campaign and other Trump associates had repeated contacts with senior Russian intelligence officials in the year before the election.” On Thursday, Trump referred to that story as “a joke.” He decried “fake news put out by the media,” which he claimed was spread by “people, probably from the Obama administration, because they’re there, because we have our new people going in place, right now.”

On Monday night, Lt. General Mike Flynn resigned as Trump’s national security adviser following a Washington Post story revealing that Flynn had discussed US sanctions against Russia with the Russian ambassador after the election but before Trump took office—despite denials to Vice President Mike Pence, among others.

Trump said Thursday that Flynn’s talks with the Russian ambassador weren’t the problem; rather he fired Flynn for lying to Pence: “He didn’t tell the vice president of the United States the facts, and then he didn’t remember, and that just wasn’t acceptable to me,” Trump said.

Trump denied ordering Flynn to discuss sanctions with the Russian ambassador, adding that Flynn was “doing his job.”

Trump characterized the various stories about Russia as “ruse” used to distract from Hillary Clinton’s election loss. “You can talk all you want about Russia, which was all a fake news fabricated deal to try and make up for the loss of the Democrats, and the press plays right into it,” he said.