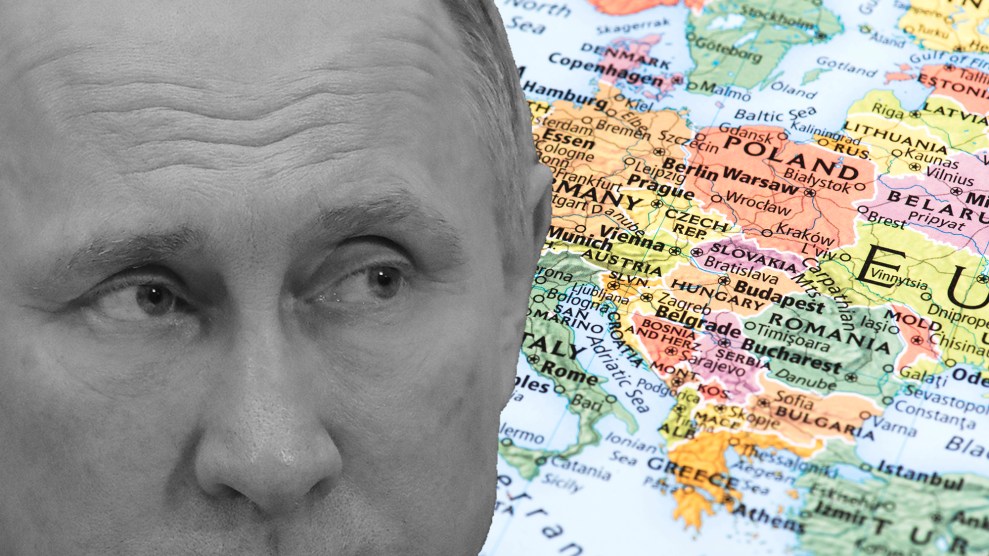 When the US intelligence community released a report in early January laying out the evidence for Russian meddling in the US election, US officials warned that this wasn’t a one-off attack, and that Russia could soon set its hacker corps loose to disrupt elections in other countries. “Moscow will apply lessons learned from its Putin-ordered campaign aimed at the US presidential election to future efforts worldwide,” the report said, “including against US allies and their election processes.”

Putin didn’t wait long to fulfill that prediction. On February 22, the Moscow Times reported that the Russian government had “created a new military unit to conduct ‘information operations’ against Russia’s foes.” Russian Defense Minister Sergei Shoigu said, when announcing the unit, that “propaganda should be smart, competent and effective.” There’s no concrete evidence yet, but it appears that Russia may be now attempting to weaken NATO and to divide Europe by destabilizing elections in France and Germany, two of the EU’s strongest members.

“This form of interference in French democratic life is unacceptable and I denounce it,” Jean-Marc Ayrault, France’s minister of foreign affairs, said on February 19 in an interview with Le Journal du Dimanche, a French newspaper. “The French will not accept that their choices are dictated to them,” he said while discussing Russian actions in Europe and attempts to weaken non pro-Russian candidates ahead of the country’s presidential election in May.

Ayrault was responding to reports that the Russian government may have been targeting the campaign of Emmanuel Macron, a centrist “pro-liberal and pro-Europe” candidate who has a chance of defeating Marine Le Pen, a right-wing nationalist, in the hotly contested French presidential elections this May. Le Pen has promised to pull France out of the European Union, and, much like Donald Trump, has advocated a better relationship with the Russian government. Macron’s campaign has said its computer systems have been attacked, and that “fake news”—that include allegations of a homosexual affair and attempts to connect Macron with American financial interests and Hillary Clinton—has been spread throughout France by Russian-owned media, such as Sputnik and RT.

Daniel Treisman, a professor of political science at UCLA and an expert on Russian politics, says “it certainly seems plausible” that the Russian government would attempt to interfere in the European elections, as it’s alleged to have done in the US.

“[Putin] is quite skeptical about the possibility of building strong friendships or cooperation in the future with the elites of western Europe,” Treisman tells Mother Jones. “He feels that they’ve taken a very anti-Russian line, so he’s reaching out to other forces who are also opposed to the European elites.” Among those so-called Western European elites, are German Chancellor Angela Merkel, Netherlands Prime Minister Mark Rutte, and Macron in France. Part of Putin’s plan could be to keep the west distracted “with its own problems” so it is “less able to cohesively oppose what he’s done in Ukraine,” Treisman says.

The French government’s top figures reportedly had internal discussions about cyber threats to its presidential election, and earlier this year the official in charge of security for the nation’s ruling party told Politico that the country’s leading politicians and political campaigns “have received no awareness training at all about espionage and hacking,” and that “we are not at all up to the level of the potential threat.” The Russian government has denied that it is working to meddle in the French elections, just as it denied meddling in the 2016 US presidential election.

“We didn’t have, and do not have, any intention of interfering in the internal affairs of other countries,” Kremlin spokesman Dmirtry Peskov told reporters on February 14. “That there is a hysterical anti-[President Vladimir] Putin campaign in certain countries abroad is an obvious fact.”

Worries aren’t limited to the French elections, which will be held in April and May. The head of the German foreign intelligence service said in November that its next election cycle could be buffeted with the same sort of misinformation and cyber-attacks that plagued the US elections. “We have evidence that cyber-attacks are taking place that have no purpose other than to elicit political uncertainty,” said Bruno Kahl, the president of the Bundesnachrichtendienst (the German foreign intelligence service), according to the Guardian. Angela Merkel said at the time that “such cyber-attacks, or hybrid conflicts as they are known in Russian doctrine, are now part of daily life and we must learn to cope with them.” Merkel’s hard line against Putin in the wake of the Russian annexation of Crimea in 2014 and strong support of the European Union are among the reasons that she could be targeted by Russia before her reelection vote in September.

And in the Netherlands, Dutch Foreign Minister Bert Koenders told Politico on January 12 that he didn’t have “concrete evidence” interference had taken place, but he wasn’t “naive” to the fact that it could happen at some point ahead of that country’s March 15 election, wherein Rutte is being challenged by Geert Wilders. Earlier this month, the New York Times reported that the Russian government, among other countries, had “tried hundreds of times in recent months to penetrate the computers of Dutch government agencies and businesses.”

Far-right MP Wilders—a vehement opponent of Islam and a strong contender to be the Netherlands next prime minister—has also called for leaving the EU, but he may not be as pro-Putin as Le Pen and Trump. Nevertheless, Dutch officials have said they will count all election ballots by hand due to worries about manipulation of electronic vote counting machines.

Treisman says what happens next in terms of Russia and the European elections is “all up in the air, in part because we don’t know what the US administration is going to end up doing” with regard to its policy toward Russia.

Trump has repeatedly said that he’s hoping for a good working relationship with Putin, but offered mixed and confusing signals during the campaign about what he thought about Putin’s actions in the Ukraine and his annexing of Crimea in 2014. During her first full day on the job, UN Ambassador Nikki Haley condemned Russian violence in eastern Ukraine and called for “an immediate end to the Russian occupation of Crimea.” Trump has rattled European allies by praising Brexit and calling NATO “obsolete,” but members of his cabinet have reaffirmed the US commitment to a strong NATO, which is one of Putin’s main points of contention with the west.

While it makes sense to watch all of this and try to discern a pattern in Putin’s strategy, Treisman says, “I don’t think he has this clear over-arching agenda, that he’s out to expand Russia’s borders or achieve anything very concrete. I think he’s just looking for ways to resist pressures he sees coming from the west and increase his influence, and his options, and his friends worldwide.”