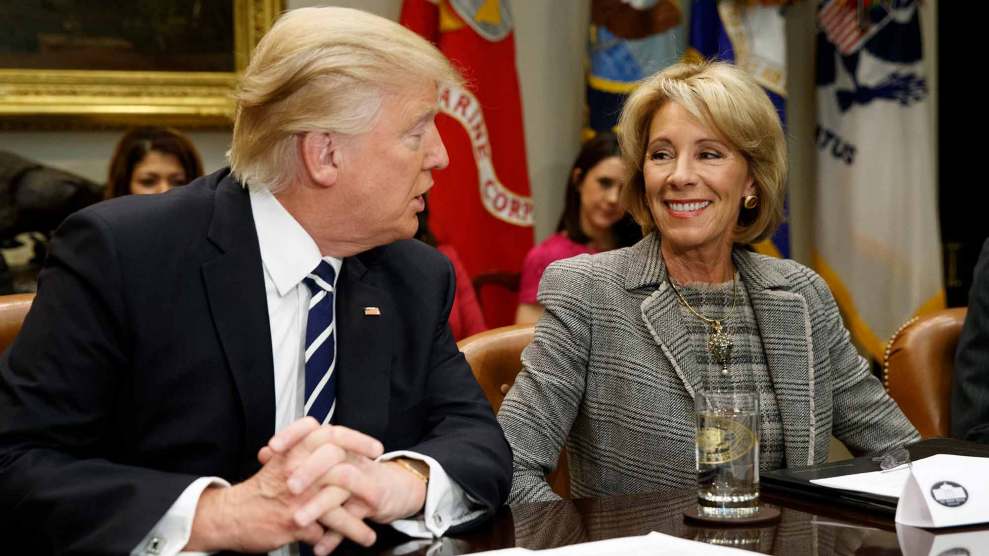 During his address before a joint session of Congress earlier this week, President Donald Trump paused to introduce Denisha Merriweather, a graduate student from Florida sitting with first lady Melania Trump. Merriweather “failed third grade twice” in Florida’s public schools, Trump said. “But then she was able to enroll in a private center for learning, great learning center, with the help of a tax credit,” he continued, referring to Florida’s tax credit scholarship program that allows students attend private schools. Because of this opportunity, Denisha became the first member of her family to graduate from high school and college.

Trump used Denisha’s story to call for his favorite education policy, school choice, asking lawmakers to “pass an education bill that funds school choice for disadvantaged youth, including millions of African American and Latino children. These families should be free to choose the public, private, charter, magnet, religious, or home school that is right for them.”

Education Secretary Betsy DeVos has also been pointing to Denisha and Florida in the past two weeks as a way to promote school choice. “Florida is a good and growing example of what can happen when you have a robust array of choices,” DeVos told a conservative radio host on February 15. DeVos brought up the state’s school choice model again during her speech to the leaders of historically black colleges earlier this week.

So what is it about Florida? For starters, the state offers many different types of school choice, including charter schools, vouchers for low-income students and those with disabilities, and tax credit scholarships. Charter schools, found in 43 states and Washington, DC, represent the most common type of school choice. Vouchers are a little more complicated: They essentially operate like a state-issued coupon that parents can use to send their child to private or religious schools. The amount is typically what the state would use to send a kid to a public school. But vouchers are difficult to implement, because many state constitutions, like those in Michigan and Florida, have what are called Blaine Amendments, which prohibit spending public dollars on religious schools. And notably, only 31 percent of Americans support vouchers.

“Democrats don’t like vouchers. Republicans don’t like federal programs, and would rather leave major school reform decisions up to states and local communities.”

Tax credit scholarships provide a crafty mechanism to get around these obstacles. Tax credits are given to individuals and corporations that donate money to scholarship-granting institutions; if parents end up using those scholarships to send their kids to religious schools—and 79 percent of students in private schools are taught by institutions affiliated with churches—the government technically is not transferring taxpayer money directly to religious organizations.

While DeVos is best known as an advocate of vouchers, most veteran Beltway insiders told me that a federal voucher program is very unlikely. “Democrats don’t like vouchers. Republicans don’t like federal programs, and would rather leave major school reform decisions up to states and local communities,” Rick Hess, a veteran education policy expert with the conservative American Enterprise Institute said. “Realistically, nobody thinks they’ve got the votes to do a federal school choice law, especially in the Senate.”

This political reality is perhaps why Trump and DeVos are singling out Florida’s tax credit programs as a way to expand private schooling options. While Trump and DeVos have not specified what shape this policy might take at the federal level, most of these changes will come from the state legislators. Republicans have full control of the executive and legislative branches in 25 states, and control the governor’s house or the state legislature in 44 states. At least 14 states have already proposed bills in this legislative session that would expand some form of vouchers or tax credit scholarships, according to a Center for American Progress analysis. (And 17 states already provide some form of tax credit scholarships, according to EdChoice.)

This perfect storm for pushing through various voucher schemes comes at a time when the results on the outcomes of these programs “are the worst in the history of the field,” according to New America researcher Kevin Carey, who analyzed the results in a recent New York Times article. Until about two years ago, most studies on vouchers produced mixed results, with some showing slight increases in test scores or graduation rates for students using them. But the most recent research has not been good, according to Carey: A 2016 study, funded by the pro-voucher Walton Family Foundation and conducted by the conservative Thomas B. Fordham Institute, found that students who used vouchers in a large Ohio program “have fared worse academically compared to their closely matched peers attending public schools.”

A 2011 investigation of Florida private schools described the system as a “cottage industry of fraud and chaos.”

Then there is the issue of state oversight and transparency. Many states, including Florida, have little to no jurisdiction over private schools and don’t make student achievement data public, save for attendance. A 2011 award-winning investigation by Gus Garcia-Roberts of the Miami New Times described the resulting system as a “cottage industry of fraud and chaos.” Schools could qualify to educate voucher and tax credit scholarship students even though they had no accreditation or curriculum. Some staffers in these schools were convicted criminals for drug dealing, kidnapping, and burglary. “In one school’s ‘business management’ class, students shook cans for coins on the streets,” Garcia-Roberts found.

Florida’s Department of Education investigated 38 schools suspected of fraud and in 25 cases, the allegations were substantiated. “It’s like a perverse science experiment, using disabled school kids as lab rats and funded by nine figures in taxpayer cash,” Garcia-Roberts wrote. “Dole out millions to anybody calling himself as educator. Don’t regulate curriculum or even visit campuses to see where the money is going.”

But these on-the-ground realities in Florida won’t tame the enthusiasm of a voucher booster like DeVos. As I showed in my recent investigation, her philanthropic giving shows an overwhelming preference for promoting private, Christian schools, and conservative, free-market think tanks that work to shrink the public sector in every sphere, including education. These past choices suggest that the data—or the fact that there are many stories like Denisha Merriweather’s in America’s public schools—doesn’t matter.