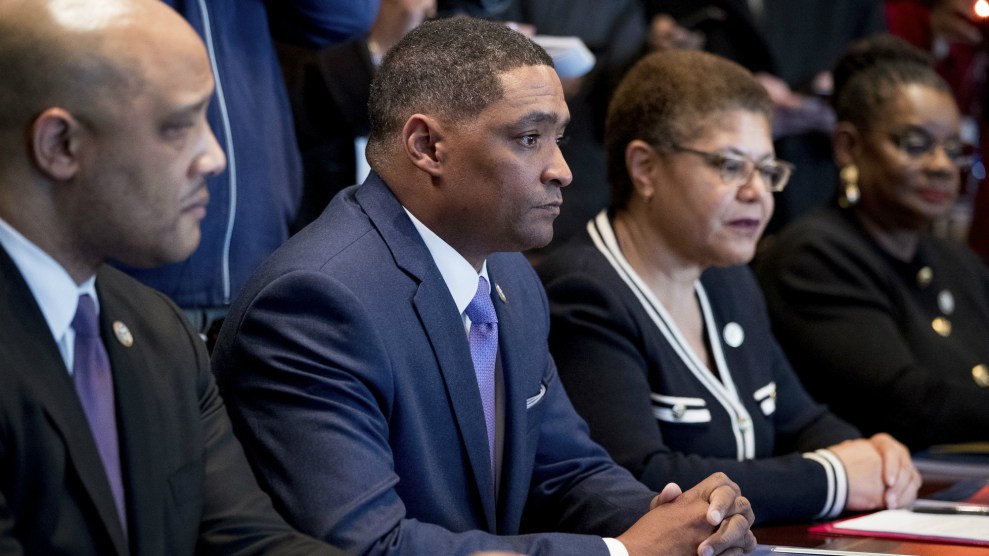 In the lead-up to their meeting today with President Donald Trump, Congressional Black Caucus leaders said they would focus on explaining what African Americans stand to lose under a Trump presidency. Now, the caucus has shared its vision for black America in a new document released this afternoon.

Shortly after the meeting with the president ended, the CBC released “We Have a Lot to Lose: Solutions to Advance Black Families in the 21st Century,” a 130-page policy document drafted by the caucus in response to a question frequently posed by the president (“What do you have to lose?”) when he addressed black voters on the campaign trail. During the campaign, Trump was frequently criticized for characterizing black America as being uniformly decimated by crime and violence.

“We honor this opportunity to enlighten President Trump on the history and diversity of African Americans and offer bold policy solutions to advance our communities, and all Americans, in the 21st century,” the document says, adding, “If President Trump is sincere in his interest in advancing the Black community, this document should be the guiding post of his Administration.” A copy of the document was delivered to the president during the meeting.

“There were many areas where we disagreed with the policy solutions, but it was a meeting where both sides listened and where we were candid about disagreements,” Rep. Cedric Richmond (D-La.) the caucus chair, said at a press conference after the meeting. Richmond said members shared their concerns about how Trump has discussed black communities in the past, but that there was agreement on some issues, like the need for improved infrastructure.

“He listened,” Richmond said of Trump.

According to an excerpt sent to Mother Jones ahead of the meeting, the policy document highlights several areas that the CBC wants the president to focus on—including voting rights, the economy, health care, environmental justice, and rural America—and offers detailed solutions. In a section on criminal justice, for example, the document notes that in contrast to Trump’s emphasis on adopting “tough-on-crime” policies, the caucus would rather see an end to racial profiling, continued federal oversight of police departments, and reforms to the corrections system. “Taxpayer money would be better spent on the front end of the criminal justice system to prevent crimes from occurring in the first place,” the document states.

To solve these problems, the caucus suggests things like de-prioritizing arresting non-violent drug offenders and establishing a permanent White House commission aimed at addressing the needs of black men and boys. The CBC also suggests permanently authorizing and funding the Second Chance Act, a law that provides federal grants for state and local programs aimed at improving reentry into society from prison.

The CBC also delivered letters from several caucus members addressed to the president and members of his Cabinet. In a letter to Attorney General Jeff Sessions, Richmond and Rep. John Conyers (D-Mich.) write that “the first several weeks under your tenure have given us many causes for concern.” The congressmen note that they are particularly worried about the fate of criminal justice reform, racial profiling, voting rights, and policing under a Sessions’ Justice Department. In January, Richmond and other members of the CBC testified against Sessions’ nomination for attorney general, citing his history on racial controversies.

In a letter to Education Secretary Betsy DeVos, Richmond and Rep. Bobby Scott (D-Va.) cite their concerns with the administration’s focus on school choice vouchers, arguing that diverting funds to private schools will further endanger public schools and leave “the most disadvantaged students with the fewest resources.” The letter also notes that despite a highly publicized meeting between the Trump administration and the leaders of historically black colleges and universities, the president’s proposed budget offers little insight into how it will address educational institutions specifically aimed at helping minorities.

During the meeting, Trump said he would work to help the black community. “Throughout my campaign, I pledged to focus on improving conditions for African American citizens,” he said at the beginning of the meeting. “This means more to me than anybody would understand or know.”

The CBC says it will continue to push its agenda and stand against the president when necessary. “We’re going to keep advocating,” Richmond said as the press conference came to a close. “We’re not called the ‘conscience of the Congress’ for nothing.”