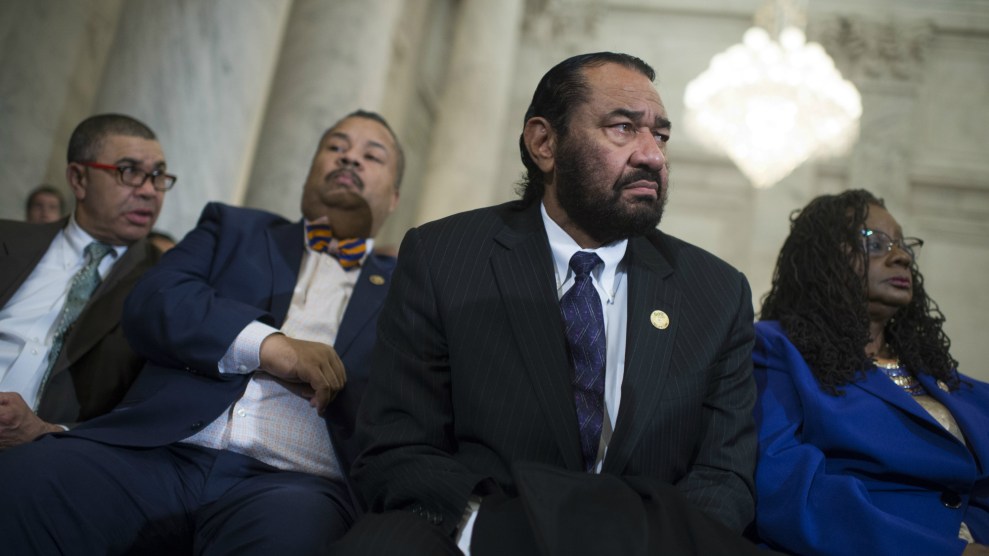 During last year’s presidential campaign, Donald Trump’s outreach to African American voters was summed up by a single question he repeatedly asked them: “What do you have to lose?” In Trump’s opinion, the question suggested, there was little that could make life in black America worse.

Now, seven months after Trump first posed that question, the Congressional Black Caucus says it is prepared to share its answer.

On Wednesday afternoon, Trump will meet with members of the caucus to discuss his policy proposals for black America. The meeting will put the president face to face with some of his strongest critics in Congress. For the CBC, the meeting offers a chance not only to discuss issues facing African Americans but also to further cement its position as a key political—and oppositional—force during the Trump presidency.

The meeting comes two months after the CBC, which includes nearly all black members of Congress, first requested a meeting with the president. On January 19, the caucus sent a letter to Trump outlining its concerns with the president’s policy proposals and requested a meeting to discuss them. But that request was not answered until February. The reply came after American Urban Radio Networks reporter April Ryan asked Trump during a press conference if he would meet with black lawmakers, only for Trump to ask if Ryan, who is black, would set it up. As the backlash to his comments crescendoed, the caucus stepped in to remind the president of its previous meeting request; a meeting was reportedly in the works just hours later.

Wednesday’s meeting will be considerably smaller than initially announced. Last week, White House Press Secretary Sean Spicer said that the entire 49-person caucus was invited. But a spokeswoman for the caucus says that just six members, all officers on the CBC’s leadership team, will meet with the president.

Rep. Cedric Richmond (D-La.), the chair of the caucus, says that the small group size is a strategic move that differentiates this discussion from some of the larger listening sessions that have occurred at the White House in recent weeks. “This will be a serious meeting, not a photo opportunity,” Richmond said in a statement on Tuesday.

Trump’s “New Deal for Black America” proposal is likely to be a focal point of Wednesday’s meeting.

Asked for additional details, the White House declined to comment, saying that more information would be provided shortly before the meeting.

Rep. Karen Bass (D-Calif.), a CBC vice chair who will attend the meeting, says she wants to focus on explaining the issues facing African Americans. “The CBC sees this as an opportunity to both express concerns about things the President has said in his remarks about the Black community, but also a time to see if there are areas of agreement where there are real solutions that can be put forward,” she said in an emailed statement.

In a separate statement, the CBC said it would “talk about the issues affecting the African-American community, including proposed budget cuts, the ACA repeal and replace bill, education, including HBCUs, criminal justice reform, infrastructure, and economic opportunity for urban and rural communities,” during the Wednesday meeting.

Members of the caucus leadership team told Mother Jones they hope to cover a range of issues during the meeting. Bass mentioned that she would like to discuss mass incarceration and reentry support for the recently incarcerated, while Rep. Anthony Brown (D-Md.), the caucus parliamentarian, said he wants to focus on Pell Grants and transportation. Rep. André Carson (D-Ind.), a CBC vice chair and one of two Muslims in Congress, says he plans to discuss the revised travel ban issued by the Trump administration earlier this month.

Several members of the caucus did not respond to requests for comment or said that they wanted to avoid giving away too much detail before the meeting. But the caucus’ recent statements provide some insight into further possible topics of discussion. Trump’s “New Deal for Black America” proposal is likely to be a focal point. Released last October, the 10-point plan calls for a number of reforms intended to support “urban renewal” and help African Americans, including increased federal support for school voucher programs, a focus on reducing crime, enhanced infrastructure, and “protect[ing] the African-American Church.” The CBC has criticized Trump’s plan, saying in its January letter that the proposal “represents the same old ‘Trickle Down’ economics assumptions that didn’t work for our communities in the 1980’s or in the 2000’s.”

The meeting with the Trump administration comes at a moment of increased importance for the CBC.

Last month, in an effort to demonstrate his commitment to this proposal, Trump met with about 100 presidents of historically black colleges and universities to discuss how the White House could support these institutions. The president also released an executive order that moved the federal office overseeing HBCUs out of the Department of Education and into the White House, a change that had been requested by some education advocates dissatisfied with how the Obama administration had handled HBCU issues. But HBCU leaders had come to Washington hoping to secure increased federal funding for their institutions, a request that was not reflected in the budget recently released by the White House.

Black lawmakers say the president’s budget fails to help black America and promise to bring up these concerns during the meeting. Among other things, the administration’s proposed budget calls for cutting Community Development Block Grants, which provide funding to state and local governments to support projects like affordable housing and job creation, and after-school programs, both of which have benefited low-income African Americans. The budget also proposes eliminating the Minority Business Development Agency, which supports minority-owned businesses and whose demise could affect the black middle class.

In a statement last week, the CBC argued that the budget left much to be desired. The president’s proposal “is not a new deal for African Americans,” it said. “It’s a raw deal that robs the poor and the middle-class to pay the richest of the rich.” The CBC has released an alternative budget proposal, authored by Rep. Bobby Scott (D-Va.), that claims to better support black Americans.

The meeting with the Trump administration comes at a moment of increased importance for the CBC, which has seen its profile rise in recent months as its members have spoken out against the president and his political appointees. The caucus currently accounts for roughly one quarter of Democrats in Congress, making it a key political actor as the party charts its course in the Trump era.