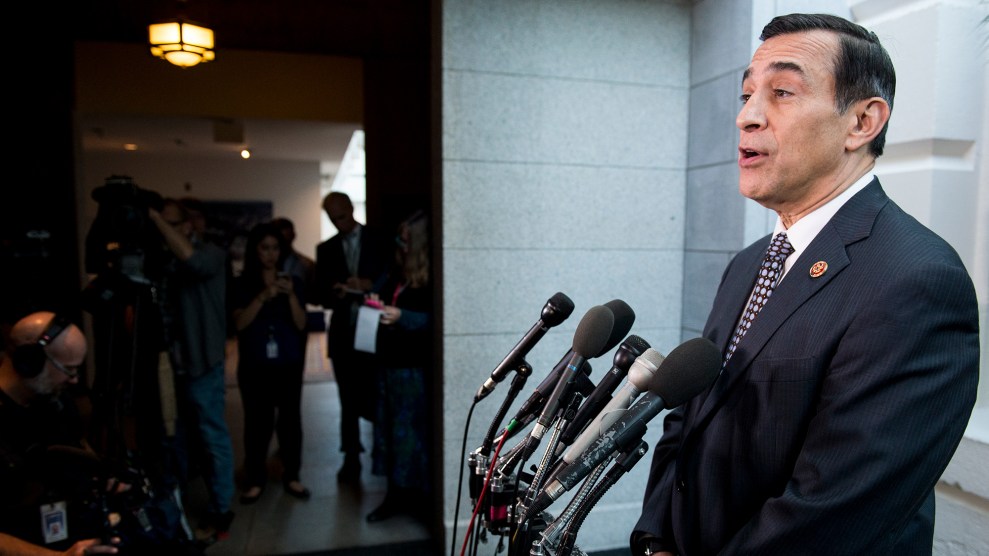 Mike Levin preempted his bid to take on the wealthiest man in Congress by trolling him. “Over the holiday season, I sent Darrell Issa a book called Climate Change for Beginners,” Levin says. “It’s a 150-page book, illustrated. It’s got pictures,” he notes, adding that he hoped it would prod Issa, a nine-term Republican congressman who represents parts of California’s Orange and San Diego counties, to correct his claim to being “unsure of the science” behind climate change.

This week, Levin, a Democratic activist and environmental lawyer, announced that he hopes to challenge Issa in 2018 because, as he tweeted on Wednesday, “I care deeply about the type of country my young kids grow up in.” His decision comes at a challenging time for Issa. Since he was narrowly reelected in November, Issa has been facing mounting pressure inside his district. Protesters have gathered outside his Vista office on a weekly basis. In February, a GoFundMe campaign raised $6,000 to buy a full-page ad in the San Diego Union-Tribune urging Issa to attend a town hall meeting. He didn’t show, citing a “long-standing obligation” to tour a homeless shelter. Francine Busby, chair of the San Diego County Democratic Party, told me last week, “He’s definitely feeling the heat down here.”

Levin is an environmental lawyer who started an Orange County trade organization for the clean energy industry and is on the board of the California Hydrogen Business Council. (He drives a hydrogen-powered car.) He’s spent more than a decade volunteering for Democratic campaigns at the local, state, and national levels, and he previously served as the executive director of the Democratic Party of Orange County. Though he considered running for Issa’s seat in both 2012 and 2014, he says Donald Trump’s victory and Issa’s embrace of the president created the urgency for him to take the plunge. He says any Democratic effort to take the House in the midterms will have to include California’s 49th District.

Issa recently made an apparent about-face on climate change, but Levin’s not buying it. In 2013, Issa received the League of Conservation Voters’ “Climate Change Denier” award. Yet this month, he joined the Climate Solutions Caucus, a bipartisan group of lawmakers dedicated to fighting climate change. “I find the whole thing typical of what Darrell Issa does,” says Levin. He points to Issa calling for an independent investigation into Russia’s role in the 2016 election and his subsequent walk-back of those comments. “He’ll say something that on its face sounds good—whether it’s, ‘I joined the Climate Solutions Caucus,’ or, ‘I have a replacement for Obamacare,’ or, ‘We need an independent independent investigation’—but when you peel back the onion, it’s awful.”

But before Levin can get to Issa, he’ll first have to face Doug Applegate, the political newcomer who came within a percentage point of besting Issa in the November election. Applegate, a former Marine colonel, has bona fide military cred, and used it to gain support in the district, which incudes the Camp Pendleton Marine Corps base. Levin lacks military experience but says he soon will be “announcing military endorsements in the military community.”

But the Issa-Applegate race devolved into a series of personal attacks, and Levin believes he’ll be able to avoid that. “I have tried to live my life to the highest ethical standards,” he says, adding that any mud Issa’s team slings at him will have to be about the issues. “I believe this race ultimately will be about who can be the strongest opponent against Darrell Issa, who can run the best campaign and who can stay on offense and keep the focus on Darrell Issa’s record and positions that are contrary to the majority of voters in the district.”

There’s still more than a year before the 2018 campaign season will heat up. But if his narrow win in 2016 is any indicator, the changing climate Issa should be most worried about is in his own backyard.