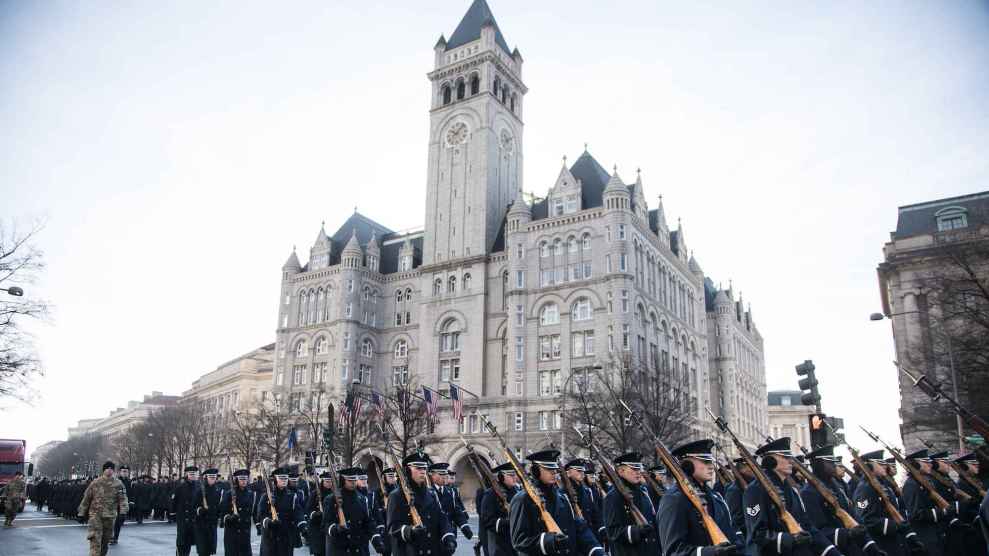 A military parade in front of the Trump International Hotel during the presidential inauguration festivities.Jeff Malet/ZUMA

A Washington, DC, wine bar is suing President Donald Trump over his nearby hotel, which it claims has an “unfair” competitive advantage that violates the hotel’s lease with the federal government. The owners of Cork Wine Bar, located 1.5 miles north of the Trump International Hotel, announced at a press conference this morning that they have filed a lawsuit alleging that the power of Trump’s public office and simultaneous ownership of the restaurants at his Pennsylvania Avenue hotel are hurting other restaurants and bars in Washington for his personal benefit.

“We all know that Washington, DC, is a company town,” said Khalid Pitts, who owns the wine bar with his wife, Diane Gross. “It’s the center of business and the government, with the president being the principal focus of attention.”

Pitts noted that the many lobbying and interest groups in town, including foreign governments, are constantly vying for advantages with top US officials. “They have a choice on where to dine and where to hold events. Why wouldn’t they go to a place that most pleases the president of the United States or where he’s known to frequent?”

Pitts and Gross declined to put an exact dollar figure on their losses attributable to the Trump hotel, which opened in September but only since Trump’s inauguration has seemed to thrive. Both said they have noticed a decline, however, one that was significant after 10 years of restaurant ownership and couldn’t be traced to normal competition from other restaurants or seasonal changes. Since Trump’s election in November, multiple foreign diplomatic events have moved to the Trump hotel, and the lobby bar has become a regular hangout for lobbyists looking to connect with members of Trump’s inner circle, including chief of staff Reince Priebus. According to the Associated Press, several Trump Cabinet members are living at the hotel. During the inaugural festivities in January, the Trump hotel was ground zero for VIPs attending the ceremony, and Trump’s children mingled there with big donors and Trump’s foreign business partners.

Trump has dined at the hotel numerous times, and his aides have touted it as a destination for those visiting Washington.

The lawsuit is not related to a lawsuit filed in New York City in January alleging that Trump is violating the Constitution’s Emoluments Clause, which prohibits federal officials from recieving financial benefits from foreign governments. The new suit does not seek any monetary damages, just a court order mandating that the unfair competition be halted.

A key aspect of the lawsuit is Trump’s continued ownership of the hotel, which occupies a government-owned building that Trump leases from the federal government. That lease appears to prohibit any elected federal office-holder from benefiting from the lease, a clause which Cork’s attorneys say was put into the contract to help avoid this very type of situation, where a government official could be giving the business a boost.

“Whether it was at a press conference, whether it was in a meeting with a member of the House of Representatives, the overall promotion of the business enterprises is steady, unrelenting, and unapologetic,” said Steven Schooner, a George Washington University law professor and another attorney for the couple.

Although Trump pledged to remove himself from the daily operation of his businesses, he is still the majority owner of the hotel—his adult children have a small stake in the operation—which means he is also named personally in the lawsuit. Presidents are shielded from lawsuits against actions they have taken in their official capacity but can be sued for activities undertaken as private citizens. For the case to proceed, Trump will have to be served with the lawsuit personally.

Alan Garten, an attorney for the Trump Organization, told CNN that the Cork lawsuit was “a wild publicity stunt completely lacking in legal merit.” Asked about the criticism, Zaid cracked that “everything he seems to do is a wild publicity stunt, so we’re in good company.”

Pitts, who has previously worked for the Service Employees International Union and more recently as the political director for the Sierra Club, acknowledged that there will be blowback and accusations that the lawsuit is politically motivated.