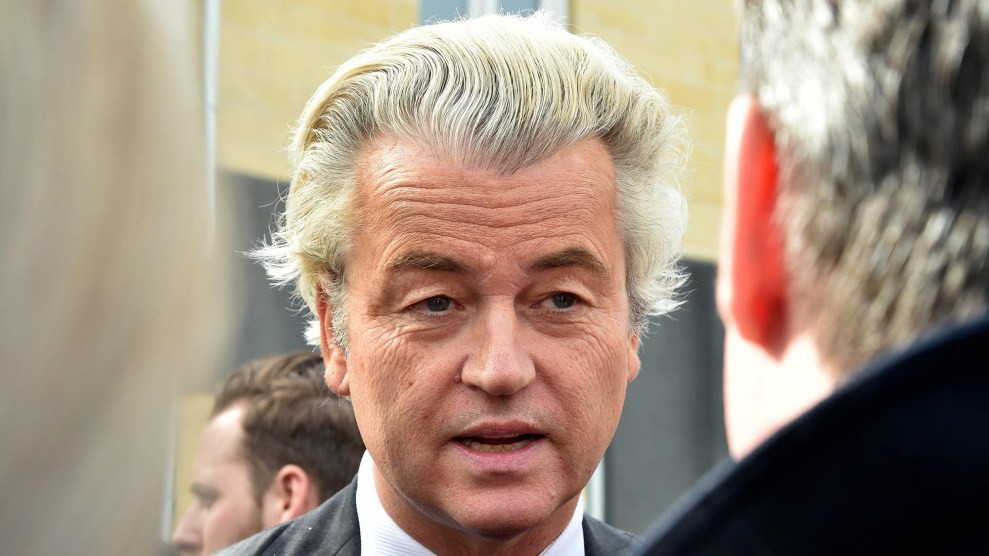 Whether Geert Wilders becomes the Netherlands' next prime minister or not, he's already succeeded in pulling the country's politics to the right.Maxppp/Zuma

The Dutch are headed to the polls Wednesday, and the election in this country of nearly 17 million people could offer a window into the strength of far-right candidates in other European elections this year. The Netherlands, France, Germany, and possibly Italy have upcoming elections in which mainstream parties are facing unusually strong challenges from nationalist candidates who urge distance from the European Union, condemn the presence of immigrants, and celebrate the victory of Donald Trump.

In the Netherlands, voters will decide whether the wild-haired and xenophobic Geert Wilders—dubbed by some as the Dutch Trump—should be their next prime minister. Wilders has advocated pulling the Netherlands out of the EU and freezing immigration. Wilders has, at times, led the polls, but has fallen in the polls of late.

“I think it’s a good indicator—because he’s been around for a while—of how well this kind of nationalist movement is doing in western Europe,” says Stan Veuger, a resident scholar at the American Enterprise Institute who has written about the Dutch elections and Wilders. “Second, after Brexit and Trump, people expect every election to now go for the nationalist option, and that in and of itself generates interest. And third, if [Wilders] did do really well, which the polls don’t seem to suggest, it would have important implications for the EU and the Eurozone.”

The reclusive 53-year-old has, at times, led in the polls, and Wilders’ brash rhetoric—he recently called Moroccans “scum” and called on supporters to make the Netherlands “ours again”—has earned him outsize attention in a race that he’s unlikely to win. According to a recent profile in the New York Times, he limits his public appearances due to threats made against him after his incendiary remarks. There are about 10 leading candidates among the 28 parties (and more than 1,000 candidates) on the ballot in the race Wednesday. In order to win, Wilders’ Party of Freedom would not only need to pick up more parliamentary seats than expected, it would also face the difficult task of convincing as many as five other parties to join a coalition government.

The comparisons between Wilders and Trump go beyond their policies and their hair; both have adeptly used social media and a populist style to mobilize their supporters. But as Sarah de Lange, a political science professor at the University of Amsterdam told the Times, there are differences, too. “Internationally, he’s compared to Trump,” she said. “But with Wilders every tweet is thought through, calculated. With Trump it’s emotional.”

Wilders has also gained some support among conservatives in the United States. Some have gone so far as helping to fund his election efforts, spurring criticism by those in the Netherlands who decry American interference in the political process. “It’s foreign interference in our democracy,” Ronald van Raak, a senior member of Parliament, told the Times. “We would not have thought that people from other countries would have been interested in our politics. Maybe we underestimated ourselves.”

Wilders attended the Republican National Convention in Cleveland and, on Sunday, Rep. Steve King (R-Iowa) tweeted this racist message in support of Wilders:

Wilders understands that culture and demographics are our destiny. We can’t restore our civilization with somebody else’s babies. https://t.co/4nxLipafWO

When asked about comparisons between Trump and Wilders on Monday, and what the president thought of Europe’s populist candidates, White House Press Secretary Sean Spicer said, “We’ll allow sovereign nations to have their elections without interference from us.” On Tuesday, when asked about King’s tweet from Sunday, Spicer said, “The president believes this is not a point of view that he shares. He believes he is the president for all Americans.”

Whatever the outcome, Wilders’ candidacy has moved politics in the normally progressive and tolerant country to the right. “Wilders is making sure he remains ‘dirty’ enough not to go into the government, but the three mainstream parties are picking up some elements of his program,” said Pieter Cleppe, head of the Brussels Office of Open Europe, a London-based think tank. Cleppe made the comments in a Q&A with the Council on Foreign Relations, noting that Wilders’ impact on Dutch policy going forward could be limited if the other parties manage to form a government without him. The Dutch establishment thinks that Wilders’ support has a ceiling, and “will just fade away over time,” Cleppe said. “At least that’s what they hope.”

That approach could backfire, though, and casting Wilders’ as an outsider might strengthen his position over time, Cleppe added.”What may happen, however, is that four or five years down the line, Wilders could be strengthened because he’s been the only opposition.”

But what if Wilders, like Trump, defies the polls and scores an upset victory? “It will likely give a boost to far-Right populist candidates in France and Germany,” writes Martyn Kreider of the EU Centre on Shared Complex Challenges at the University of Melbourne. That sort of boost—on top of the fallout from Brexit and Trump’s skepticism about the EU—would also be a win for Russian President Vladimir Putin, who is widely seem as seeking to undermine EU cohesion and NATO. Western governments fear that Putin plans to meddle in these European elections the way he’s alleged to have done in the US.

“A strong, coordinated Europe is in Putin’s interest only if it is ideologically favorable to him—with cultural nativists such as [French presidential candidate] Marine Le Pen, Geert Wilders and [Hungarian Prime Minister] Viktor Orban calling the shots,” Natalie Nougayrede, a columnist with the Guardian, wrote earlier this year. “If liberal democracy can resist, however, especially in France and Germany, then he will continue working to achieve a weak and fractured Europe.”