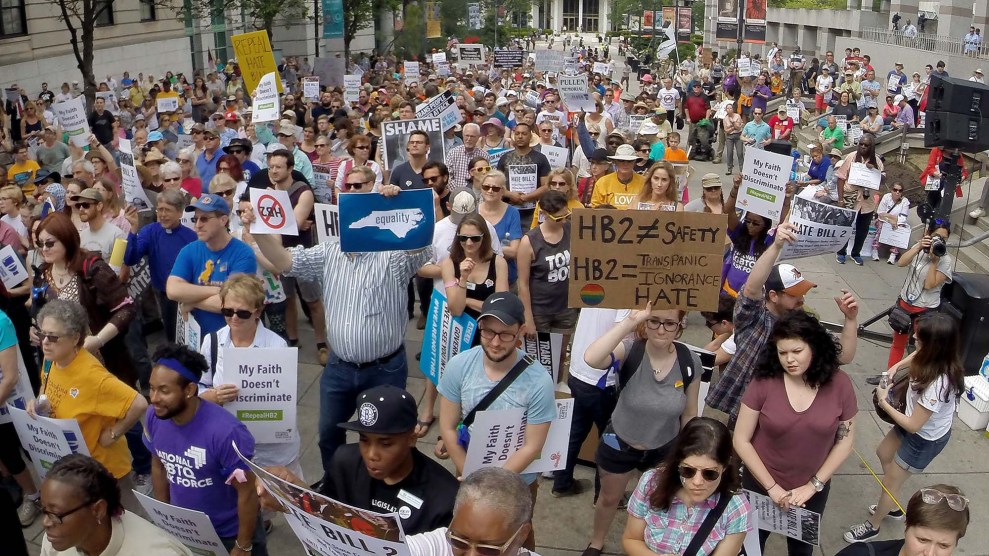 North Carolina is at it again. On Thursday, state lawmakers approved legislation repealing House Bill 2, the controversial law that banned cities and counties from passing nondiscrimination ordinances and barred transgender people from using public bathrooms that correspond to their gender identity.

“It doesn’t matter if you have a ‘D’ or ‘R’ next to your name. If you vote for this bill, you won’t be a friend to the LGBT or civil rights community.”

Under a deal that Democratic Gov. Roy Cooper struck with Republican leaders in the Legislature Wednesday night, HB 2 would technically be repealed. But it would be replaced with new legislation that LGBT rights advocates say is just as bad. The new bill, which now heads to the governor’s desk for approval, would prohibit any entity other than the state government from regulating access to bathrooms or changing facilities. Essentially, it would prohibit cities from taking action to protect the rights of transgender people to use the appropriate bathroom. Additionally, it would prohibit local governments from passing any regulations regarding access to public space or private employment practices until 2020. (HB 2 was originally passed in response to a Charlotte ordinance that was designed to protect LGBT rights.)

LGBT advocates and their allies say the new proposal isn’t a compromise at all—they’re actually calling it HB 2.0.

“This so-called compromise it not a repeal,” said Reverend William Barber, the head of North Carolina’s NAACP, on a conference call set up by opponents of the deal. “It’s a Trojan horse, and we can never compromise on fundamental civil rights.” Barber has been one of the most prominent voices in the fight against HB 2.

HB 2 sparked a nation-wide backlash, including an economic boycott, after it was signed by GOP Gov. Pat McCrory last year. Republican lawmakers have downplayed the financial impact of conferences and events avoiding North Carolina in response to HB 2, but the Associated Press reported earlier this week that the state will lose an estimated $3.76 billion over 12 years.

The last-minute compromise comes as the National Collegiate Athletic Association is determining where to hold its championship events for the next five years. In response to HB 2’s passage last year, the NCAA removed seven scheduled sporting events from North Carolina. It’s given the state a Thursday deadline to repeal the law if it wants to be considered for the future events. The NCAA didn’t respond to questions about whether the new legislation is sufficient to address its concerns.

In a statement, Cooper said the bill is “not a perfect deal” but begins “to repair our reputation.”

LGBT advocates aren’t buying it. They point out that Cooper was elected in large part because his GOP predecessor was was a strong supporter of HB 2.

“Governor Cooper and legislators must be grownups…and not vote for or sign a bill that merely doubles down on discrimination,” Chris Sgro, executive director of Equality NC, said on the call. “We know that it doesn’t matter if you have a ‘D’ or ‘R’ next to your name. If you vote for this bill, you won’t be a friend to the LGBT or civil rights community.”

The bill, assuming Cooper signs it, appears likely to end up in court. The compromise legislation “in many ways mirrors the Colorado law that was struck down by the Supreme Court in 1996,” said Chad Griffin, the president of the Human Rights campaign. “That was a law that also banned any city, town, or county in the state of Colorado from protecting gay or bisexual people from discrimination.”

Correction: An earlier version of this article misstated the time period over which North Carolina would lose $3.76 billion.