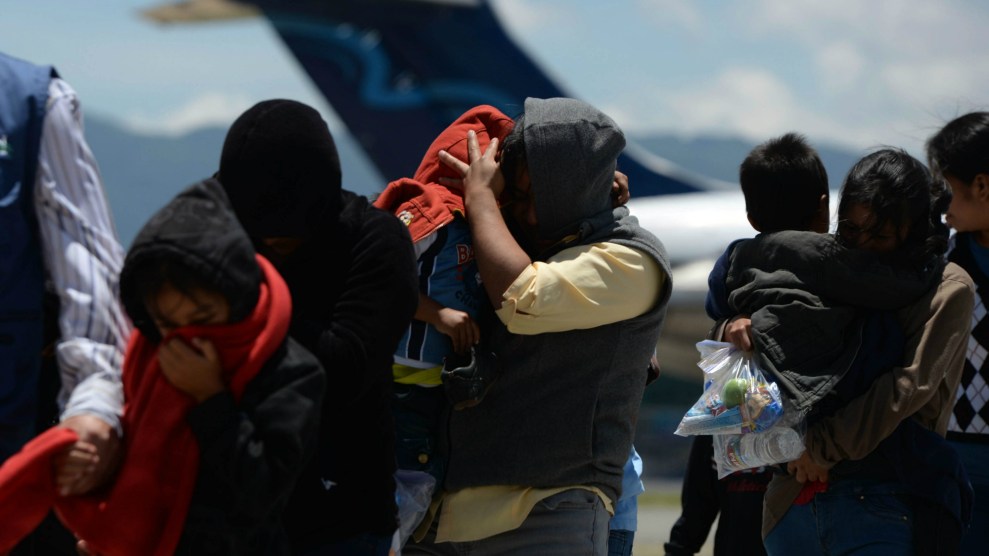 A group of women and children arrive in Guatemala after being deported from the United States in 2014. Advocates say Trump administration policies will have a particularly negative effect on undocumented women and children fleeing violence. Esteban Biba/EFE via ZUMA

On February 9, Irvin Gonzalez left the domestic violence shelter where she was staying in El Paso, Texas, to travel to the local courthouse. Gonzalez, a transgender woman, had told the police that her ex-boyfriend had punched, kicked, and strangled her on multiple occasions and had once chased her with a knife. Now, she was seeking a protective order against him from the court.

Arriving at the courthouse, Gonzalez went to the 10th floor for her hearing. Outside the courtroom stood an US Immigration and Customs Enforcement officer. Gonzalez’s caseworker told her that the officer was there to arrest her.

Gonzalez, an undocumented immigrant from Mexico, had been deported multiple times since 2010. “I had a hard time understanding some of the judge’s questions because I was thinking about the ICE officer outside,” she recently told the New Yorker. The judge granted her request for a protective order, but before she left the courthouse, Gonzalez was detained by ICE. She has since been indicted on charges of illegal reentry. According to the Huffington Post, if convicted, Gonzalez could face up to 10 years in prison. Gonzalez says that her ex-boyfriend and alleged abuser alerted immigration officers to her whereabouts.

For advocates working with immigrant victims of violence, the El Paso incident realized their greatest fears. Gonzalez’s arrest “lends credibility to the threats of abusers,” says Cecilia Friedman Levin, senior policy counsel for ASISTA, which supports immigration advocates and attorneys working with domestic violence victims. She notes that domestic abusers often use immigration status to trap their undocumented partners in abusive relationships. “It puts enormous power and control in the hands of the abuser to say, ‘See what happened in El Paso? The same thing is going to happen to you if you reach out for help,'” she says. (ICE has maintained that Gonzalez has a criminal record and that the courthouse was the only place where officers knew they could find her.)

The Trump administration’s actions have worsened those fears. Shortly after Gonzalez’s arrest came to national attention, the Department of Homeland Security released a pair of memos outlining how it would implement the president’s executive orders on immigration. The memos appeared to remove existing protections for immigrant victims of violent crimes like domestic abuse. “What we really are seeing is a shift in a much broader enforcement priority that is not taking into account survivors of domestic violence,” says Terra Slavin of the Los Angeles LGBT Center, a group that works with LGBT immigrants. “We don’t know fully how this is going to roll out.”

Under the Violence Against Women Act, or VAWA, immigrant victims of domestic violence can qualify for special protections. U-visas, for example,  help victims live independently of their abusers by providing them with work authorization and temporary legal status on the condition that they assist law enforcement in any related investigation. There are a limited number of these visas available each year, but many applicants are able to avoid deportation while they await a final decision on their application. VAWA also prohibits DHS from using information from an undocumented immigrant’s abuser to arrest or deport the victim, unless the victim has been convicted of serious crimes.

But the February implementation memos released by Homeland Security Secretary John Kelly stated that “the Department no longer will exempt classes or categories of removable aliens from potential enforcement.” The orders rescinded all conflicting immigration enforcement guidance issued by the Obama administration, with the exception of a measure exempting beneficiaries of the Deferred Action for Childhood Arrivals program, which protects undocumented immigrants brought to the country as children, and another guidance outlining sensitive locations where ICE should avoid operating.

In an analysis of the DHS memos, the Tahirih Justice Center, a nonprofit serving immigrant women and girls fleeing gender-based violence, said that Kelly’s directives appeared to rescind an ICE guidance issued in 2011 that protected immigrant victims of domestic violence and other crimes. That guidance said that “ICE officers, special agents, and attorneys should exercise all appropriate prosecutorial discretion to minimize any effect that immigration enforcement may have on the willingness and ability of victims, witnesses, and plaintiffs to call police and pursue justice.”

An ICE representative told Mother Jones that the protections from that guidance were still in effect. “U.S. Immigration and Customs Enforcement (ICE) officers will take into consideration if an individual is the immediate victim or witness to a crime, in determining whether to take enforcement action. Particular attention is paid to victims of domestic violence, human trafficking or other serious crimes,” the agency said in an emailed statement.

But ICE’s public activity has not made the agency’s stance on crime victims clear. In recent weeks, advocates say, the agency has been reluctant to share information about what protections it still has in place for immigrants. Instead, it has focused attention on its plans to ramp up deportations.

“My concern as we see these new executive orders and DHS guidance is that it leads to fear where people feel like they cannot access help,” says Rosie Hidalgo, public policy director at Casa de Esperanza, which works with immigrant victims of domestic abuse. “It just strengthens and emboldens those who might exploit those who are vulnerable.”

“A climate of fear has erupted across the country and among our clients,” says Archi Pyati, chief of policy and programs at the Tahirih Justice Center. “They are very scared to engage in everyday activities for fear they could be arrested and deported, even though they are working with attorneys to regularize their status.” According to a recent BuzzFeed report, the Tahirih Justice Center received 620 calls for assistance in the first two months of 2017, compared with 877 calls in all of 2015.

The heightened immigration enforcement “undermines public safety, and creates an environment where people are not going to feel safe reaching out for help.”

In the weeks since the president’s immigration orders were first announced, undocumented domestic violence victims have backed out of cases for fear of drawing the attention of immigration enforcement agents. Four domestic violence cases in Denver were dropped recently after victims refused to cooperate with law enforcement. At least one domestic violence victim in Travis County, Texas, has hesitated to move forward with a case, citing similar concerns. More broadly, immigrants have begun to retreat from courthouses to avoid being detained and deported by ICE. There have been several recent reports of ICE arrests of undocumented immigrants in courthouses, although not of arrests of victims of domestic violence, outside of the El Paso case.

Advocates worry that a “chilling effect” on reporting of crimes will become more pronounced as aggressive immigration actions continue, straining the relationship between local law enforcement and immigrant communities. “[Heightened immigration enforcement] creates fear in accessing the systems, in accessing the protections,” says Levin, adding, “This undermines public safety, and creates an environment where people are not going to feel safe reaching out for help.”

Advocates argue that the situation requires a stronger response from the administration. On March 8, a coalition of more than 560 groups sent a letter to DHS and ICE stating that the recent executive orders and implementation memos “fail to protect immigrant victims of crime, reduce the likelihood of immigrant victims or witnesses reporting crimes, empower traffickers and abusers, contravene existing protections afforded by law, and create unprecedented fear for immigrant families and communities.” The letter also requested that DHS publicly clarify the protections available to immigrant domestic violence survivors.

A similar effort is underway in Congress. Earlier this month, 30 members of the House of Representatives, led by Rep. Val Demings (D-Fla.) and Rep. Kathleen Rice (D-N.Y.), submitted a letter to ICE, calling for the agency “to issue guidance making clear to ICE officers, special agents, and attorneys that victims of crimes should have no fear of seeking justice in our court systems.”

But securing public affirmation of the agency’s stance may be difficult. The administration has focused attention on crimes committed by immigrants. During his address to Congress earlier this month, Trump called for DHS to establish an office assisting victims of crimes committed by immigrants, despite data suggesting that immigrants commit crimes at lower rates than native-born citizens. The only mention of gender-based violence in the revised travel ban issued by the White House earlier this month referred to acts committed by “foreign nationals.” Asked if ICE would consider issuing new guidance outlining the protections available to domestic violence survivors and other victims of crime, an agency spokesperson declined to comment.

For now, advocates are focused on limiting the fallout. “Beyond the letter of the actual orders and the laws that will come, they have already done a lot of damage and have already made women and children fleeing violence less safe,” says Pyati. “I can only hope that we can reverse that in the coming months.”