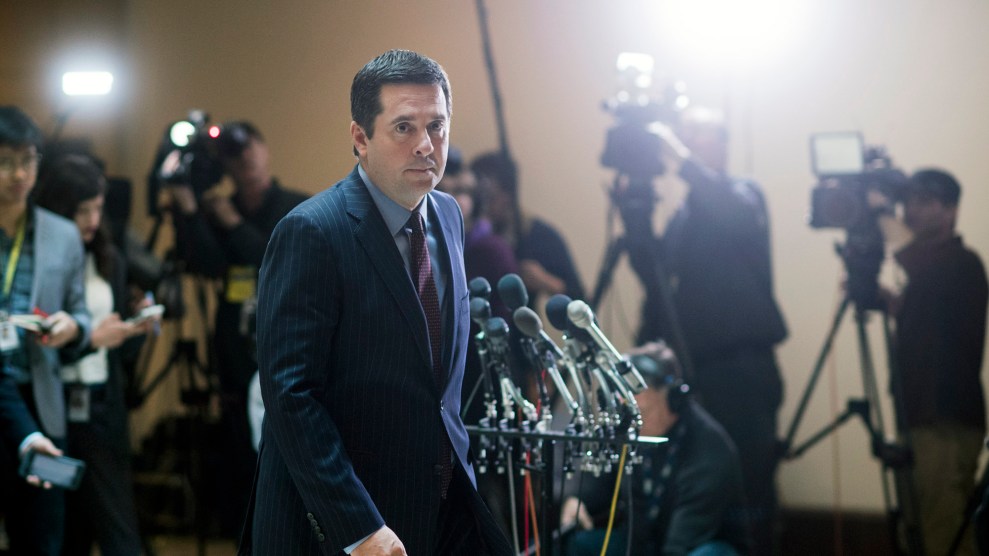 On Wednesday afternoon, Rep. Devin Nunes (R-Calif.), the chair of the House intelligence committee, blew up the congressional intelligence oversight process. On Thursday morning, at a private committee meeting, he apologized to his colleagues. But, according to a committee source, Nunes would not say what he thought he had done wrong or explain his actions.

Without consulting with the members of his committee—Republicans and Democrats—Nunes on Wednesday held two press conferences, during which he claimed he had been given information indicating that members of Donald Trump’s presidential transition team, including possibly Trump, were picked up during lawfully authorized intelligence surveillance of other targets and that their identities were disclosed in intelligence reporting based on these intercepts. Nunes also rushed to the White House to share this information with Trump.

“A credible investigation cannot be conducted this way.”

With these actions, Nunes committed multiple wrongs. He may have disclosed classified information (only two days after railing against leaks during a public hearing on the Trump-Russia scandal and Moscow’s interference in the 2016 campaign). He blindsided his committee’s members and violated the long-standing tradition of bipartisan cooperation within the intelligence committees. He possibly mischaracterized the information he claimed to have. (Rep. Adam Schiff (Calif.), the senior Democrat on the panel, later said it was not clear the identities of the Trump associates were actually “unmasked” in the intelligence reports. Also, the unmasking of people who are captured in what’s known as “incidental collection” can under certain circumstances be disclosed within classified intelligence reports.)

Moreover, Nunes’ actions were widely considered a political stunt designed to provide Trump cover for his evidence-free tweets accusing President Barack Obama of having illegally wiretapped him in Trump Tower prior to the election. Indeed, Trump claimed that Nunes’ information “somewhat” vindicated him. (Nunes’ statements did nothing of the sort. He was referring to legal surveillance requested by the FBI or another intelligence agency and authorized by a special court.)

I’d bet a good lawyer could make a great case out of the fact that President Obama was tapping my phones in October, just prior to Election!

After the Thursday morning meeting, Rep. Jackie Speier (Calif.), one of the committee’s Democrats, told reporters that Nunes had apologized to committee members. Another committee source confirms that Nunes did express his regrets but adds that Nunes would not tell committee members where the information he cited had come from. Nunes did promise, according to this source, that he would share the material with his colleagues on Friday.

This is an important point. According to the committee source, Nunes did not tell his staffers about this information prior to his Wednesday press conferences. He went rogue. That would suggest that the information was given to him directly—which would be an unusual occurrence. In most cases involving an intelligence community official or employee bringing information to the committee, a staffer would handle the matter first. There has been widespread speculation among intelligence world observers that the White House may have sent the material Nunes’ way. So its origins could be a telling piece of information.

Nunes’ disclosure on Wednesday created a major rift in a committee already racked with tension. After Nunes’ press conferences, Schiff declared that he had “grave concerns” and suggested Nunes was acting as a “surrogate for Trump.” He questioned whether Nunes could be a fair and independent manager of the Russia-Trump probe. “A credible investigation cannot be conducted this way,” he said in a statement.

Nunes and other Republicans on the committee have downplayed the Trump-Russia scandal. At Monday’s hearing, they focused almost entirely on the subject of the leak of classified information that revealed that then-national security adviser Michael Flynn had lied when he denied he had spoken to the Russian ambassador about the sanctions Obama imposed on Russia for Moscow’s meddling in the 2016 election. (Right after the hearing, Nunes even said he had never heard of Carter Page and Roger Stone, two main figures in the scandal.) Democrats, on the other hand, zeroed in on Russia’s attack on the election and the connections between Trump associates and Russia. After Nunes’ press conferences on Wednesday, Schiff insisted that there is more than circumstantial evidence now” of coordination between Moscow and Trump associates. (On Wednesday night, CNN reported the FBI “has information that indicates associates of President Donald Trump communicated with suspected Russian operatives to possibly coordinate the release of information damaging to Hillary Clinton’s campaign.”

Nunes’ apology is not likely to heal the wounds he inflicted with his unprecedented move. He may have killed any chance there was for his committee to mount an effective and independent probe and bolstered the case for a special select committee or an independent commission. And he still has more explaining to do—to committee members and to the public.