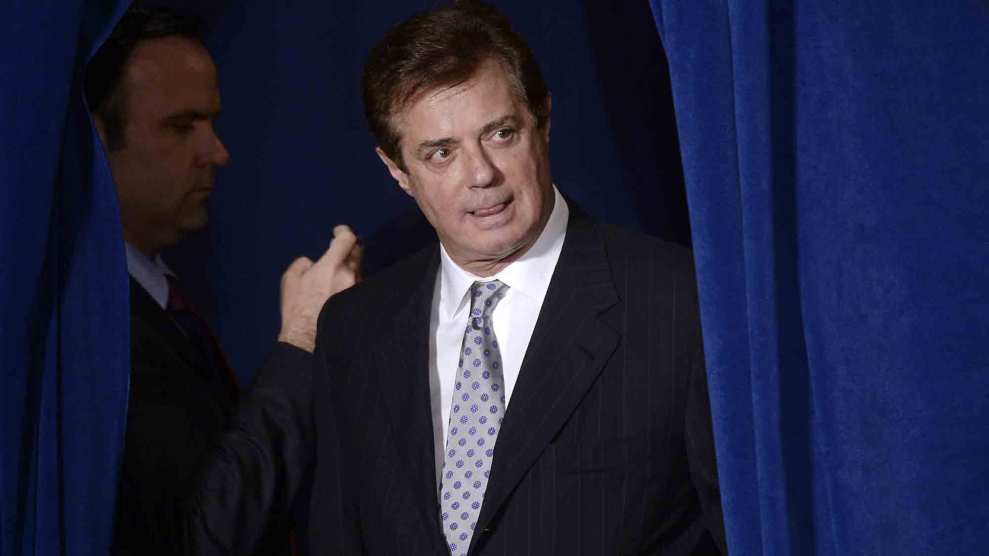 On Wednesday morning, the Associated Press released a bombshell report revealing that Paul Manafort, who ran Donald Trump’s campaign for several months, had secretly worked for a Russian billionaire a decade ago to promote Russian leader Vladimir Putin. The news service noted that Manafort “proposed in a confidential strategy plan…that he would influence politics, business dealings and news coverage inside the United States, Europe and the former Soviet republics to benefit the Putin government.” Manafort pitched this idea to Russian oligarch Oleg Deripaska, a close Putin ally, and in 2006 signed a $10 million annual contract for the project. The AP’s report shows Trump’s campaign was managed by an operative who had received millions from a Putin crony to bolster the Russian leader’s image in the United States at a time when US-Russia relations were tense.

Manafort’s relationship with Deripaska began at least several years before they inked this contract when the Russian oligarch was banned from entering the United States due to his suspected connections to Russian organized crime. In the early 2000s, the aluminum magnate enlisted Manafort, a veteran lobbyist and fixer with a reputation for representing foreign despots and thugs, to help him secure a visa so he could travel to the United States, according to a source with knowledge of the arrangement,

In the late 1990s, the US State Department had refused to allow Deripaska (reportedly one of the richest men in Russia) visit the United States. As the Guardian reported in 2008:

A senior former State Department official said US officials who considered Deripaska’s case in 1998 believed he was associated with several Russians involved in organised crime, including Anton Malevsky, head of the notorious Ismailovskaya Brotherhood. Others believed by the US authorities to be his associates were involved in the so-called Aluminium Wars during the mid-1990s which resulted in dozens of killings. Deripaska has always strenuously denied any links to organised crime.

The State Department official said: “There are four grounds that are relevant in Deripaska’s case. Number three is, does this person have criminal associations and relationships? That’s the one that applied to Deripaska.”

In 2000, Deripaska, who was looking to list his company on the London Stock Exchange, hired former US Senator Bob Dole and the law and lobbying firm of Alston & Bird, where Dole worked, to bolster his image and lobby the State Department. Dole won permission for Deripaska to make a short trip to the United States in December 2000, and the oligarch delivered lectures at Harvard University and a Washington, DC think tank. But, according to the Guardian, Deripaska, during this visit, was “interviewed by the FBI, which led to a second ban on his entering the US.”

This is about the time when Manafort began assisting Deripaska on the visa issue, according to the source with knowledge of this deal. Manafort also retained a publicity expert to generate positive stories about Deripaska, this source said.

The Deripaska visa matter continued on for years, and Deripaska kept Dole and his firm on the payroll. In 2005, Alston & Bird was paid about $260,000 for its work on behalf of Deripaska. That year, the oligarch received a multi-entry visa, in part so he could talk to FBI investigators. But in July 2006, the visa was revoked. The Wall Street Journal reported this happened after “concerns were raised about the accuracy of statements he made in a meeting with the Federal Bureau of Investigation.”

In 2006, Manafort’s business partner at the time, Rick Davis, set up meetings overseas between Sen. John McCain, a harsh Putin critic, and Deripaska. A McCain aide later said these were just “social and incidental” contacts that occurred while McCain was traveling abroad on official business.

Deripaska did get into the United States in 2009—under unusual circumstances. The Journal reported that Deripaska, who was “barred entry to the US for years due to US government concerns about possible ties to organized crime” had “visited the country twice this year under secret arrangements made by the Federal Bureau of Investigation.” The newspaper noted:

Aluminum magnate Oleg Deripaska met with FBI agents in August and earlier this month as part of a continuing criminal probe, according to two administration officials. The focus of that probe couldn’t be learned.

Mr. Deripaska used the opportunity of his recent US visits to meet with top executives of U.S. investment banks Morgan Stanley and Goldman Sachs Group Inc. The aluminum giant he controls, UC Rusal, is preparing for an initial public offering, a vital part of Mr. Deripaska’s efforts to save his debt-burdened business…

Mr. Deripaska’s recent visits were arranged outside of regular State Department visa procedures because the US. continues to have concerns about Mr. Deripaska’s business associations, according to administration officials. Instead, FBI officials arranged for a limited-entry permit from the U.S. Department of Homeland Security, as allowed in special cases related to sensitive matters, officials said.

Another person familiar with the case said there was some opposition from other US agencies to Mr. Deripaska’s visits, but that the FBI prevailed. The FBI had previously been at loggerheads with the State Department over Mr. Deripaska; FBI officials have said they were getting interesting information from him, this person said.

This did not ultimately resolve the issue. In 2010, Deripaska remained banned from regular travel to the United States, and the Russian foreign ministry retained another DC lobbying firm to work on this.

The AP reported that Manafort maintained a business relationship with Deripaska until at least 2009, though “they had a falling out laid bare in 2014 in a Cayman Islands bankruptcy court. The billionaire gave Manafort nearly $19 million to invest in a Ukrainian TV company called Black Sea Cable, according to legal filings by Deripaska’s representatives. It said that after taking the money, Manafort and his associates stopped responding to Deripaska’s queries about how the funds had been used.” The news service also noted that “Manafort did not disclose details about the lobbying work to the Justice Department during the period the contract was in place,” and it pointed out under “the Foreign Agents Registration Act, people who lobby in the US on behalf of foreign political leaders or political parties must provide detailed reports about their actions to the department. Willfully failing to register is a felony and can result in up to five years in prison and a fine of up to $250,000, though the government rarely files criminal charges.”

Manafort told AP, “I worked with Oleg Deripaska almost a decade ago representing him on business and personal matters in countries where he had investments. My work for Mr. Deripaska did not involve representing Russia’s political interests.” Manafort did not respond to a Mother Jones request for comment regarding his work for Deripaska on the visa issue.

A spokesman for Manafort did forward a general statement Manafort had sent to reporters: “I have always publicly acknowledged that I worked for Mr. Deripaska and his company, Rusal, to advance its interests. For example, one of the projects involved supporting a referendum in Montenegro that allowed that country to choose membership in the EU, a measure that Russia opposed. I did not work for the Russian government. Once again, smear and innuendo are being used to paint a false picture. I look forward to meeting with those conducting serious investigations of these issues to discuss the actual facts.”

Asked if Manafort would address his work for Deripaska on the travel visa, the spokesman replied, “I do not expect I will get an answer about something that happened 15 years ago. I apologize.”