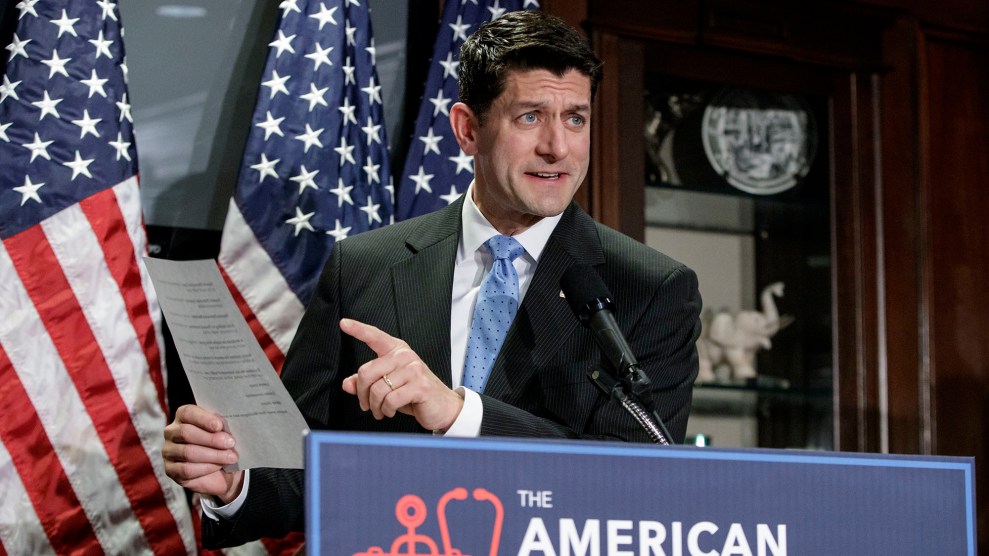 As two congressional committees began their work on the House Republicans’ health care law Wednesday, Speaker Paul Ryan (R-Wis.) told reporters that the nonpartisan Congressional Budget Office does not need to analyze the bill before Congress starts working on it. As long as the CBO releases its predictions about the bill’s impact on the insurance market and the economy before the House votes on it, Ryan said, the process will abide by standard procedure.

But Ryan had a different view eight years ago, when Democrats were crafting the Affordable Care Act. In June 2009, Ryan sent a letter to the CBO asking that it analyze—or “score”—the bill in advance of committee mark-ups. “Given the stated intention of the Majority to have Committees consider this legislation during the week of July 6, we ask that you please provide a preliminary cost estimate on this legislation by Monday, July 6,” stated the letter, signed by Ryan and three other senior Republicans.

A lot has changed in eight years. Whereas Republicans once complained that Democrats had rushed the passage of health care reform, today the Republican process is moving at warp speed. House Republicans kept their bill secret until Monday night, then scheduled two simultaneous mark-ups less than 48 hours later without CBO scoring, and hope to pass the whole thing next month. As Congress once again dives into the reform process, Republicans are rewriting the history of how the Affordable Care Act passed.

Ways and Means Committee Chairman Kevin Brady (R-Texas) on Tuesday claimed that Obamacare was “written in the dark of night and rushed through Congress”—a retelling that is clearly untrue. White House press secretary Sean Spicer has also, repeatedly, misrepresented how the Affordable Care Act passed. During Tuesday’s press briefing, Spicer four times repeated one of his favorite phrases about the Affordable Care Act, that Democrats had “jammed” their bill down people’s “throat.” He also brought up a statement from then-House Speaker Nancy Pelosi at the time —”We have to pass the bill so that you can find out what is in it”—to imply that Democrats hid the contents of the law from the public until it passed.

Spicer said Tuesday, “Unlike before, as I mentioned, when the Democrats jammed it down people’s throat and said—waited to get that 60th vote, with Sen. [Ted] Kennedy still around, and then basically said, ‘literally, you will have to wait and see what it looks like before we passed it—we not only posted it out there for everybody to look at, but by sending it through regular order, not just putting it up for a House vote, but sending it through the committee process, allows Republicans, Democrats, and independents alike to offer up amendments and suggestions.”

This characterization of the passage of the Affordable Care Act bears little resemblance to what actually happened. Democrats spent a year crafting and passing health care reform in 2009 and 2010. Along the way, they spent hundreds of hours debating the bill in committee hearings, with copious input from the CBO. The Senate did not pass the bill with the help of Kennedy, who died in August 2009; Paul Kirk, who was appointed to replace him, voted for the bill.

Pelosi’s comment did not refer literally to hiding the contents of the legislation, which would have been impossible, because at the time Pelosi made the remark in March 2010, the full text of the bill had been debated, publicly, for months and was two weeks away from becoming law. Rather, Pelosi was expressing—perhaps inartfully—her hope that once the bill passed, misinformation about reform would subside and Americans would learn about the law’s benefits.

“You’ve heard about the controversies within the bill, the process about the bill, one or the other,” Pelosi said in March 2010. “But I don’t know if you have heard that it is legislation for the future, not just about health care for America, but about a healthier America, where preventive care is not something that you have to pay a deductible for or out of pocket. Prevention, prevention, prevention—it’s about diet, not diabetes. It’s going to be very, very exciting. But we have to pass the bill so that you can find out what is in it, away from the fog of the controversy.”

Politico‘s headline from that night shows how the press initially interpreted it: “Pelosi: People won’t appreciate reform until it passes.” But her prediction was slightly off. It turns out that people didn’t fully appreciate Obamacare until it was at risk of repeal.