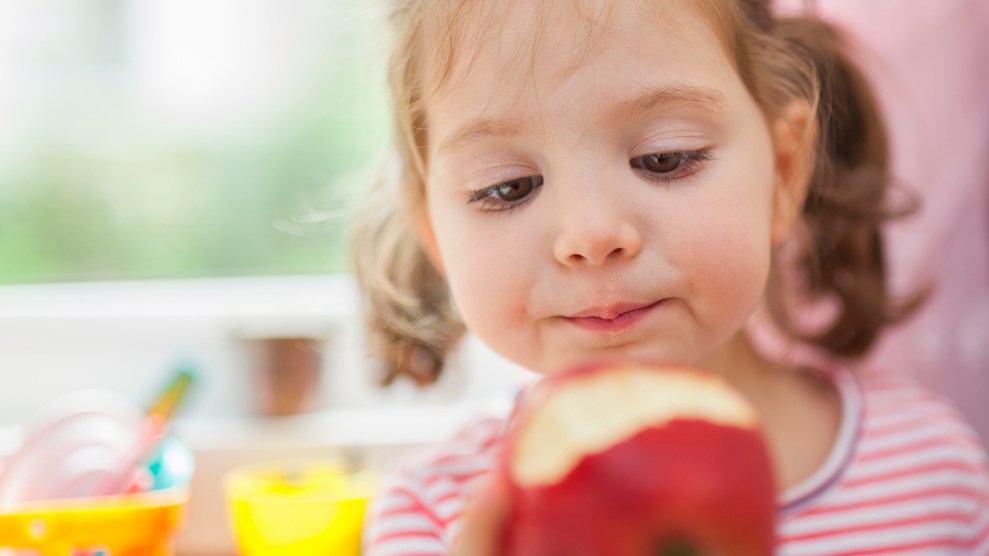 Put that apple down, you little moocher. <a href="http://www.gettyimages.com/license/523734631">KeremYucel</a>/iStock

Declaring that there’s “no demonstrable evidence” that such programs improve school performance, Mulvaney suggested that they’re an onerous burden on taxpayers that would be better eliminated. It remains unclear precisely which child-nutrition programs are on the Trump chopping block—and Mulvaney stresses in the above video that he himself is unsure. But here are some facts.

“Hunger due to insufficient food intake is associated with lower grades, higher rates of absenteeism, repeating a grade, and an inability to focus among students.”

• According to the latest US Department of Agriculture figures, 3 million US households with children were food insecure in 2015—meaning that “these households were unable at times during the year to provide adequate, nutritious food for their children.”

• An initiative called the Child and Adult Care Food Program serves meals and snacks to around 3.7 million children on average each day in day care facilities, at a cost of about $3 billion annually. Note that Trump is calling for an increase in military spending of $54 billion annually, equal to 18 times that budgetary outlay.

• According to a recent report from the Centers for Disease Control and Prevention, hunger takes a toll on student achievement, and alleviating it helps.

Not content to advocate taking food out of the mouths of low-income kids, Mulvaney also took a poke at old people in need. “Meals on Wheels sounds great,” Mulvaney said during the same press conference. But he added, “We’re not going to spend [money] on programs that cannot show that they actually deliver the promises that we’ve made to people.”

Yet research from Brown University’s Kali Thomas shows that Meals on Wheels helps keep elderly people safely in their homes and out of crushingly expensive institutions, resulting in significant savings for most state governments. Her latest study, from 2015, found that “seniors living alone who received meals showed statistically significant reductions in feelings of isolation” and “felt significantly less lonely, were less worried about staying in their homes,” and “experienced fewer falls and hospitalizations.”

If Trump really intends to go after these programs, he won’t just be attacking the most vulnerable poor people. It’ll also amount to yet another attack on one of the constituencies that supported him in the election: large-scale farmers, who ultimately grow the food used in these anti-hunger programs. Trump’s immigration crackdown is already wreaking havoc on Big Ag’s labor force; and his trade policies endanger its much-needed foreign markets. By cutting food aid, he’d be messing with an important part of the domestic market, too.