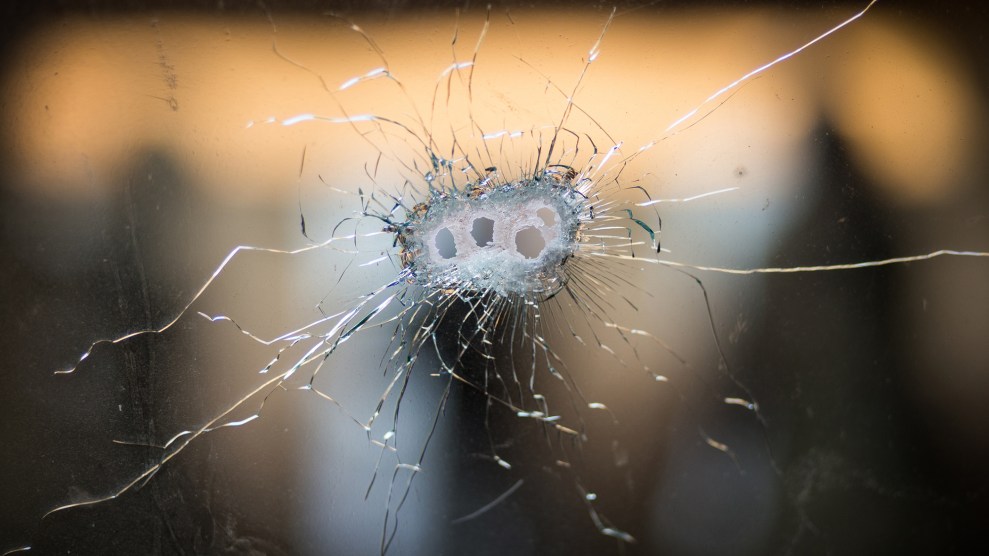 Back before the election, “when everybody thought Hillary Clinton was going to win,” Todd Rathner recalls being “deluged” with questions from people wondering about what kinds of guns they should get, where to buy them, and where to seek training. “They were buying guns because they were afraid that with a Hillary Clinton presidency there would be more restrictions on guns. Some of them thought guns would get banned,” says Rathner, a prominent Second Amendment lobbyist who has fought to expand gun rights throughout the country. But then Donald Trump won the presidency—and the urgency to stock up on firearms evaporated overnight.

The gun industry enjoyed record sales in 2016 as the “Barack boom” came to a close and a new perceived threat to gun ownership arose in the form of Clinton. Now gun sales appear to be dropping, based on the number of background checks, which are conducted when licensed firearms dealers make sales. According to the FBI, there were 520,000 fewer background checks in January than in November 2016. (As in years past, monthly checks peaked in December during the holiday season.) In February, there were almost 400,000 fewer background checks compared with a year ago. Rathner says he’s hearing less from people about which guns to buy, and more from people who work in the gun industry who say that “they’re hurting.” “There have been layoffs in the industry. People are concerned,” he says.

The pro-gun site Bearing Arms has referred to President Obama as the “World’s Greatest Gun Salesman.” The National Shooting Sports Foundation (NSSF) estimates that the gun industry has added 30,000 new jobs in the past three years. But with a gun-friendly president in the White House, the $8 billion industry has lost one of its key selling points.

According to the Washington Post, Christopher Killoy, the president and chief operating officer of Sturm, Ruger & Co., said in a recent earnings call said that semiautomatic rifles sales, which peaked before the election, have taken a major hit and “likely would’ve been in stronger demand if the election had turned out differently.” Last week, Remington laid off more than 150 employees, citing a “rapidly changing marketplace.” Rumors of massive layoffs at SilencerCo, one of the leading silencer manufacturers, began circulating last month.

Meanwhile, stocks in gun companies are trending downwards, having fallen between 17 percent and 47 percent since Election Day. Predicting the fall, short sellers have been making a mint from betting that gun stocks will continue to nosedive. “The big thing with the gun industry is that if you’re not worried the Second Amendment is going to be taken down, then you’re not in any rush to buy a gun, so their sales are going to be suffering,” says Ihor Dusaniwsky, the head of research at S3 Partners, a financial analytics firm.

“The big thing with the gun industry is that if you’re not worried the Second Amendment is going to be taken down, then you’re not in any rush to buy a gun.”

Dusaniwsky says that Sturm, Ruger has had the best performance of the three major publicly-traded gun companies. (The other two are Vista Outdoor and American Outdoor Brands, formerly known as Smith & Wesson.) Yet, as he puts it, “the tide raises all boats,” and he says that short sellers are betting that Sturm, Ruger shares will follow those of its competitors. “At the beginning of the year, we saw $219 million worth of short interests in Ruger—a $219 million bet placed that Ruger is going to go down in stock price,” he says. As of the end of last week, it was up to $300 million.

Some of this slowdown is cyclical, says Rathner, but a lot of it has to do with the election. “Donald Trump is probably the closest ally to the firearms community that has been elected president,” he says. When Trump called a special meeting of conservative leaders two weeks into his presidency, “the gun lobby was in the room.” Trump even sat beside National Rifle Association leader Wayne LaPierre, who has long warned of impending gun confiscation under Democratic administrations.

Whether the gun industry’s Trump slump will continue remains to be seen. Larry Keane, senior vice president and general counsel of the NSSF, thinks the market will soon stabilize. In an interview with the Washington Post, Keane said the gun industry is accustomed to the spikes in sales caused by political rhetoric and knew that the highs of 2016 were unsustainable. “Yes, we’re coming off the peaks in demand, but the valley floor is higher.” If the gun market is headed toward a correction, Trump’s promise to protect the Second Amendment may collide with his promise to be the “greatest jobs president that God ever created.”