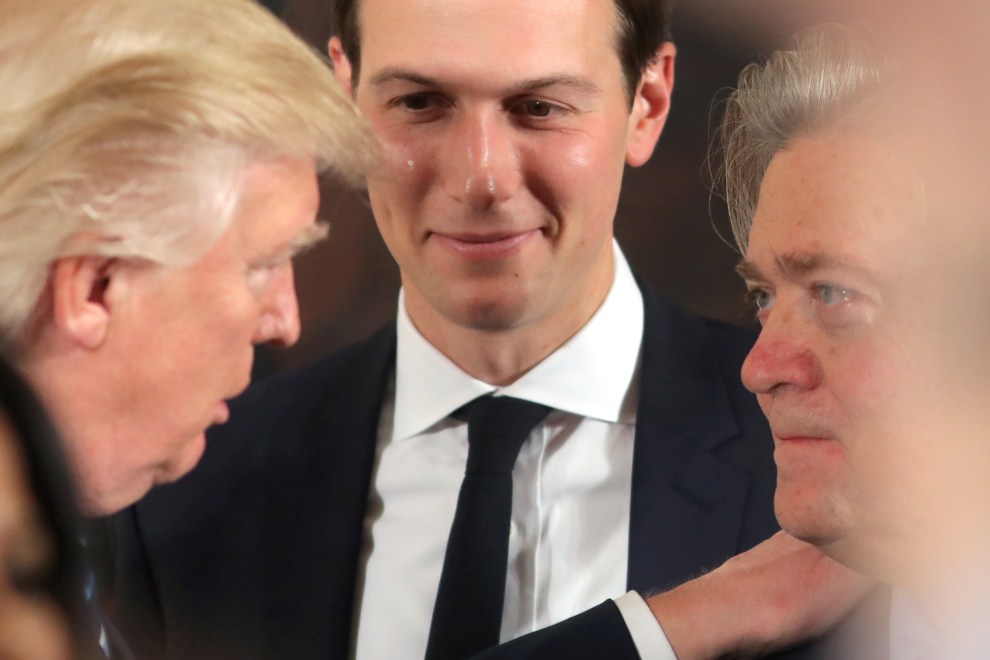 This story first appeared in ProPublica.

Jared Kushner, the president’s son-in-law and the heir to a family real estate empire, has emerged as perhaps Donald Trump’s closest adviser. A near-constant presence by Trump’s side, his portfolio includes business, tax, political, and foreign policy matters.

Last month his lawyers outlined a plan under which they said Kushner would avoid any possibility that his White House work would overlap with his business interests.

The plan didn’t have much detail. But newly released documents and statements from the White House are making the picture clearer: Kushner is keeping parts of his family business.

Kushner’s decision to keep some of his business, ethics lawyers say, raises questions about how he will recuse himself from government matters that could affect his own bank account.

Kushner Companies has also had relationships with a number of large financial firms such as Goldman Sachs that will likely be affected by Trump administration policies.

“What mechanism will the White House use to ensure that Kushner will not participate in matters that affect his retained financial interests?” asked Kathleen Clark, an ethics law expert and professor at Washington University School of Law. “We, the public, should have information about what types of matters Kushner is going to have to recuse from.”

Given the sprawling and complicated nature of the Kushner family business, the issue is not academic.

The New York Times recently explored Kushner Companies’ dealings with a Chinese firm that has ties to that country’s government. Kushner Companies has also had relationships with a number of large financial firms such as Goldman Sachs that will likely be affected by Trump administration policies.

Kushner Companies’ real estate holdings are intertwined with Fannie Mae and Freddie Mac, the mortgage finance giants that may face an overhaul during the Trump administration, as Bloomberg recently reported.

Asked about Kushner’s plan to avoid conflicts, White House spokeswoman Hope Hicks did not offer any specific areas that he will recuse himself from. She said in an email:

“Like other government employees, Mr. Kushner will recuse from particular matters that would have a direct and predictable effect on his financial interests and will comply with financial disclosure requirements.”

Here’s why recusals are needed and how they work

Kushner was hired as an executive branch employee, so he must comply with the law that makes it a crime for an official to work on a government matter that will affect his financial interests. (As president, Donald Trump is, famously, exempt from that law.)

People entering the government have two primary ways of resolving conflicts: selling off the assets that may pose a conflict, or keeping ownership and recusing themselves from government matters that could affect the holdings.

For officials like Kushner who hold onto assets, there is usually a memo outlining areas of recusal, ethics lawyers say. Sometimes there is a screening process so the official isn’t invited to, say, a meeting on a matter that would affect their holdings.

“There would likely be some written documentation of at least the overall understanding of the kinds of matters in which an individual White House official would not participate,” said ethics specialist Robert Walker of law firm Wiley Rein, speaking of the general practice, not about Kushner specifically.

For Kushner, the White House Counsel’s Office will be in charge of monitoring compliance with the conflict of interest law and, in case of any violations, making a criminal referral. High-profile prosecutions under the law are rare but not unheard of. A Bush-era Food and Drug Administration commissioner pleaded guilty in 2006 to charges stemming from his ownership of stocks in companies regulated by the agency.

Among its best-known holdings are 666 Fifth Avenue, a Manhattan office tower purchased for $1.8 billion in 2007 and the former Jehovah’s Witness Watchtower headquarters on the Brooklyn waterfront.

While the White House would only say that Kushner retains some real estate holdings, Kushner does have to file a financial disclosure form that will give more details about what he owns. The filing should be made public in the coming weeks or months. That filing may also shed light on what assets Kushner divested in the preceding year.

Kushner Companies is privately held so the full extent of the business is not clear. The company says it owns or manages 20,000 apartments and 13 million square feet of office and retail space in six states.

Among its best-known holdings are 666 Fifth Avenue, a Manhattan office tower purchased for $1.8 billion in 2007; the former Jehovah’s Witness Watchtower headquarters on the Brooklyn waterfront; and the building in midtown Manhattan that used to house The New York Times.

Kushner has divested from 666 Fifth Avenue, according to both the White House and Kushner Companies spokesman James Yolles.

Neither Yolles nor the White House would provide more details.

Kushner has also stepped down as chief executive of the family company.

The new documents, from the Office of Government Ethics, show that Kushner has sold his interest in seven entities, some of which are associated with Thrive Capital, a venture capital firm run by his brother, Joshua. (Thrive has investments in Oscar, the health insurance company.)

Last month, Kushner’s attorneys told reporters that he would divest from 35 investments. It’s not clear whether all of those divestitures have been made or what the remaining investments are.

Kushner’s attorneys said that some of those assets would be sold to Kushner’s brother and a trust controlled by his mother. That arrangement raised the eyebrows of some ethics experts, with one describing it as a “shell game.”

Under the conflict of interest law, government employees must also avoid conflicts that could arise from their spouse’s assets. Kushner’s attorneys previously said that his wife, Ivanka Trump, would divest some assets. But again the details are unclear.

Government ethics office documents show Ivanka Trump divested shares in a handful of securities. But it’s not clear if Ivanka Trump has sold other holdings, such as her stake in the Trump Organization’s hotel at the Old Post Office building in Washington, D.C. That hotel is run under a lease with the federal government, which could create another conflict for Kushner.

The Office of Government Ethics warned Kushner’s attorneys about the unpredictability of ethics issues, according to heavily redacted email exchanges, which were first reported by MSNBC.

“White House appointees are at the mercy of the attention span of a White House Counsel’s office with a thousand other things to do. As things are currently shaping up, it’s not clear that this new White House will have a fully functioning ethics office of its own on the first day. For that reason, caution is advisable. The further you can put [Kushner] back from the line, the better you will protect him.”

Derek Kravitz contributed to this report.