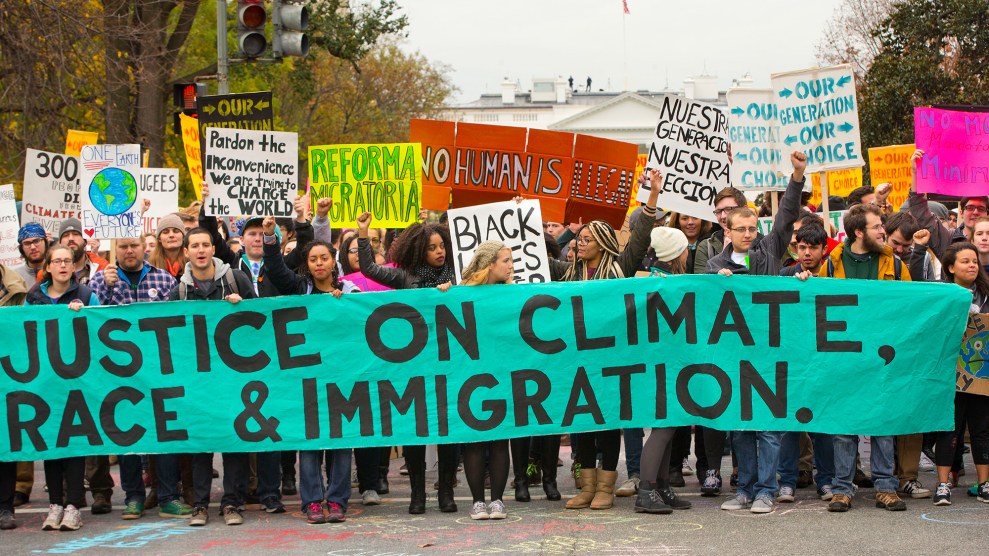 Following the election of Donald Trump, groups affiliated with the Black Lives Matter movement set out to expand their focus beyond criminal justice issues and build partnerships with outside advocacy groups. May Day will be the first big test. On May 1, International Workers’ Day, a coalition of nearly 40 advocacy groups, is holding actions across the nation related to workers’ rights, police brutality and incarceration, immigrants’ rights, environmental justice, indigenous sovereignty, and LGBT issues—and more broadly railing against a Trump agenda organizers say puts them all at risk.

“We understand that it’s going to take all of our movements in order to fight and win right now.”

This massive effort, dubbed Beyond the Moment, is led by a collective of racial-justice groups known as the Movement for Black Lives. Monday’s actions will include protests, marches, and strikes in more than 50 cities, adding to the efforts of the labor organizers who are leading the usual May Day protests.

Beyond the Moment kicked off officially on April 4, the 49th anniversary of Dr. Martin Luther King Jr.’s “Beyond Vietnam” speech. In that speech, delivered in New York City in 1967, King addressed what he saw as the connection between the war in Vietnam and the racial and economic oppression of black Americans. Both, King argued, were driven by materialism, racism, and militarization—and he called upon the era’s diverse social movements to work together to resist them. (Exactly one year later, King was assassinated in Memphis, Tennessee, where he’d traveled to meet with black sanitation workers organizing for higher wages and better conditions.)

Beyond the Moment adopted King’s tactics. Organizers intend to build a lasting coalition of marginalized groups that can be brought together for future actions. This past April 4, the Movement for Black Lives collaborated with Fight for $15, a national movement led by low-wage workers, for a series of marches, protests, and educational efforts. On Monday, they will be joined by countless other groups.

“We understand that it’s going to take all of our movements in order to fight and win right now,” said Patrisse Cullors, a co-founder of one of the Black Lives Matter groups involved. Beyond the Moment, she says, is “a reminder to this administration that you’re going to have to contend with us” over the long term. In Los Angeles, where Cullors will be on May 1, a march is planned from the city’s historic MacArthur Park to City Hall. More than 100 organizations will participate, Cullors says.

“This is a very dangerous time, and we’re taking it very seriously.”

Black Lives Matter groups have long collaborated with other groups locally, but only fairly recently have they sought to do so at the national level. Last summer, they sent organizers and supplies to assist the Native American protesters at Standing Rock. In January, in advance of Trump’s inauguration, the groups led a series of protests and educational efforts highlighting aspects of the Trump agenda that target immigrants, Muslims, and people of color.

Monday’s actions will follow a series of national marches defending the value of scientific research and evidence-based policy (a response, in part, to the administration’s efforts to gut the Environmental Protection Agency, slash federally funded research, and eliminate science advisers in government.

“We’re going to have to undo a lot of the policies that this administration is putting on us. And in four years, we don’t want another Trump. We don’t want another Jeff Sessions.” The organizers are laying the groundwork for a Trump-free world, Cullors said. “What you’re seeing is natural allies coming together to organize, to grow bigger, to get stronger, and to build power…This is a very dangerous time, and we’re taking it very seriously.”