Smoke billows following a reported airstrike by government forces in the northern Syrian city of Aleppo on November 20, 2015. Ameer Alhalbi/NurPhoto/AP

The United States fired more than 50 tomahawk cruise missiles at Syrian government targets on Thursday night in response to the Syrian government’s chemical weapons attack on civilians earlier this week, according to multiple news reports. The target of the US strike appears to be the Syrian regime airbase where the chemical attack is said to have originated.

.@NBCNews confirms more than 50 tomahawk missiles fired by US military into Syria

President Donald Trump made a televised address to the nation Thursday night from his Florida resort, Mar-a-Lago. He said that the strike was in “vital national security interest to the United States” and called on “all civilized nations to join us in seeking to end the slaughter and bloodshed in Syria and also to end terrorism of all kinds and all types.”

The Trump administration spent much of Wednesday developing potential military responses against Syria, according to multiple reports.

The chemical attack, which took place Tuesday and killed as many as 100 people, including at least 11 children, is thought to be the deadliest use of chemical weapons since August 2013, when more than 1,000 people were killed in a chemical weapon attack carried out by the regime of Bashar al-Assad on the outskirts of Damascus. At the time, President Barack Obama stated he would seek congressional authorization for the use of force against Syria. But then-Secretary of State John Kerry issued an ultimatum: Assad could turn over chemical weapons stockpiles and avoid military strikes. No congressional vote ever took place.

NBC News reported Wednesday that US military personnel saw Syrian aircraft appear on radar at the time of the latest attack, and then saw them drop bombs on civilians in Khan Sheikoun in rebel-held Idlib in northern Syria. Soon after, the US radar system detected flashes from the attack.

“It crossed a lot of lines for me,” Trump told reporters on Wednesday. “When you kill innocent children, innocent babies, babies, little babies, with a chemical gas that is so lethal people were shocked to hear what gas it was, that crosses many, many lines, beyond a red line.”

But in previous days, the Trump administration signaled multiple times that removing Assad from power was no longer a long-term priority. On Monday, Nikki Haley, the American ambassador to the United Nations, stated, “Our priority is no longer to sit there and focus on getting Assad out. We can’t necessarily focus on Assad the way that the previous administration did.” 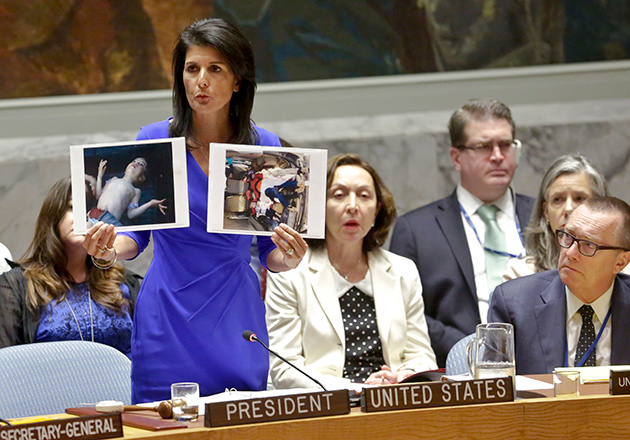 Nikki Haley, the US ambassador to the UN, shows pictures of Syrian victims of chemical attacks at a Security Council meeting on Wednesday. Bebeto Matthews/AP

Late last week, Secretary of State Rex Tillerson said that Assad’s future “will be decided by the Syrian people,” which, as The Daily Beast puts it, is “a euphemism used by Damascus, Moscow, and Tehran to indicate that he isn’t going anywhere.”

ISIS isn’t located in the area where the chemical weapons fell this week.