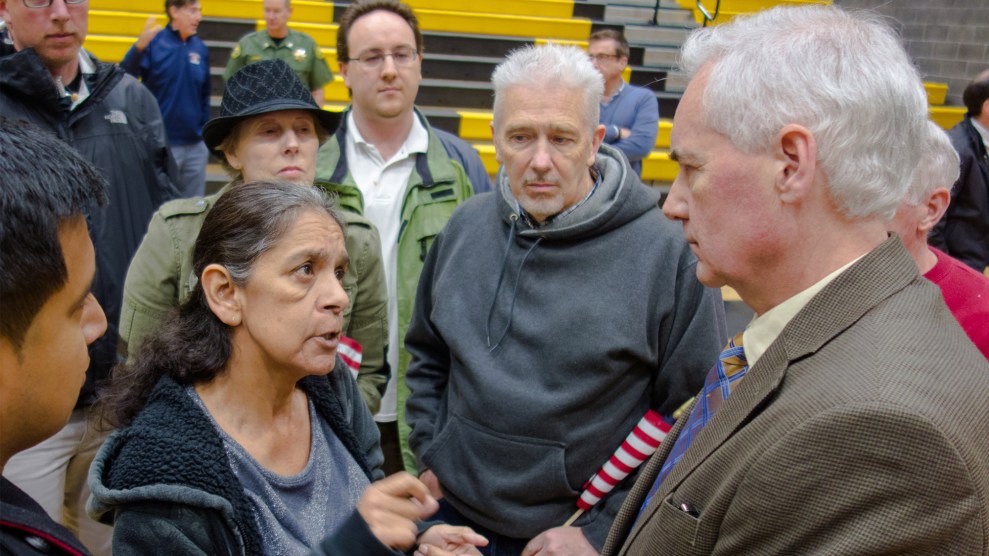 When Rep. Tom McClintock (R-Calif.) walked into the gymnasium of Del Oro High School in Loomis, California, on Saturday morning, he was greeted by 750 angry people. For the next two hours, the Northern California Republican endured questions, shouts, and jeers from constituents who fiercely disagreed with his support for President Donald Trump’s policies, and his comments did little to satisfy the crowd’s concerns.

McClintock’s reluctance to change his mind wasn’t surprising. California’s 4th Congressional District, which McClintock has represented for more than eight years, represents a stark contrast to the image of California as a coastal liberal bohemia. Splayed across the eastern edges of the San Joaquin and Sacramento river valleys and the Sierra Nevada Mountains, McClintock’s district is largely rural. It decisively voted for Trump (54 percent to Clinton’s 39 percent) in the 2016 election, one of just seven California districts to do so. In the same election, McClintock beat his Democratic competitor by nearly a 2-to-1 margin.

Yet witnessing the crowd packed into the expansive gymnasium at the Saturday town hall, it was hard to tell that this district is so deeply red. Attendees lining the bleachers raised signs with slogans like “Build Bridges, Not Walls,” “We ♥ Dreamers In CA,” and “Dump Tom McTrump.” In the minutes before the town hall began, organizers from the nascent Indivisible movement lead the the crowd in song. They started with jabs at the congressman, like “Donald had a little lamb…whose name was Tom McClintock,” and gradually worked toward “This Land Is Your Land” and “America the Beautiful.”

Though people of all colors and ages were in attendance, the pussy-hatted crowd skewed toward a more senior, whiter demographic. Women outnumbered men by a noticeable margin. 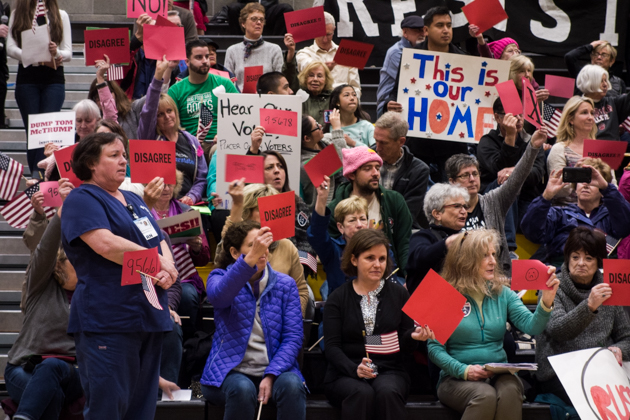 As an incumbent in a safely red district, McClintock, played his role well, seldom deviating from the party line. In the only moment where he seemed to be in agreement with the raucous crowd, he said he disagreed with Trump’s recent Syria strike. But his platitudes on the ills of government regulation and curt answers frustrated the crowd. At one point, as McClintock began answering a question with a response he’d already given a few minutes earlier, the audience issued a collective “Blah, blah, blah, blah, blah.”

When a black teenager earnestly asked him how he would preserve her safety and dignity in the face of Trump’s misogyny, McClintock coldly acknowledged that “the president has said some unsettling things about women,” before indicating he had no more to say. “That’s it?” many in the room shouted. The next questioner asked McClintock, “Are you aware that you don’t answer our questions?”

Tomás Evangelista, a Latino man in his late 20s, explained his precarious position as an undocumented person brought to the United States as a young child and asked McClintock for help. McClintock responded by saying that he was aware of “the plight of Dreamers” and “children brought here against their will,” but that their concerns will only be addressed after the southern border is “secure.” Evangelista later told me that McClintock’s position amounts to, essentially, “leave the country, and try to reenter legally.”

“He’s heartless. It’s his job to fix the law if it’s not working. If we just stuck with the original laws of our country, we would still have slavery, women wouldn’t be able to vote,” Evangelista said. “We’ve stopped asking him to change his mind, because it’s clear he is not going to. Now, we’re going to the American voters to try and deport him from the 4th District.”

“I can just repeat the same answer that I have already given to the same question over and over again,” said the frustrated congressman.

Indivisible, a national grassroots movement focused on opposing the Trump administration, had publicized the town hall. Paul Smith of Rocklin, one of the de facto leaders of Indivisible in the 4th District, said the local chapter’s goal is to educate voters about where McClintock stands. “The only reason that guy gets reelected is because people don’t pay attention, and we’re in a Republican district,” Smith said. “Our job between now and 2018 is straight education. We’re going to say, ‘Here are the things he’s said. Here are the things he’s voted on,’ and get people to really understand who the guy that represents them in Congress is.”

Shortly after the town hall concluded, Evangelista and a group of other Dreamers approached McClintock for another try at persuading him to change his mind about immigration. “I understand that you want to fix the immigration system, but fixing it by what you’re saying would mean deporting dreamers like Doris [another woman present] and I, who have lived here longer in this district than you have,” Evangelista told the congressman.

“I want to be very clear,” McClintock responded. “I do not want to see anything done that would encourage more of this. Once we have the border secured, once those illegals that are under deportation orders are out of the country, then I think we can have this discussion over what needs be done.” He continued, “You understand that if we do that without our border being secured, we’re going to encourage more people to do the same thing. That’s the basic problem.”

The group continued pleading their case to the increasingly frustrated congressman. “I can just repeat the same answer that I have already given to the same question over and over again,” McClintock said.

After that, the congressman started to leave, trailed by a small group of people gently singing “This Land Is Your Land.” Joined by his staff, McClintock quickly walked toward the gymnasium exit. His frustrated demeanor did not change as he walked outside. The afternoon was rainy, and the congressman didn’t have an umbrella.