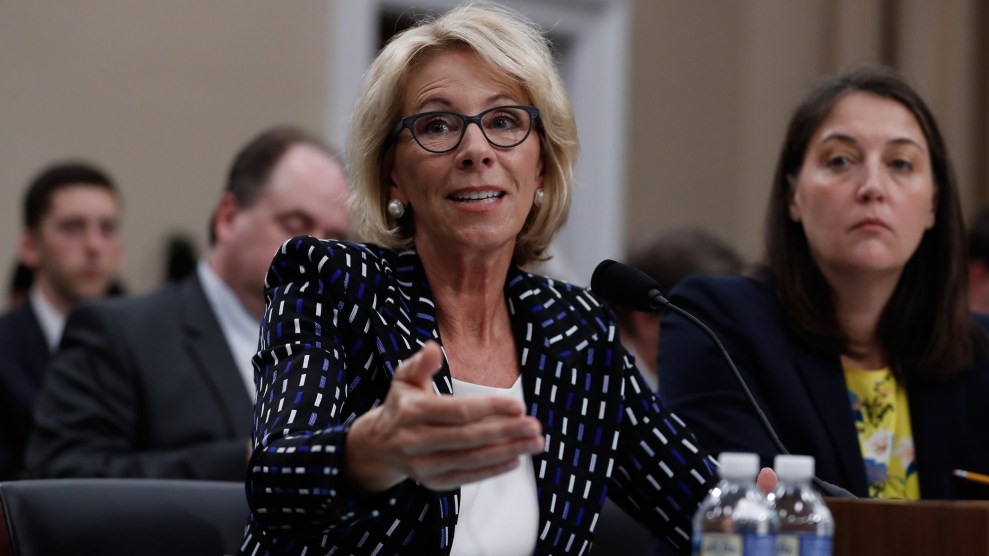 In her first appearance before Congress since her contentious confirmation hearing in January, Education Secretary Betsy DeVos refused to say whether she would step in to withhold federal funding from private schools that discriminate against LGBT students.

Speaking before the House appropriations subcommittee Wednesday to defend the administration’s proposal to cut $10.6 billion from the education department’s budget, DeVos pushed her familiar school choice message, arguing that states should be left to create their own voucher programs and that parents should be able to pick schools that can best serve their children.

But she quickly faced pushback from the subcommittee’s Democratic members. Rep. Katharine Clark (D-Mass.) asked DeVos if she could think of a “situation of discrimination or exclusion that, if a state approved it for its voucher program, that you would step in and say, ‘That’s not how we’re going to use our federal dollars’?” Clark pointed to Indiana’s Lighthouse Christian Academy, where students could be denied admission if they come from homes that violate biblical lifestyle standards—anything from “homosexual or bisexual activity” to “practicing alternate gender identity.”

“We have to do something different than continuing a top-down, one-size-fits-all approach,” DeVos responded. “States and local communities are best equipped to make decisions and framework on behalf of their students.”

Later, Rep. Barbara Lee (D-Calif.) said it was “appalling and sad” that the federal government would step away from its responsibility to protect students from discrimination. DeVos clarified that the education department would continue to investigate allegations of discrimination, despite the proposed $1.7 million cut to the department’s Office of Civil Rights. “I want to be very clear: I am not in any way suggesting that students should not be protected and should not be in the safe and secure and nurturing learning environment,” she said.

Watch the full exchange below: