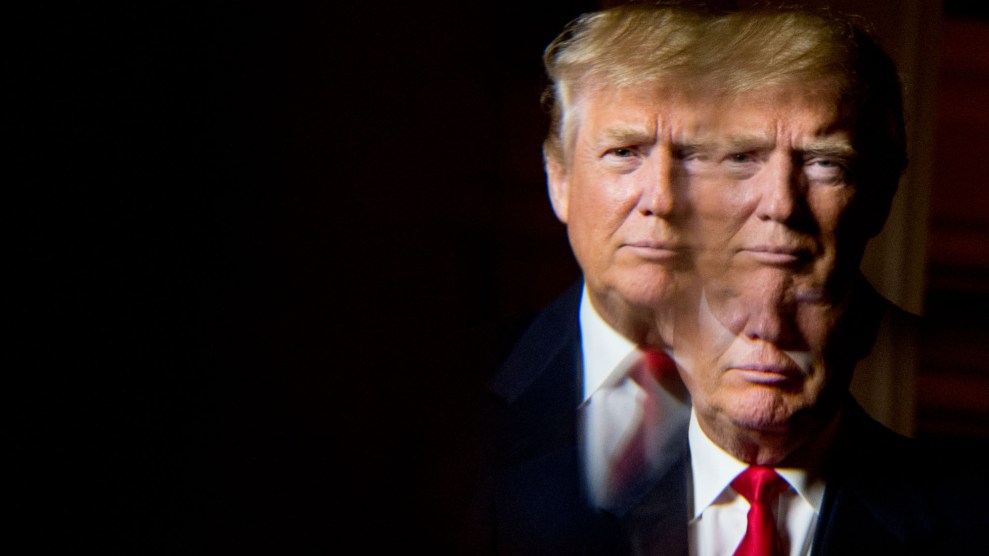 Donald Trump won’t stop claiming that the Russia story is fake news and a hoax cooked up by Democratic sore losers. And to back up his claim he (and his White House crew) keep citing former Director of National Intelligence James Clapper. Yet on Friday, Clapper essentially said that the president has been brazenly misrepresenting his words and that he was no defense witness for Trump.

This is how this whole thing began. On March 5, Clapper appeared on Meet the Press, and host Chuck Todd asked if there were any evidence of collusion between Trump associates and the Russians. “Not to my knowledge,” Clapper replied. Trump and his lieutenants seized on this answer, as if it proved there was nothing to the Russia story. On March 20, Trump  tweeted, “James Clapper and others stated that there is no evidence Potus colluded with Russia. The story is FAKE NEWS and everyone knows it!” White House press secretary Sean Spicer repeatedly deployed this Clapper statement to back up his assertion there was no collusion.

They were investing far too much in this one quote. At a Senate hearing on Monday, Clapper killed this favorite White House talking point. Asked about his exchange with Todd, Clapper noted that it was standard policy for the FBI not to share with him details about ongoing counterintelligence investigations. He explained that he had not been aware of the FBI’s investigation of contacts between Trump associates and Russia (which FBI Director James Comey revealed at a House Intelligence Committee hearing two weeks after Clapper’s Meet the Press appearance). Clapper pointed out that when he told Todd that he was not familiar with any evidence of Trump-Russia collusion, he was speaking accurately. But he made clear that he was not in a position to know one way or the other at that time.

Clapper’s testimony should have buried this piece of spin. But that didn’t happen. Trump wouldn’t let go. That night, hours after Clapper’s testimony, Trump tweeted, “Director reiterated what everybody, including the fake media already knows-there is ‘no evidence’ of collusion w/ Russia and Trump.”

Director Clapper reiterated what everybody, including the fake media already knows- there is “no evidence” of collusion w/ Russia and Trump.

This was literally a black-is-white tweet. Completely false. And for a while, it was part of the banner at the top of Trump’s Twitter feed. Then on Friday morning, in the middle of a tweet storm, Trump posted this missive, “When James Clapper himself, and virtually everyone else with knowledge of the witch hunt, says there is no collusion, when does it end?”

When James Clapper himself, and virtually everyone else with knowledge of the witch hunt, says there is no collusion, when does it end?

So Clapper had to be called back to duty to shoot down the president’s lie. On Friday afternoon, he appeared on Andrea Mitchell’s MSNBC show. Out of the gate, she asked him about this tweet and Trump’s use of Clapper as cover.

Clapper was clearly not comfortable dinging he president, but he again explained that he often was not informed—purposefully—of the FBI’s sensitive counterintelligence work. Referring to the FBI’s probe of interactions between Trump associates and Russians, Clapper said, “It’s not surprising or abnormal that I would have not known about that investigation…or the content of this investigation.” He spelled it out: “I don’t know if there was collusion or not…Nor should I have.” He added that there was no evidence of collusion that rose to the level of “high confidence” when the intelligence community in January was preparing its assessment of the Russian meddling in the 2016 campaign. Yet he added, “That’s not to say there wasn’t evidence.”

Mitchell also asked Clapper to comment on Trump’s assertion that the Russia story is a fraud.

“I don’t believe it is,” he said, adding that this scandal is “dark cloud” hanging over Trump’s presidency. Clapper also praised James Comey, the FBI director Trump canned in part due to the Russia investigation. And Clapper challenged the White House line that morale at the FBI was low because of Comey: “I can attest personally to the very high esteem and respect the people in the FBI had and still have for Jim Comey.”

So will Trump get the message and cease citing Clapper as he tries to depict the Trump-Russia scandal as nothing but a scam orchestrated by his political enemies? That’s anyone’s guess. As for Clapper, he remarked that Russian interference in the 2016 election is “the issue we ought to be focusing on.”