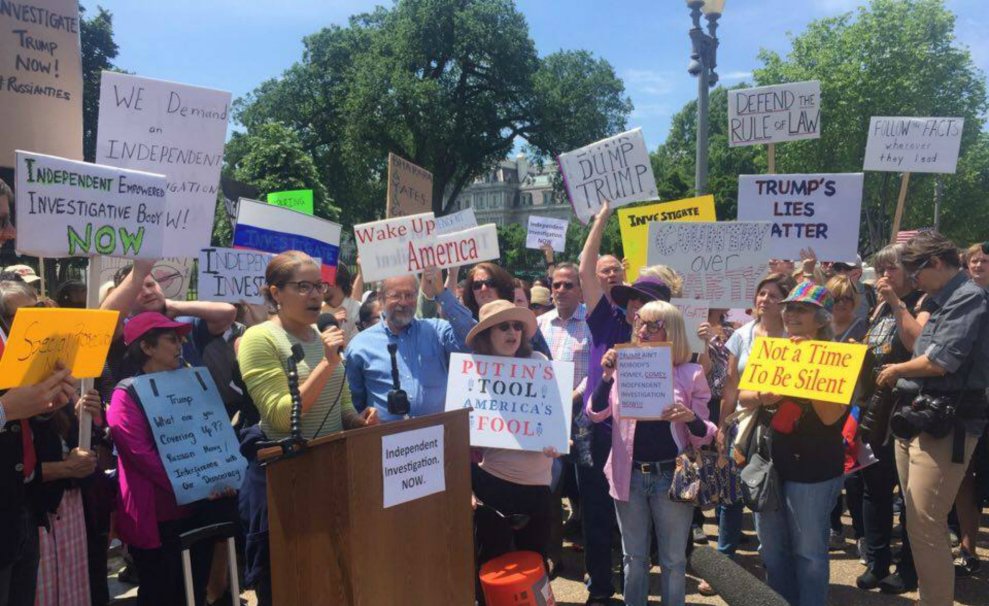 Several hundred people showed up at a hastily organized protest outside the White House Wednesday in the wake of the firing of FBI Director James Comey. Their demand: an independent commission or special prosecutor to investigate Russian interference in the 2016 election and possible collusion with Trump campaign associates.

“I just had to come over at my lunch break and voice my concerns,” Michelle Cochran, who works in health care, told Mother Jones. “As horrible as our president is, I’m so upset and furious at all the Republicans in power who aren’t doing their job, and that’s where my fury is.”

Protesters shout SHAME after organizer says they can be heard from the White House briefing room. @MotherJones pic.twitter.com/3YwqyEsmO0

MoveOn.org Washington director Ben Wickler said that Comey’s termination had escalated concern over the Russia scandal to new levels. “The firing of James Comey put us on totally different footing,” he said. “This is now a constitutional crisis. The fundamental rule of law in this country is at stake. That’s why we’re hearing Republicans…actually expressing their concerns.”

The protest even got a little support from establishment Democrats, with Democratic National Committee chairman Tom Perez showing up to speak. “We have a strong message for Republicans in Congress: Wake up and smell the cover-up,” he told the crowd. “We are a nation where, as Jeff Sessions once said, nobody is above the law.”

While officially the group was there to demand an independent investigation, some speakers at the protest were calling for more. “We are beyond a special prosecutor in my view, we need the president to resign immediately,” Ianta Summers, an organizer for the Women’s March on Washington, told the crowd. “We cannot wait until 2018 to take this man out of office. He needs to go, now.”

“We cannot wait until 2018…he needs to go now.” pic.twitter.com/LtztrIxtDm

Organizers say the protests are just getting started and the pressure will continue until an independent investigation is underway. MoveOn.org is organizing protests tonight at senators’ offices in their home states tonight, where calls for a thorough investigation into the Russia scandal will only grow louder—protesters are being encouraged to bring pots and pans.