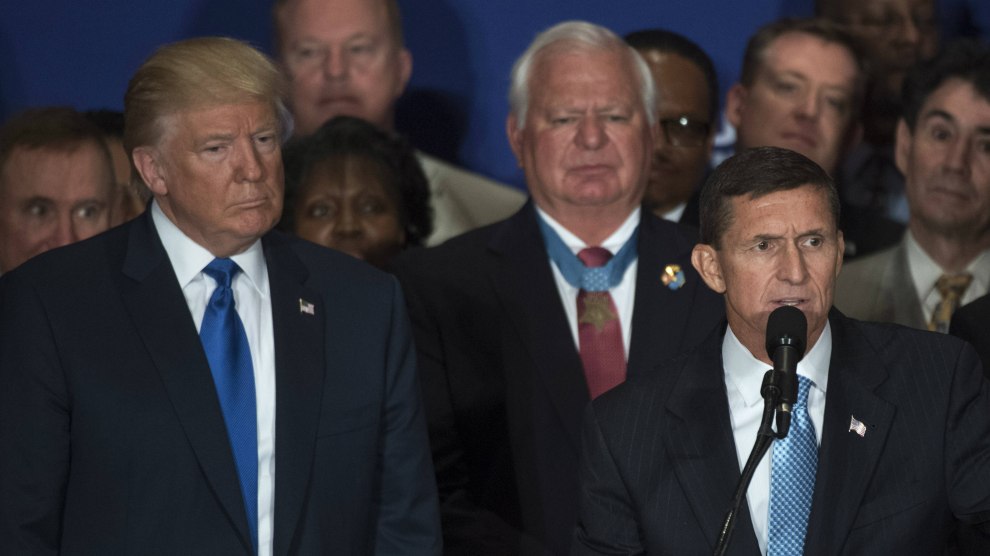 Ekim Alptekin, a well-connected Turkish businessman at the center of one of the many scandals swirling around President Donald Trump and his White House, stood before a crowd of several hundred people in downtown Washington and sought to clear up a few things. “There’s been a lot of media attention on it,” he later told a reporter, “so I just wanted to address the issue.”

The “issue” in question was no small matter. Last year, Alptekin paid $530,000 to retired Lt. General Michael Flynn to lobby on behalf of Turkish interests. At the time, Flynn was a top adviser to Trump’s presidential campaign, and after Trump’s shock victory, the president-elect rewarded Flynn with the job of national security adviser. But it later emerged that Flynn had failed to register as a foreign lobbyist for this work, as required by law, and that he was under federal investigation for his secret lobbying for Alptekin. (Flynn was fired in February, after only 22 days on the job, amid reports that he had communicated with the Russian ambassador and lied about it.)

So it was a bit awkward when Alptekin appeared in Washington this week for the 36th Annual Conference on US-Turkey Relations. (He chairs one of the conference’s two main organizers, the Turkey-US Business Council.) In a speech on Monday, Alptekin addressed the Flynn controversy directly. “As many of you have read in the media,” he said, “I hired the Flynn Intel Group in 2016 before the election with a mandate to help me understand where the Turkish-American relationship is and where it’s going and what the obstacles are to the relationship.” His willingness to confront such a thorny issue—legally and politically—caught some in attendance by surprise. Yet there was also a surreal quality to Alptekin’s remarks, if only for this reason: He delivered them at the Trump International Hotel, owned by the president himself.

International intrigue notwithstanding, the 36th Annual Conference on US-Turkey Relations was typical of the glitzy conventions and forums hosted in Washington. There were panels on e-commerce, NATO, and cybersecurity, all with the theme of encouraging greater cooperation between the governments and industries of the United States and Turkey. Newt Gingrich, the former House speaker and now a Zelig of Washington’s paid-speaking and overseas-junket circuit, spoke at a luncheon sponsored by several major Turkish conglomerates, where he poked fun at the president and plugged his forthcoming book, Understanding Trump.

For his part, Alptekin pointed out that the venue had been chosen well before Trump was elected president. In October 2016, the American-Turkish Council, a group devoted to building up business connections between the two countries (and the conference’s other organizer), booked the Trump hotel in downtown DC, a short walk from the White House. According to Alptekin, the Turkish interest groups had first toured the hotel even earlier, in 2015, before Trump had declared his candidacy. Howard Beasey, president of the American-Turkish Council, told NPR, “Unfortunately, in our contract with the hotel, there is no I-became-president-so-you-get-to-break-your-contract-with-us clause.”

And so it was that Alptekin, whose hiring of Flynn helped plunge the Trump White House into turmoil, spent several days this week roaming the marble lobbies and conference rooms of Trump’s DC hotel. He schmoozed with attendees, posed for photos, and sat for interviews with largely international news outlets, all the while surrounded by the name TRUMP.

Aside from his opening remarks, however, Alptekin had little to say about Flynn. He denied to ABC News that he and his company had represented the government of Turkey. (In his retroactive filing, Flynn noted that his work for Alptekin “could be construed to have principally benefitted the Republic of Turkey.”) Alptekin blamed the “highly politicized situation” in the United States for the “misunderstanding and misperceptions” around his company and hiring of Flynn.

There are many lingering questions about Alptekin’s role in the Flynn controversy: Why did Alptekin hire Flynn in the first place? Did Flynn tell Alptekin he wasn’t going to register as a foreign lobbyist? Had Alptekin ever spoken with Trump himself? If Alptekin were subpoenaed by Congress or law enforcement as part of the Flynn investigation, would he cooperate and provide documents? Alptekin addressed none of these. He refused to comment to ABC News when asked whether he had been questioned or served a subpoena as part of the Flynn investigation.

In the main lobby of the Trump hotel, I tracked down an assistant of Alptekin’s and asked for an interview. She said Alptekin was no longer giving interviews. At that moment, Alptekin stood a few feet away, speaking on camera with a small TV crew. After he finished, he and his entourage sped past me in the direction of the hotel’s ballrooms, presumably to rejoin the guests for a final panel on Turkey’s shipbuilding industry.

So it goes in Donald Trump’s Washington.