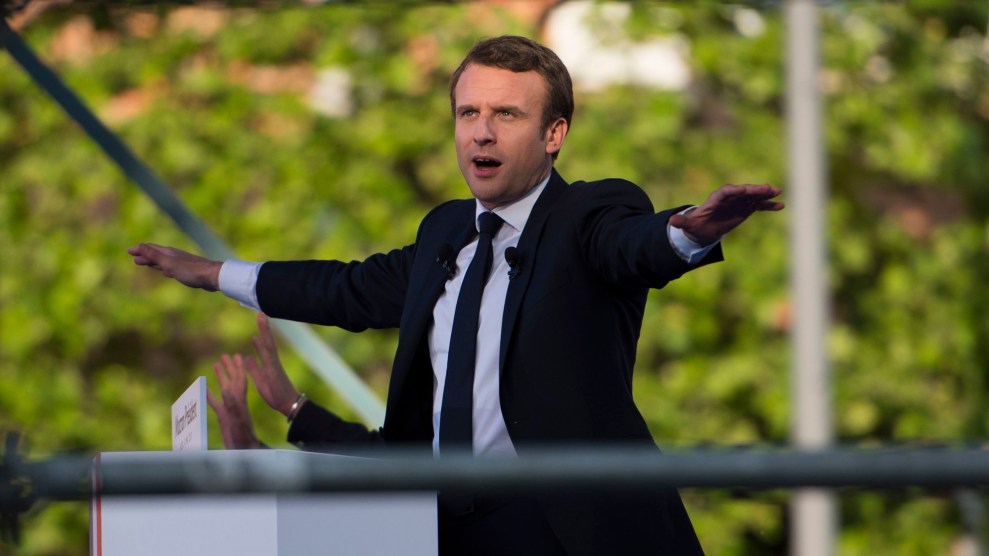 A massive trove of documents purporting to contain thousands of emails and other files from the campaign of Emmanuel Macron—the French centrist candidate squaring off against right-wing nationalist Marine Le Pen—was posted on the internet Friday afternoon. The Macron campaign says that at least some of the documents are fake. The document dump came just over a day before voting is set to begin in the final round of the election and mere hours before candidates are legally required to stop campaigning.

At about 2:35 p.m. ET, a post appeared on the 4chan online message board announcing the leak. The documents appear to include emails, internal memos, and screenshots of purported banking records.

“This operation is obviously a democratic destabilization as was seen in the United States during the last presidential campaign,” the Macron campaign said.

“In this pastebin are links to torrents of emails between Macron, his team and other officials, politicians as well as original documents and photos,” the anonymous 4chan poster wrote. “This was passed on to me today so now I am giving it to you, the people. The leak is massvie and released in the hopes that the human search engine here will be able to start sifting through the contents and figure out exactly what we have here.”

The Macron campaign issued a statement Friday night saying it was the victim of a “massive and coordinated” hacking attack. That campaign said the leak included some fake documents that were intended “to sow doubt and misinformation.”

The Macron camp compared the document dump to last year’s hacking of emails associated with Hillary Clinton. The US intelligence community has concluded that Russia was responsible for the Clinton hacks. “This operation is obviously a democratic destabilization as was seen in the United States during the last presidential campaign,” the Macron statement said.

The timing of the leak is particularly noteworthy. Under French law, candidates and their campaigns cannot speak to the media or do anything in public in the 24 hours before the start of Sunday’s election. The Macron campaign’s statement was issued three minutes before the deadline.

It’s unclear when the files originally appeared on the internet. The official Twitter account for WikiLeaks—the group that released the Clinton emails last year—tweeted a link to a page where the Macron data was hosted at 1:13 p.m. ET.

Alleged multi-GB team Macron email archives. Could be a 4chan practical joke. We are examining https://t.co/wLemQiYHT2

“Fully analyzing the hacked documents to verify that they are genuine will take some time, but from what I’ve seen so far, it looks very serious,” said Matt Tait, a former information security specialist for the GCHQ (the United Kingdom’s equivalent of the National Security Agency) and CEO of Capital Alpha Security.

In February, Macron said he had evidence his campaign had “suffered repeated and multiple attacks from hackers” and that “many come from Ukraine.” At the time, the Macron campaign blamed the Russian government for the attacks, a claim the Kremlin denied. The campaign suspected the attacks were coming their way because of Macron’s tough stance on Russia. Le Pen, on the other hand, has taken a much more favorable stance toward Russia.

Earlier on Friday, according to the New York Times, the Le Pen campaign claimed in a statement that its campaign website had been the victim of “regular and targeted” attacks, and that a hacker “close to extreme-left circles” had been arrested.