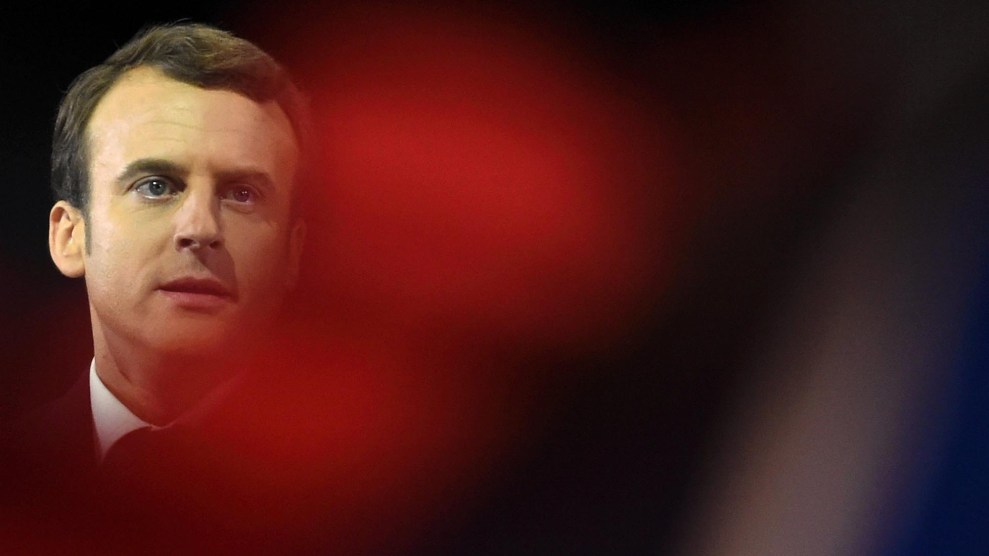 French voters on Sunday elected Emmanuel Macron—a 39-year-old centrist, pro-European Union, pro-NATO political newcomer—as the nation’s next president. Macron’s victory has been hailed as a major setback for the wave of far-right populism spreading through Europe. But the challenges facing France’s new leader are immense: He and the party he created from scratch barely a year ago will now try to stock the country’s legislature with enough allies to move his agenda forward.

Macron has just a month to prepare for the next electoral fight; French voters will go back to the polls for parliamentary elections in early June (with a second round on June 18). Marine Le Pen, the right-wing nationalist who has called for pulling France out of the European Union and NATO, may have been routed in Sunday’s presidential election, but she’s already begun rallying her millions of supporters in a bid to win large numbers of legislative seats. Jean-Luc Melenchon—the left-wing populist who some have compared to Sen. Bernie Sanders—has called on his supporters to work against Macron’s agenda. And Macron’s own party, En Marche, “has never fielded a single candidate in any election, local or national,” the Guradian notes.

“I understand the anger that many of you have expressed,” Macron told supporters.

Polling suggests that En Marche and another centrist party, Modem, are currently the choice of a narrow plurality—26 percent—of French voters, while Le Pen’s party, the National Front, comes in at 22 percent. The Union of Democrats and Independents, a center-right party, is polling at about the same level as the National Front, followed by France Unbowed—Melenchon’s party—at 13 percent. The Socialist Party, which currently dominates the parliament, is at 8 percent.

Despite his overwhelming victory Sunday, a quarter of the French electorate didn’t vote, another potentially troubling sign for Macron.

“The turnout was very low,” Douglas Webber, a professor of economics and political science at INSEAD’s French campus, told CNBC. “Twenty-five percent of French citizens abstained,” he said. “On top of that, around 8 percent cast invalid votes as an indication of their dissatisfaction with both of the candidates in the second round. So [Macron] now has the tough challenge ahead of him of trying to win a majority in the parliamentary elections in the middle of June, and it’s by no means sure he will manage this.”

Macron ran from outside of the political establishment, but his policy proposals are centrist and, at times, appeared designed to appeal to everyone all at once. He’s proposed slashing payroll taxes, but not increasing the hours in the work week, for instance. “Everyone will ask if it’s a program of the left or of the right,” he said during the campaign. “I want it to be a program that brings France into the 21st century. It’s essential to liberate sectors of our economy, but at the same time to provide protections for all.”

His detractors from the left and right see him as too connected to big finance and banking—he’s a former investment banker—so he has his work cut out for him.

“I understand the anger that many of you have expressed,” Macron told supporters after his win Sunday. “It is my responsibility to hear you. I will fight with all my strength against the divisions that undermine us.”

Le Pen may have lost, but she’s proving that her party and, more importantly, her message of reduced immigration and more nationalistic and France-first policies, are popular with millions of French voters. She earned more than 10.5 million votes on Sunday, roughly double the number of votes her father won running for the same party in 2002. Le Pen’s campaign advisers say the National Front is now the “primary opposition party in the country.”

Still, Le Pen said Sunday that her party “must deeply renew itself” and proposed a “deep transformation of our movement in order to make a new political force.” It’s unclear what that means, but her party’s interim president told reporters that the party would re-name itself and attempt to build on the momentum created during the presidential election.

Trying to bring more people into her party will be key, and Le Pen is looking for “those who choose France, defend its independence, its freedom, its prosperity, its security, its identity, and its social model,” she said Sunday. “I will be at the head of this combat.”