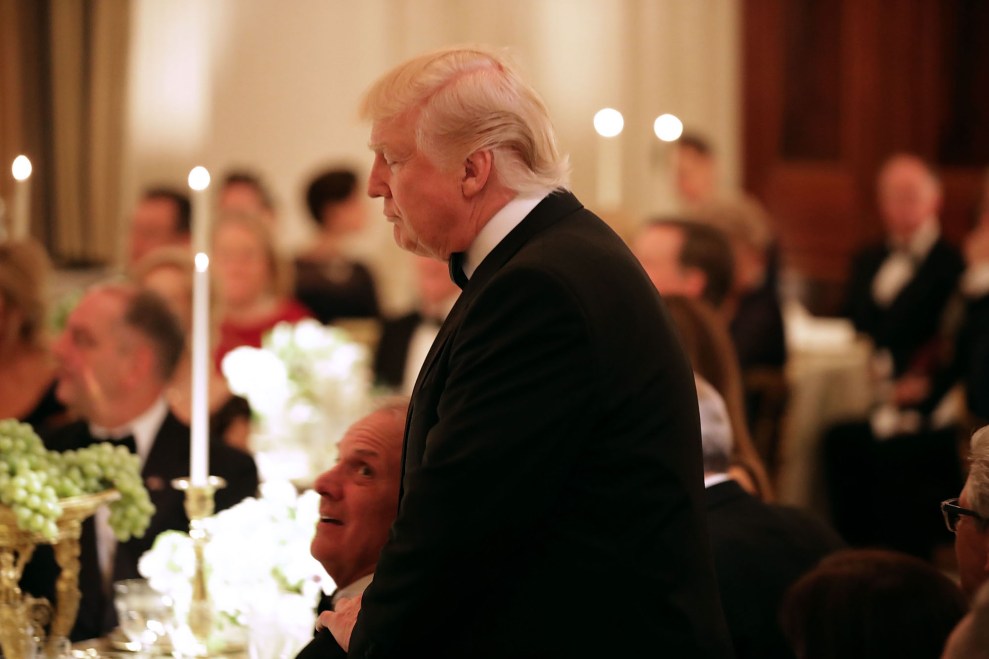 As President Donald Trump prepares to embark Friday on his first overseas trip since taking office, several reports have emerged detailing how international leaders are planning to welcome Trump—a notorious homebody who has demonstrated a preference for the familiar comforts of his hotel and golf properties during his short time in office. The president is said to be dreading the nine-day tour, which will include stops in Saudi Arabia, Israel, the Vatican, Belgium, and Italy.

Trump’s hosts have been paying close attention to his quirks and are planning to accommodate him accordingly:

It’s no secret the November presidential election is still at the forefront of Trump’s mind. When Reuters reporters sat down for an interview with the president in April, Trump interrupted a conversation about Chinese President Xi Jinping to hand out copies of what he claimed to be the newest numbers of the Electoral College. “That’s the final map of the numbers,” he said. “It’s pretty good, right? The red is obviously us.”

Clearly, the world has also noticed Trump’s obsession. The New York Times reports foreign officials are encouraging anyone scheduled to meet with Trump to occasionally drop praise of his Electoral College results.

The same Times story reports foreign officials have been recommended to slip in lines that appear to boost Trump’s morale, while dinging his predecessor, former President Barack Obama. During Trump’s young tenure in the White House, Obama has maintained the position as a frequent target of the president’s Twitter rants.

According to the Associated Press, Saudi Arabia has taken note of Trump’s eating habits and will be serving him his favorite dish, well-done steak with a side of ketchup, during a state dinner.

Keep expectations at a minimum:

Earlier this week, the White House announced that the president will be giving a speech on Islam during his visit to Saudi Arabia. The speech is being written by controversial White House aide Stephen Miller, who has a history of expressing extreme, anti-Muslim ideas and was a key figure in writing the administration’s Muslim ban. But according to an anonymous US diplomat stationed in the Middle East, regardless of the speech’s content, Muslim leaders aren’t likely to take anything Trump says seriously. Why? “Not many people give much weight to anything he says,” the source told Buzzfeed. A scholar at the Century Foundation went further and said that the “bar is so low Trump will be seen as a success simply by avoiding the outlandish.”