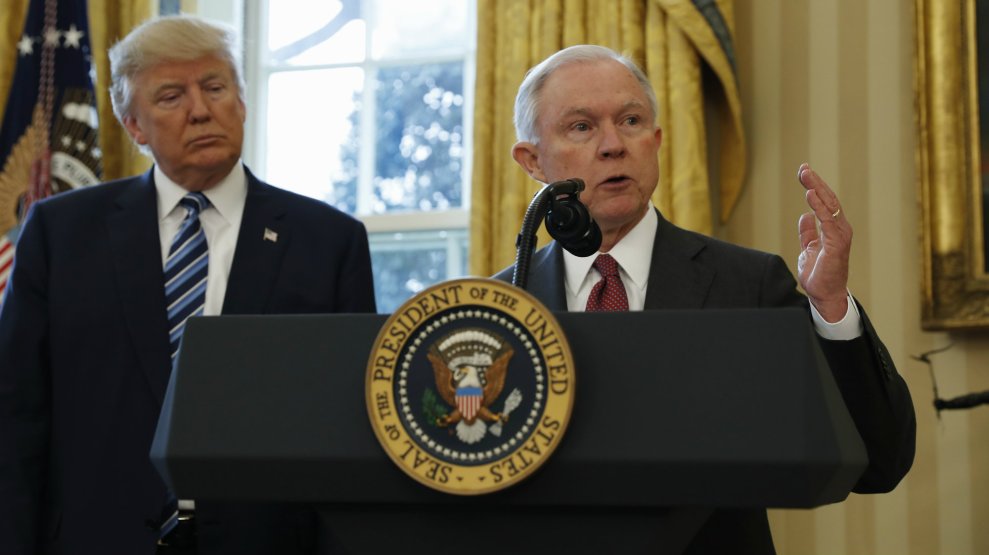 Attorney General Jeff Sessions in a Department of Justice memo on May 12 reversed Obama-era guidelines for how to deal with drug offenders, directing federal prosecutors to charge defendants with the “most serious, readily provable” offense in nearly all cases. Sessions said in a speech that day that the new guidelines “un-handcuffed” prosecutors in their law enforcement efforts and is “the right and moral thing to do.” His announcement has far-reaching implications for how federal prosecutors across the country approach drug offenses during Trump’s administration.

Criminal justice reform advocates—including former Attorney General Eric Holder, who put the earlier guidelines in place—and some members of Congress swiftly criticized Sessions’ policy shift. “The Sessions memo is like traveling back in time to the 1980s,” Bruce Western, a professor of criminal justice policy at Harvard University, said. “From the chief law enforcement officer in the country, you’ve got an endorsement of tough-on-crime criminal justice policy.”

Holder had hoped to reign in the use of harsh federal sentencing laws, and back in 2013, he sent a series of reform-minded memos to federal prosecutors. He instructed them not to charge certain offenders, like low-level or first-time drug dealers, with anything that would trigger a mandatory minimum sentence, which can require prison terms as long as 10 years or more for the possession of relatively small amounts of drugs. The results were immediate. The number of federal inmates sentenced to a mandatory minimum on a drug charge dropped in 2014 and has declined nearly 40 percent since. The federal prison population also shrunk that year for the first time in almost 35 years, due partly to Holder’s policy changes and other Obama administration efforts. Bipartisan support for shifting away from mandatory minimums has grown in recent years, as research has shown that incarceration does little to improve public safety and has had a disparate impact on communities of color—and as lawmakers have decided that running prisons costs too much.

Sen. Rand Paul said mandatory minimums have a racially disparate impact, and that Sessions’ policy shift would “accentuate” that “injustice.”

On Tuesday, in response to Sessions’ policy announcement, Republican Sen. Rand Paul and Democratic Sen. Patrick Leahy proposed legislation more in line with Holder’s approach: It would allow judges to tailor sentences on a case-by-case basis, regardless of whether a mandatory minimum sentence applies. Paul said these minimums have a racially disparate impact, and that Sessions’ policy shift would “accentuate” that “injustice.” He also said his bill would save the DOJ money—the department currently spends nearly a third of its budget on corrections. A group of House members plan to introduce similar legislation.

A key problem with mandatory minimums is that they limit judges’ ability to decide what sentence is appropriate, says Mark Kleiman, an expert on crime deterrence at New York University. In April, a federal judge in Tennessee resigned in protest over a life sentence he was forced to impose on a 28-year-old drug dealer for a nonviolent offense. “If there was any way I could have not given him life in prison I would have done it,” the judge told a local newspaper. Other federal judges have ruled that the sentences are unconstitutional and have refused to abide by them, but their rulings were overturned on appeal. Of the three factors that influence crime deterrence—the certainty of the punishment, the speed with which it’s imposed, and the severity of the sentence—severity is least important, according to Kleiman, “partly because the last five years of a 20-year sentence start 15 years from now,” and most criminals likely don’t plan that far ahead.

Sessions’ charging memo revived another trick used by federal prosecutors that Holder sought to curb. It rescinded an instruction that prosecutors not charge offenders with sentencing enhancements—or add-on charges that can significantly increase the length of their sentence—in order to coerce cooperation. Prosecutors often charged defendants with enhancements in order to force them to plead guilty to another charge or to coerce them to give up information or testify against someone in court.

“It’s a very small minority that think the length or the kind of sentences that can get meted out under federal drug laws are appropriate. Unfortunately, Jeff Sessions is one of those people.”

“There’s a level of power that comes with those drug laws that is very easy for them to get used excessively or abused. Holder, through his series of memos, was really trying to tame that urge,” said Mona Lynch, an expert on federal drug laws at the University of California-Irvine. “It’s a very small minority that think the length or the kind of sentences that can get meted out under federal drug laws are appropriate. Unfortunately, Jeff Sessions is one of those people.”

As a federal prosecutor in Alabama, Sessions aggressively prosecuted drug crimes, and he is adamantly opposed to marijuana legalization. He helped draft the 2010 law signed by President Barack Obama that reduced the sentencing disparity between convictions for possession of crack and powder cocaine, but has since emerged as a leading opponent to sentencing reform in the Senate.

In his speech on May 12, Sessions blamed drug trafficking for the recent uptick in the national homicide rate. He’s repeatedly drawn a connection between the homicide increase and drug trafficking by undocumented immigrants and cartels. Thomas Abt, former chief of staff for the DOJ’s Office of Justice Programs, told Mother Jones in an interview in February that there’s no evidence that the two are related.

In a certain sense, the impact of Sessions’ policy change could be be limited, says Western. Less than 10 percent of the nation’s approximately 2 million prisoners—or around 190,000 people—are incarcerated in federal prison. Of those, about half have been convicted of a drug offense. Last year, nearly 9,000 people were sentenced on a federal drug charge that carried a mandatory minimum sentence, nearly all of them for dealing. Still, the shift would likely have a disparate impact on people of color—who are disproportionately incarcerated and have been sentenced to mandatory minimums at much higher rates than their counterparts in the past.

The on-the-ground impact of Sessions’ recent policy change will partially depend on who gets appointed to fill the posts of the 94 federal prosecutors Trump fired in March, says Lynch. For those hoping for criminal justice reform, the prospects aren’t promising—Lynch says she thinks Trump will rely largely on Sessions’ recommendations. Still, prosecutors who are more uncomfortable with mandatory minimums in some districts could be more selective about what drug cases they bring. “My guess is that there’s going to be relatively large geographic disparities,” Lynch told me. Southern districts—where prosecutors have been resistant to reform—will likely bring more drug cases than prosecutors in the Northeast and Western districts.

“Decades of experience shows we cannot arrest and incarcerate our way out of America’s drug problem,” stated the Law Enforcement Leaders to Reduce Crime and Incarceration.

Criminal justice reform groups immediately slammed Sessions’ policy announcement last Friday. The Law Enforcement Leaders to Reduce Crime and Incarceration, a police and prosecutors group focused on smarter policing, stated that “decades of experience show we cannot arrest and incarcerate our way out of America’s drug problem.” Even before Sessions’ policy announcement last week, the executive board of the American Society of Criminologists released a statement saying that the Trump administrations early actions and rhetoric “demonstrate an incongruity between administrative policy efforts and well-established science about the causes and consequences of crime.”

Trump has charged his aide and son-in-law Jared Kushner with leading criminal justice reform efforts for the administration. It’s unclear what expertise Kushner—who has also been tasked with helping to broker peace between Israel and Palestine—has in the area. Last fall, a bill that would have cut the minimum sentence for several drug and gun offenses enjoyed bipartisan support, but it was pulled after then-Sen. Sessions led a ninth-inning charge against it. In March, Kushner met with Republican Sen. Chuck Grassley and other sponsors to discuss the legislation. Grassley has said he plans to reintroduce the bill and that he thinks it will be easier to get it passed now that the election is over.

Lynch is doubtful. “I am skeptical about that,” she said. “The appointment of Sessions does not suggest that the administration is interested in taming criminal law at the federal level.”