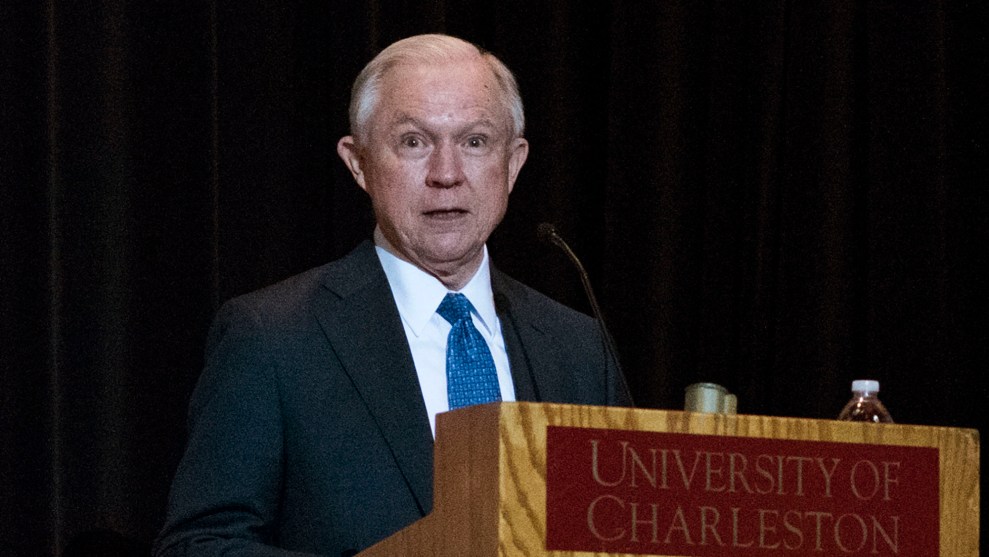 The day after James Comey was fired, Sen. Ron Wyden (D-Ore.) began raising questions about Attorney General Jeff Sessions’ role in the FBI director’s dismissal. The attorney general had recused himself from investigations related to Russian interference in the 2016 election, yet he was involved in the firing of the FBI director overseeing that probe. Speaking to reporters in the Capitol, Wyden called Sessions’ role “a blatant disregard for the pledge he made in his recusal letter.”

In a letter to Deputy Attorney General Rod Rosenstein, Conyers and Cummings lay out their case against Sessions. In his confirmation hearing, Sessions promised to recuse himself from any investigation involving Hillary Clinton due to derogatory statements he had made about her when he was campaigning for Trump. And on March 2, following the revelation that Sessions had lied to the Senate Judiciary Committee about his past contacts with the Russian ambassador, Sessions recused himself from “any existing or future investigations of any matters related in any way to the campaigns for President of the United States.”

In their letter to Rosenstein—who was also involved in the Comey dismissal—Conyers and Cummings contend Sessions violated these recusal promises in several ways. In his May 9 letter to the president recommending Comey’s firing, the pair point out, Sessions wrote that he agreed with the assessment by Rosenstein that Comey mishandled the investigation into Clinton’s emails. This, they say, appears to contradict his first recusal promise. And Conyers and Cummings’ letter cites a Reuters report that Sessions, along with Trump and Rosenstein, asked for a preview of what Comey planned to say about the Clinton email investigation when he testified before the Senate Judiciary Committee on May 3. That would be another violation of his stated recusal.

As for Sessions’ recusal regarding the Russia investigations, the congressmen note that multiple press reports have stated that the firing—in which Sessions was a direct participant—was directly related to the FBI’s ongoing Russia investigation. (Trump himself confirmed this in his Thursday interview with NBC’s Lester Holt.)

Conyers and Cummings maintain that Sessions’ actions merit discipline, perhaps termination. The two Democrats raise the possibility that he broke a law barring Justice Department officials from participating in any investigation that presents a conflict of interest. They also request that Rosenstein answer questions about Sessions’ conduct, including whether Sessions consulted with ethics officials regarding his involvement in matters relating to Comey and whether Sessions took part in any discussions about the Clinton email or Russia investigations.