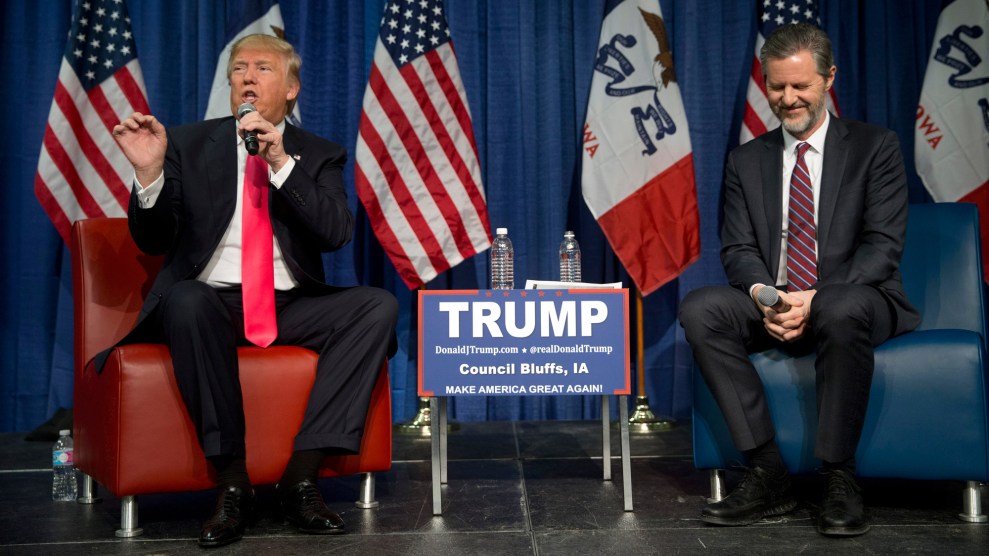 In a January 2016 speaking appearance at evangelical Liberty University, then-presidential candidate Donald Trump memorably flubbed a biblical reference and ventured, “There’s nothing like it, the Bible.” Despite an instantaneous round of Twitter eye-rolling, Trump soon picked up the endorsement of Liberty’s president, Jerry Falwell Jr. And on Saturday, Trump will return to Lynchburg, Virginia, as the first sitting president since George H.W. Bush to give the school’s commencement address.

The son of Jerry Falwell Sr.—the Moral Majority firebrand and Liberty founder who once hoped for an end to public education and blamed abortion providers, feminists, and gay rights supporters for secularizing the nation and paving the way for 9/11—Falwell Jr. has long been outspoken in his support of Trump. Way back in 2012, he brought Trump to campus to give a convocation speech and praised him as “one of the most influential political leaders in the US”—the person who’d “single-handedly forced President Obama to release his birth certificate.”

The lovefest continued at last year’s Republican National Convention, when Falwell called Trump “America’s blue-collar billionaire.” He defended the candidate in the Richmond Times-Dispatch in October, writing that he was “more concerned about America’s future than Donald Trump’s past” and calling him a “changed person.” Their alliance prompted considerable backlash from Liberty students, alumni, and even his father’s former chief of staff, Mark DeMoss, who later resigned from the university’s board of trustees after publicly criticizing Falwell’s endorsement.

Since the election, Falwell has continued to find his way into the headlines, telling the Associated Press in November that he was offered the education secretary position before Betsy DeVos but turned it down for personal reasons. He then told the Chronicle of Higher Education in January that Trump asked him to oversee a federal task force aimed at paring back “overreaching regulation” and giving “more leeway” to colleges and accrediting agencies. As of Friday, however, the administration had yet to officially announce such a task force, and a Liberty spokesperson said the school would not make Falwell available for comment about it until an announcement came from the White House.

Trump has lauded the 54-year-old Falwell as “one of the most respected religious leaders” in the country. Like his father, though, Falwell has a flair for outlandish, divisive remarks—as evidenced by these outrageous moments from the past several years:

“We could end those Muslims…”

Two days after the December 2015 mass shooting in San Bernardino, California, that left 14 dead, Falwell encouraged his students to get gun training and concealed-carry permits. “If some of those people in that community center had what I have in my back pocket right now…” Falwell said, referring to the pistol he was carrying. “I’ve always thought that if more good people had concealed-carry permits, then we could end those Muslims before they walked in and killed them.”

Soon after, Liberty ended a policy that prevented students from bringing firearms into residences. Since 2011, students and faculty with proper state permits have been allowed to carry concealed weapons on campus, a measure meant to enhance campus safety. “If something—God forbid—ever happened like what happened at Virginia Tech, there would be more than just our police officers who would be able to deal with it,” Falwell told an NBC local affiliate at the time. This fall, the university will open a shooting range on campus.

During his RNC speech last year, Falwell urged for the repeal of the Johnson Amendment, which prevents tax-exempt charitable organizations from engaging in political activity. The law’s elimination would open the door for churches and religious charities to make political contributions to campaigns, blurring the lines between church and state and emboldening the religious right’s political influence.

“Authorities have too often turned a blind eye to liberal groups, including universities where left-wing ideology is so pervasive that they have in effect have become Democratic voter indoctrination camps,” Falwell said. Getting rid of the Johnson Amendment “would create a huge revolution for conservative Christians and for free speech.” Trump said at the National Prayer Breakfast in February that he was determined to “get rid of and totally destroy” the law.

“This whole videotape thing was planned”

In October, when the “grab-’em-by-the-pussy” tape emerged, Falwell suggested that certain Republicans conspired to leak the footage. “I think this whole videotape thing was planned. I think it was timed,” Falwell told journalist Rita Cosby on her podcast. “I think it might have even been a conspiracy among the establishment Republicans who’ve known about it for weeks and who tried to time it to do the maximum damage to Donald Trump.”

He went on to say that Trump’s remarks weren’t “defensible” and added that Trump apologized for them. “I don’t think the American people want this country to go down the toilet because Donald Trump made some dumb comments on a tape 11 years ago,” Falwell said. Later, on Lou Dobbs Tonight, Falwell called leaking the tape “despicable” and that it “rises to the level of criminal behavior.”

As the tape saga unfolded, an editor at Liberty’s school paper wrote a column condemning what Trump dismissed as “locker room talk.” But Falwell pulled the column in favor of another piece, claiming he thought the column was “redundant.”

“A godly man of excellent character”

Falwell has been open about his desire to build Liberty’s football program into a powerhouse. On November 28, the school announced it would hire Ian McCaw, who served as the athletic director at football-crazy Baylor University for 13 years—and who resigned in May following the school’s wide-ranging sexual-assault scandal.

According to a May report prepared by the law firm Pepper Hamilton, Baylor athletic department personnel and football coaches “affirmatively chose not to report sexual violence”; in one case, the university revealed that officials, including McCaw, failed to report an alleged gang rape by five football players. Baylor fired head football coach Art Briles in late May, and university president and chancellor Ken Starr resigned shortly after. McCaw was put on probation and reprimanded following the report’s release, and he stepped down after Briles’ termination. (The university has since been the subject of lawsuits from former students and employees over its handling of sexual assaults.)

Following McCaw’s hiring, Falwell called him “a godly man of excellent character.” Falwell doubled-down when criticized, saying on November 29 that McCaw “is a good man who found himself in a place where bad things were happening and decided to leave.” “We concluded after our investigation that Ian McCaw did not attempt to hide the sexual assault that was reported but, instead, had one of his coaches report it to Judicial Affairs at Baylor in 2013, in accordance with Baylor’s policies and procedures at the time,” he said in an FAQ on Liberty’s site. Falwell added he couldn’t think of an athletic director “who is more sensitized to the importance of complying with the intricacies of Title IX” than McCaw.