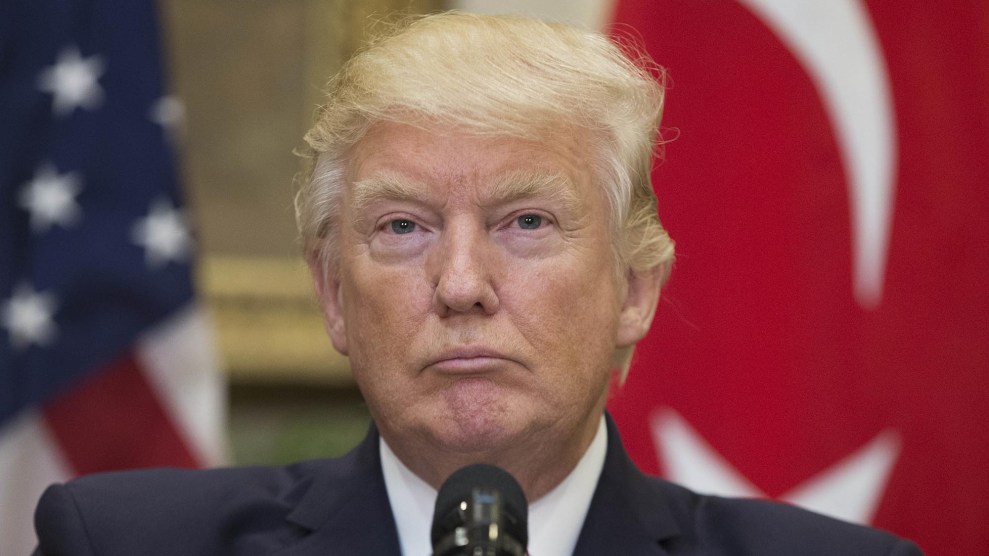 President Donald Trump asked former FBI Director James Comey to drop the FBI’s investigation of former national security adviser Mike Flynn, according to a bombshell report published by the New York Times that was based on a memo Comey wrote following the conversation.

“I hope you can let this go,” Trump told Comey in a private one-on-one meeting at the White House in February, the day after Flynn was fired for lying to Vice President Mike Pence about his conversations with Russian Ambassador Sergey Kislyak,  the Times reports. Comey supposedly felt uncomfortable with the exchange and wrote a memo detailing the discussion. From the Times:

The memo was part of a paper trail Mr. Comey created documenting what he perceived as the president’s improper efforts to influence an ongoing investigation. An F.B.I. agent’s contemporaneous notes are widely held up in court as credible evidence of conversations.

Mr. Comey shared the existence of the memo with senior F.B.I. officials and close associates. The New York Times has not viewed a copy of the memo, which is unclassified, but one of Mr. Comey’s associates read parts of the memo to a Times reporter.

Mr. Trump told Mr. Comey that Mr. Flynn had done nothing wrong, according to the memo.

Mr. Comey did not say anything to Mr. Trump about curtailing the investigation, only replying: “I agree he is a good guy.”

The Times included a denial from the White House:

The Times notes that Andrew McCabe, Comey’s deputy and the current acting director of the FBI, told a Senate panel last week that there hadn’t been any interference in the FBI’s investigation so far.

The story also reported that Trump had asked Pence and Attorney General Jeff Sessions to leave the room so he could speak to Comey by himself. In this private conversation, Trump also reportedly pressed Comey to prosecute reporters for publishing classified information.

The Times‘ explosive story came at the end of a day that was already full of White House chaos, with Flynn’s successor, retired Lt. General H.R. McMaster trying to defend Trump in the face of the previous day’s Washington Post‘s report that Trump had disclosed highly sensitive classified information during his Oval Office meeting with Kislyak and Russian Foreign Minister Sergey Lavrov.