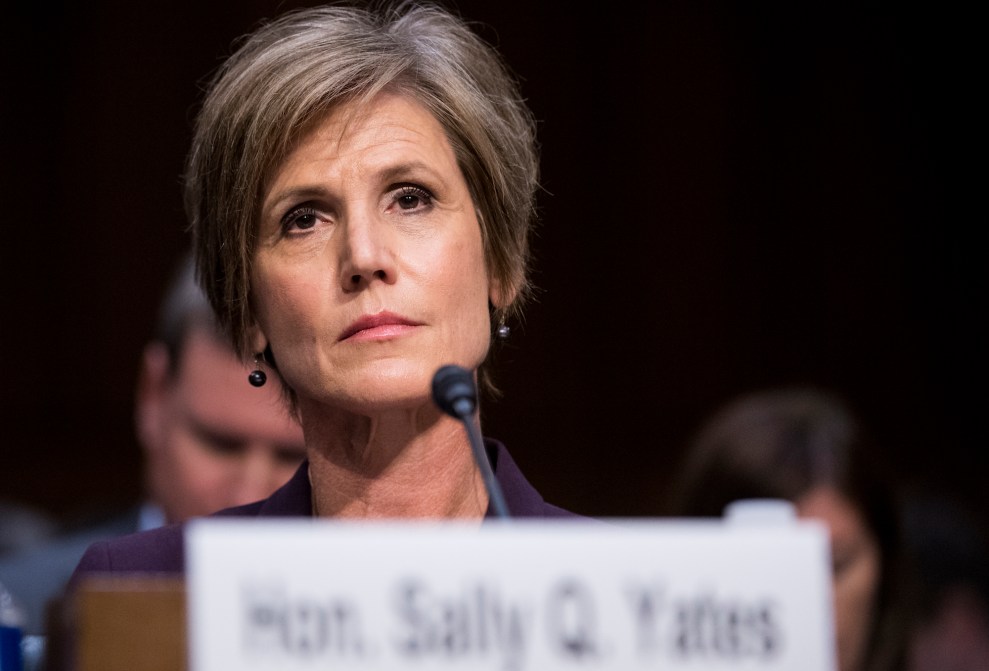 Testifying at a high-profile Senate hearing, Yates noted that on January 26, she had warned White House counsel Don McGahn that Flynn had lied to Vice President Mike Pence about conversations Flynn had with the Russian ambassador during the the presidential transition period. Yates repeatedly emphasized during the hearing that she warned McGahn that Flynn’s misrepresentations could make him vulnerable to Russian blackmail. Nonetheless, President Donald Trump didn’t fire Flynn until 18 days after Yates’ warning.

“We felt like it was critical we get this information to the White House, in part because the vice president was unknowingly making false statements to the public and because we believed General Flynn was compromised in respect to the Russians,” Yates said. “To state the obvious, you don’t want your national security adviser compromised with the Russians,” she added.

But Yates went even further, telling senators that she’d informed McGahn that Flynn’s “underlying conduct” was “problematic in and of itself.” She declined to specify the “underlying conduct” in question, but it’s likely a reference to communications between Flynn and Russian ambassador Sergey Kislyak, reportedly concerning sanctions the Obama administration had imposed on Russia.

Yates’ characterization of Flynn’s conduct as problematic appeared to challenge previous White House efforts to argue that there was nothing improper about Flynn’s underlying actions and that he was only fired because he had misled Pence.

On February 14, for example, White House press secretary Sean Spicer said, “When the president heard the information as presented by White House counsel, he instinctively thought that General Flynn did not do anything wrong, and the White House Counsel’s review corroborated that…The issue here was that the president got to the point where General Flynn’s relationship—misleading the Vice President and others, or the possibility that he had forgotten critical details of this important conversation had created a critical mass and an unsustainable situation.”

Similarly, on February 16, Trump said, “There was a certain amount of information given [by Flynn] to Vice President Pence…And I was not happy with the way that information was given. He didn’t have to do that, because what he did wasn’t wrong, what he did in terms of the information he saw…When I looked at the information, I said, I don’t think he did anything wrong. If anything, he did something right…But he didn’t tell the vice president of the United States the facts, and then he didn’t remember. And that just wasn’t acceptable to me.”

When asked Monday about Spicer’s comments, Yates said she could not speak to how he’d determined that there was nothing wrong with Flynn’s actions. “He didn’t reach that conclusion from his conversation with us,” Yates said.

Sally Yates made the fake media extremely unhappy today — she said nothing but old news!

The Russia-Trump collusion story is a total hoax, when will this taxpayer funded charade end?

Biggest story today between Clapper & Yates is on surveillance. Why doesn’t the media report on this? #FakeNews!