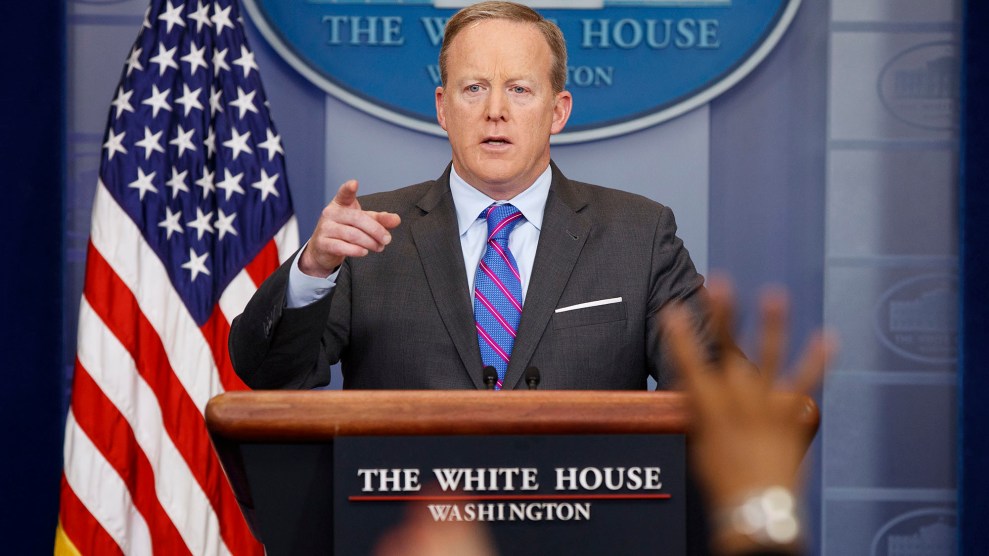 The White House has a new explanation for its decision not to immediately fire National Security Adviser Michael Flynn after learning that he could be the target of Russian blackmail efforts: The acting attorney general, who supplied that information, was a supporter of Hillary Clinton.

On January 26, Sally Yates, then acting attorney general, met with White House Counsel Donald McGahn to warn him that Flynn could be compromised by the Russians. He had lied to the Vice President Mike Pence about the content of his conversations with the Russian ambassador, and the Russians knew he had lied. But President Donald Trump waited 18 days before showing Flynn the door for lying to Pence.

On Tuesday, White House Press Secretary Sean Spicer defended the administration’s decision to keep Flynn on as national security adviser for more than two weeks after Yates’ warning by implying that Yates, a Barack Obama appointee, could not be trusted because she was “a strong supporter of Clinton.”

“One thing that I think is important to note is, let’s look at, again, how this came down,” Spicer said. “Someone who is not exactly a supporter of the president’s agenda, who a couple days after this first conversation took place refused to uphold a lawful order of the president’s…she had come here, given a heads up, told us there were materials, and at the same we did what we should do. Just because someone comes in and gives you a heads up about something and says I want to share some information, doesn’t mean that you immediately jump the gun and go take an action.”

Spicer continued, “I think if you flip this scenario and say, what if we had just dismissed someone because a political opponent of the president had made an utterance, you would argue that it was pretty irrational to act in that manner.”

After being asked multiple times if the White House took any steps to reduce Flynn’s role or access to classified information after receiving Yates’ warning, Spicer finally said, “I’m not aware of any.”