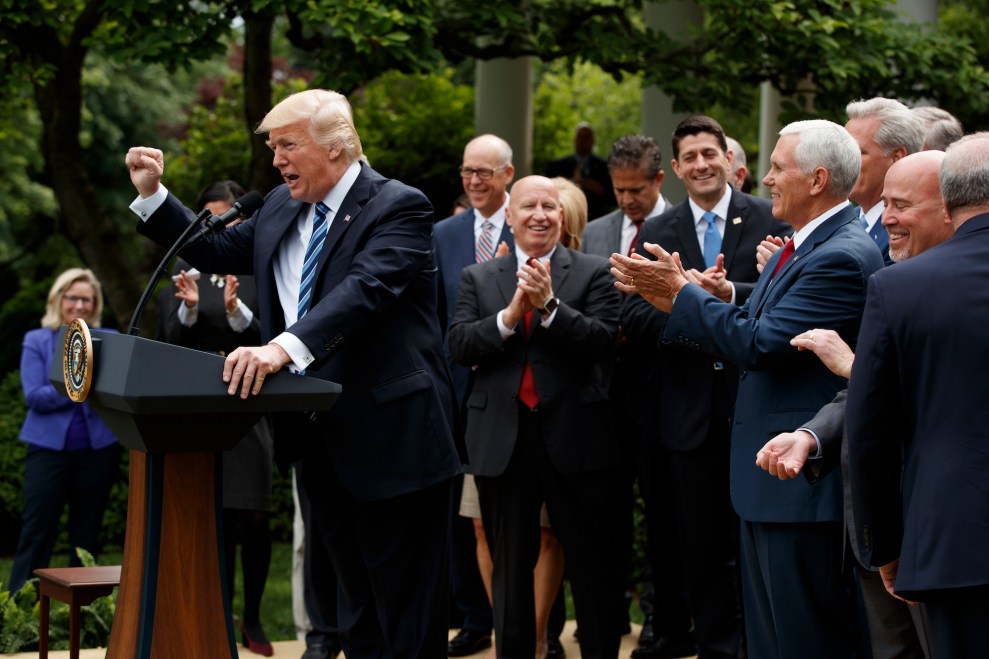 President Donald Trump stood alongside House Republicans in the Rose Garden Thursday to applaud the narrow passage of legislation to repeal and replace Obamacare. The bill, also known as the American Health Care Act, aims to effectively gut health care coverage for millions, cut Medicaid funding by 25 percent, and allow states to deny coverage for a slew of pre-existing conditions.

“As much as we’ve come up with a really incredible health care plan, this has brought the Republican party together,” Trump said. “We’re going to get this finished.”

While there were a handful of female lawmakers present, many on social media pointed to the overwhelming presence of white men on hand to celebrate a bill that seeks to eliminate federal funding for Planned Parenthood and make pregnancy significantly more expensive:

Here’s the group that decided nobody needs to go to Planned Parenthood. pic.twitter.com/eIGCIIFJMY

A bunch of rich White guys patting themselves on the back for taking away health care from poor people.

America, summed up in one photo. pic.twitter.com/3Ru2IkLaFn

The setting also appeared somewhat premature, considering the Rose Garden has been historically reserved to mark bill signings. (The American Health Care Act is still subject to a Senate vote.) Still, Trump and Republicans on hand struck a triumphant note.

“Thanks to the leadership of President Donald Trump, welcome to the beginning of the end of Obamacare,” Vice President Mike Pence said, prompting loud applause.

Earlier Thursday, cases of beer were reportedly spotted entering the Capitol, as it became clear Republicans had secured enough votes to ensure the bill’s passage.  Rep. Jason Chaffetz (R-Utah), fresh out of foot surgery, also returned to Congress to cast his vote. Many on social media derided his appearance:

Chaffetz is all smiles as he scoots back from a fully-insured surgery to repeal health coverage for millions. pic.twitter.com/XrM8DSQXO2