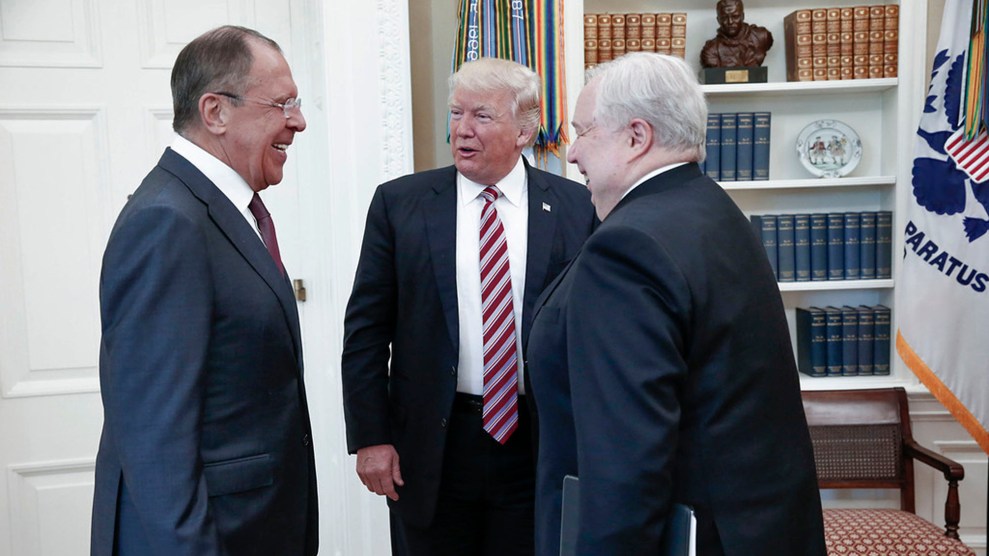 On Wednesday, as the political firestorm caused by President Donald Trump’s firing of FBI chief James Comey raged, Trump met in the White House with Russian Foreign Minister Sergey Lavrov and Russian Ambassador Sergey Kislyak. At one point, all three of them posed for a photo, each looking rather jolly.

The news soon emerged that Trump had received Lavrov in the White House in response to a request from Russian leader Valdimir Putin. So Trump was granting a favor to the fellow who had mounted a covert operation to subvert the presidential campaign. And Trump took no action at this meeting to assure the American public that he was working to prevent another such attack from Putin. The White House report on this gathering included no indication that Trump said anything to the Russians about their intervention in the US presidential election.

Since taking office, Trump has showed no sign that he takes Putin’s attack seriously and that he is committed to securing future American elections from similar cyber-assaults. In January, before taking office, Trump promised that in his first 90 days in office, he would draw up a plan for countering cyber-meddling in US elections. He missed that deadline last month, and worse, the White House couldn’t even say if anyone was working on such a project.

On Thursday morning, there was another indication this is not a priority for Trump’s administration.

Each year, the Senate intelligence committee holds a public hearing on global threats to the United States, and the heads of several intelligence agencies appear to discuss the various risks. At this annual hearing on Thursday, there were questions from senators about the Comey firing, yet few answers. (Comey’s replacement, acting director Andrew McCabe, vowed he would inform the committee if anyone tried to impede the bureau’s ongoing Russia investigation, but he refused to comment on Trump’s highly suspicious assertion that Comey thrice told Trump he was not a subject of that investigation.)

One of the more intriguing exchanges was related to the Russian hacking of the 2016 campaign. Sen. Mark Warner (Va.), the senior Democrat on the committee, asked the panel what steps were being taken to prevent a repeat of Moscow’s hack-and-leak attack. He noted that Russia might try a repeat and that other foreign governments could do the same. Warner insisted that the federal government should be working with states to secure voter files and collaborating with social-media companies to address fake news and information warfare. He asked Dan Coats, the director of national intelligence, if there were a “strategic effort” within the Trump administration to thwart another covert assault on the US political system.

Coats replied that the Russians have “upped their game” and are spreading their cyber operations “across the globe.” He stated this continued to be a “threat to our democratic process.” But Coats said he was not aware of any “grand strategy” to counter cyberattacks against the US election system. He pointed out that the various intelligence agencies can provide intelligence needed to draft such a strategy. But as far as Coats knew, no one within the Trump administration had the mission of devising an overarching plan on this front.

That was not surprising. Trump has repeatedly referred to the Russia story as fake news or a hoax. He has railed against the ongoing investigations as money-wasting charades. He warmly welcomed Putin’s henchmen into the White House the same week he fired the guy in charge of investigating Moscow’s intervention in the 2016 campaign. And he has not made any public efforts to safeguard elections from foreign intervention. Coats’ remarks were evidence that Trump remains more concerned with defending his political standing than protecting American democracy.