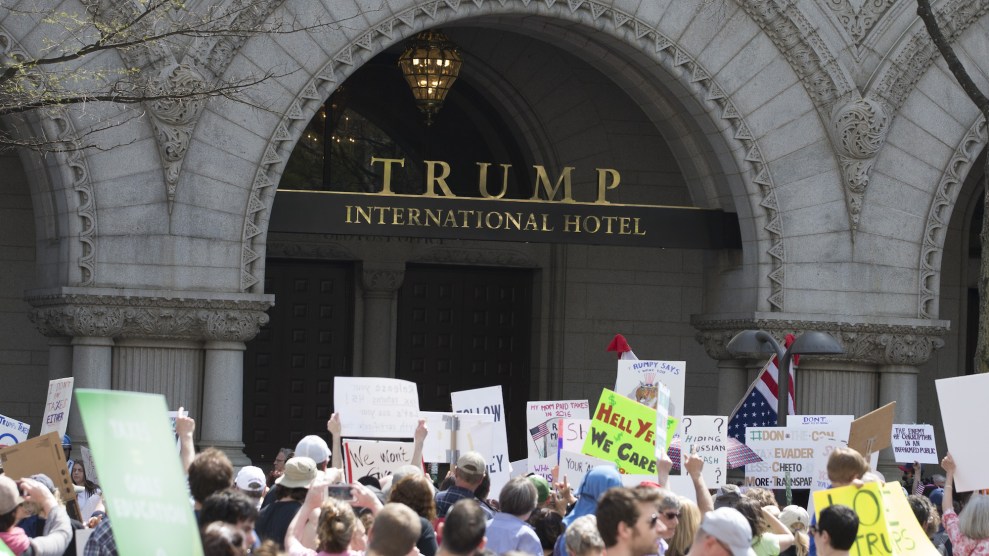 Protesters at the Trump International Hotel in Washington, DCAlex Edelman/ZUMA

The Democratic attorneys general of Maryland and the District of Columbia on Monday launched the latest salvo in the legal battle against President Donald Trump, filing a federal suit alleging “unprecedented constitutional violations” as a result of Trump’s continued ownership of his hotels and restaurants. The attorneys general say Trump has violated the domestic and foreign emolument clauses of the US Constitution, which bar elected officials from accepting payments and other gifts from outside entities.

At a press conference, Karl Racine, DC’s attorney general, said the two offices felt compelled to file a lawsuit because Congress hasn’t taken any steps to police the president’s many conflicts of interests, while Trump has not adhered to any of his promises to avoid business entanglements.

“Traditional checks and balances are failing us,” Racine said. “By not divesting from his businesses, the president has chosen to put himself and our country in the position we are in today. Every time the president has spoken about drawing a line, he has walked his promises back.”

At a January press conference, Trump said he would step back from daily operations of his businesses but would not be divesting. Since then, his son, Eric Trump, has said there will be regular meetings with President Trump to update him on how the businesses are doing.

The suit is the first to be filed by a governmental entity, but it is the third such suit targeting Trump for refusing to divest from his private business and allegedly benefiting from foreign agents and other guests with business before the federal government who patronize Trump’s properties. The first suit was filed by Citizens for Responsibility and Ethics in Washington in January, the second by a Washington, DC, restaurant that argues Trump’s ongoing ownership of his hotel constitutes unfair competition.

The new suit argues that compliance with the emoluments clause is critical to guaranteeing that “Americans do not have to guess whether a President who orders their sons and daughters to die in foreign lands acts out of concern for his private business interests; they do not have to wonder if they lost their job due to trade negotiations in which the President has a personal stake; and they never have to question whether the President can sit across the bargaining table from foreign leaders and faithfully represent the world’s most powerful democracy, unencumbered by fear of harming his own companies.”