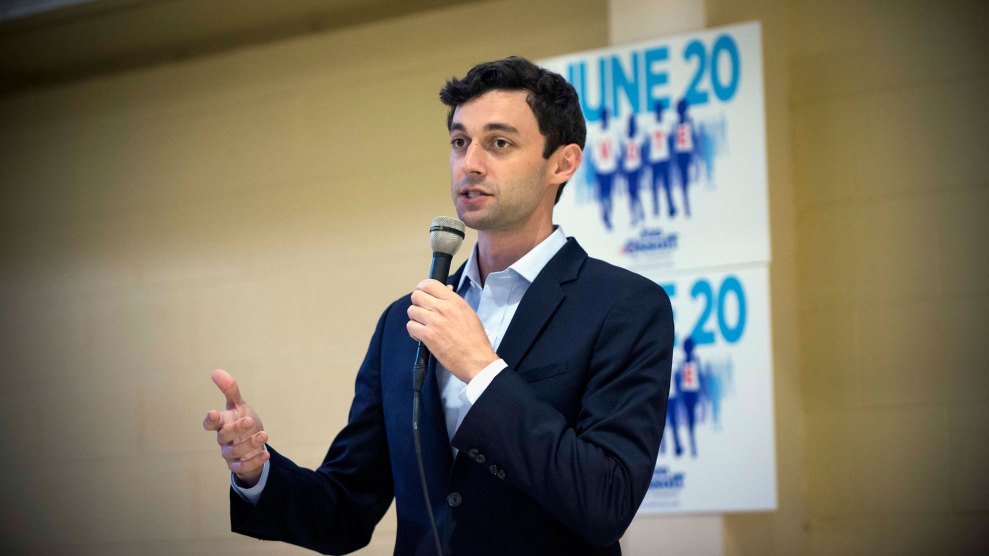 For a race that will have essentially no impact on the balance of power in Congress, next week’s special election in Georgia’s 6th District has taken on unprecedented national significance, with political observers looking to the contest as a potential harbinger of what’s to come in 2018. Democrat Jon Ossoff has raised $23 million—a record for any House race—and much of his war chest has come from out of state. President Donald Trump recently traveled to Atlanta to raise money for Republican Karen Handel, and national bigwigs such as Mitt Romney and Paul Ryan have sought to push her across the finish line. Democrats believe the historically red district, which was nearly carried by Hillary Clinton last fall, represents their best chance to put Republicans on notice and perhaps even put the brakes on Trump’s efforts to repeal and replace Obamacare.

As you might expect, Ossoff opposes the GOP’s American Health Care Act (he says it “puts Georgians’ lives at risk”), and Handel supports it. At a recent debate, they had the kind of exchange about the bill that you might expect from a race that’s been billed as a referendum on the measure. Ossoff mentioned a seven-year-old boy he’d met recently with a preexisting condition that might not be covered if the AHCA passes:

But if the fate of the AHCA hinges on what happens in Georgia, the candidates aren’t acting like it. Even as Ossoff feeds off the activism and donations of Democrats worried about the legislation, his campaign ads have hardly mentioned it. Mostly, his spots focus on centrist policy planks such as investing in entrepreneurship, cutting wasteful spending, and lowering the deficit. The closest he’s come to a full-on attack on his opponent’s position on health care in his barrage of ads is a spot hitting Handel for cutting off funding to Planned Parenthood while she was director of the Susan G. Komen Foundation—but it didn’t mention that the AHCA bill Handel supports would also defund Planned Parenthood. All told, Ossoff has mentioned Obamacare just twice in his TV ads, for a total of five seconds. (Even his attack on the bill is conservative in its frame; he accuses Handel of trying to “impose” her health care views on Georgians through the federal government.)

The Democratic Congressional Campaign Committee has spent nearly $5 million in support of Ossoff, but its ads haven’t mentioned health care either. “Our [advertising] investments have exclusively focused on Handel’s background as a career politician,” a DCCC spokesman said.

In downplaying health care on the campaign trail, Ossoff is an exception among Democratic candidates in 2017. James Thompson, who lost a Kansas special election for a House seat, and Rob Quist, who fell short in a special election in Montana last month, both made single-payer health care a central part of their platforms. Quist toured the state talking about his own preexisting condition, which stemmed from a botched gallbladder operation, and he hammered his opponent, Greg Gianforte, for supporting the AHCA in private while hemming and hawing in public. Quist’s final ad of the race was all about health care. In Virginia, former Rep. Tom Perriello built his unsuccessful gubernatorial campaign around his 2010 vote for Obamacare and released an ad after the passage of the AHCA depicting an ambulance being crushed into a box.

Just as notably, Handel has hardly talked about Trumpcare either. One Handel radio ad, featuring Sen. Johnny Isakson (R-Ga.), does mention repealing and replacing Obamcare, but her main critique of Ossoff isn’t that he’s a liberal—it’s that she thinks he’s a liar. (Her campaign has accused Ossoff of inflating his national-security credentials.) Paul Ryan’s congressional Conservative Leadership Fund super-PAC, meanwhile, has tied Ossoff to Rep. Nancy Pelosi and “big government,” anti-fascist protesters, and Kathy Griffin. He has been attacked for dressing up as Han Solo in college and for working for Al Jazeera. These are mostly the kind of cultural plays that you’d expect against a white millennial Democrat in the South—but it’s a long way from the anti-Obamacare politics embraced by the seat’s former representative, Health and Human Services Secretary Tom Price.

The Ossoff race could still strike a blow against the AHCA and Trump even if the candidates aren’t talking about it. The 6th Congressional District is a potential bellwether for other swing districts in states including California and Kansas, and members of Congress are usually pretty vigilant when it comes to reading the tea leaves. Some of them already seem to have received the message: At a recent closed-door fundraiser, Arizona Rep. Martha McSally, who voted for the AHCA, told donors that she was “going down with the ship” unless the political climate changed.