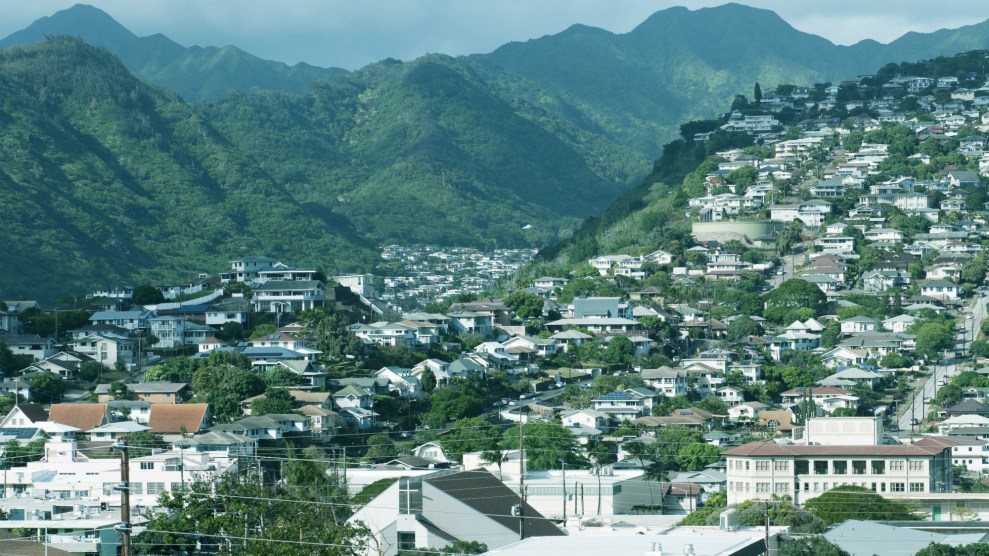 Hawaii has become the first state in the country to officially start exploring a means to provide its residents with a guaranteed basic income. The bill, passed recently by both houses of the state legislature in a unanimous vote, declares that all Hawaiians “deserve basic financial security” and directs state agencies to analyze “universal basic income” and similar policy options.

“As innovation and automation and inequality disrupt our economy, we want to make sure that everybody benefits and nobody is left behind,” the author of the bill, state Rep. Chris Lee of Kaliua, told Mother Jones. “It’s past time that we had a serious talk about not just tweaking our economic policies but having a new discussion from the ground up about what our values and priorities are.”

Though Alaska has, since 1976, provided its residents with a stipend funded by oil revenues, Hawaii is the first state to formally consider the idea of offering its residents a basic income sufficient to cover living expenses. Enacted in early May, the resolution, Lee says, was motivated by Hawaii’s sky-high cost of living—the highest in the country—and its heavy reliance on low-paid service industry jobs.

The text of the measure focuses on the potential impact of job-killing technological change in Hawaii, citing factors such as the development of self-driving autonomous vehicles, automated grocery store checkout lines, e-commerce, and 3-D printers. Hawaii has a very limited manufacturing and tech sector, the lawmaker says, making the state and its service-focused economy particularly vulnerable to disruption.

“There has been a discussion for a long time about how do we build an economy where everybody can afford to live here and survive,” Lee says.

The idea of universal basic income, or UBI, has also been gaining traction in parts of California, albeit yet not on a state-wide level. The proposition has taken particular hold in Silicon Valley, as tech leaders look to address concerns about their industry’s displacement of blue-collar workers. Early last year, the San Francisco tech incubator Y-Combinator began rolling out a UBI pilot project in Oakland and is now giving 100 local families around $1,500 a month. In October, Facebook co-founder Chris Hughes and others launched the Economic Security Project, a $10-million fund aimed at researching and promoting UBI. In March, freshman Democratic Congressman Ro Khanna of Silicon Valley proposed $1-trillion earned income tax credit for working families—a move heralded as a major step toward UBI. And the nonprofit Golden State Opportunity Foundation is pushing to expand access to California’s state earned income tax credit in this year’s budget.

The concept has attracted the support of some well-known labor, social justice, and academic leaders, such as former Service Employees International Union president Andy Stern, Black Lives Matter co-founder Alicia Garza, and former US Labor Secretary Robert Reich. “As artificial intelligence takes over more and more good jobs, a larger percentage of the workforce will be pushed into low-wage work,” Reich, a UC Berkeley public policy professor and former Secretary of Labor under Bill Clinton, told Mother Jones. “They are going to need some universal minimum in order to ensure that everybody has at least what they need to avoid dire poverty.”

While the Hawaii bill is now on the books, it still has a long way to go before UBI becomes a reality. Now, a “basic economic security working group” will be drafted and will include leaders from government, business, organized labor, and academia. The group will assess Hawaii’s exposure to “disruptive innovation” and submit studies on UBI and similarly sweeping programs to the legislature. “There is definitely a recognition that beyond just talking about basic income that things need to change,” Lee says. “We need to take proactive action to chart a stable path forward for our economy and all of our residents.”