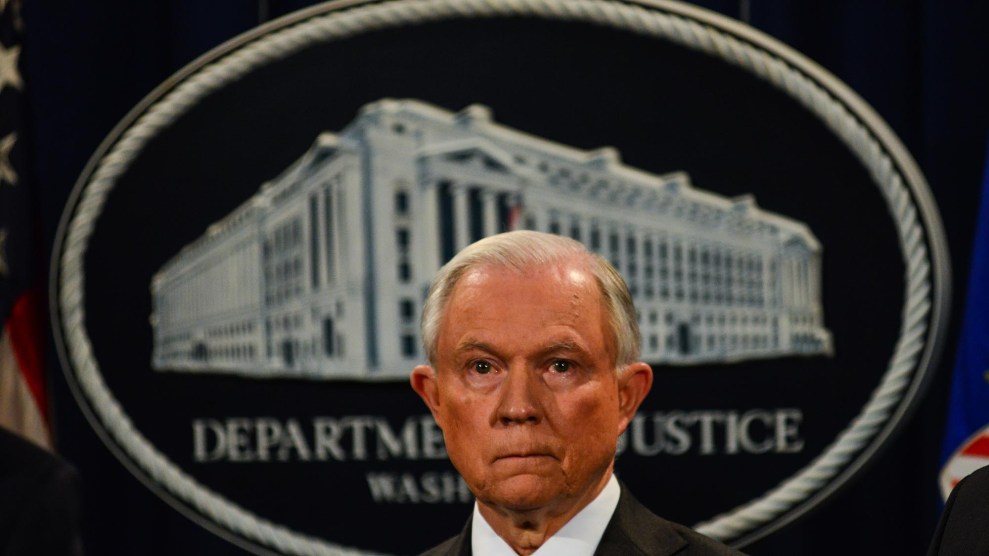 Sessions “abruptly canceled” his appearance before the committee, as well as a scheduled appearance before the House Appropriations Committee, over the weekend, according to Leahy and Sen. Janeen Shaheen (D-N.H.)—”the second time in as many months” that he had done so. Sessions is scheduled to appear later Tuesday in an open hearing of the Senate Intelligence Committee to discuss matters related to the ongoing investigation into Russia’s meddling in the 2016 presidential election and President Donald’s Trump’s firing of former FBI Director James Comey, who had been leading that investigation. Sessions formally recused himself from the Russia investigation after it was revealed that he had misled Congress about his contacts with the Russian ambassador, but he nonetheless played a role in Comey’s firing.

In a letter sent to both committee chairs, Sessions said he would send Rosenstein to the appropriations hearings, since “some members [of the committees] have publicly stated their intention to focus their questions on issues related to the investigation into Russian interference in the 2016 election, from which I have recused.” Sessions said the Senate intel committee was the “appropriate forum” for such questions.

Attorneys general of the past did not shy away from this committee’s questions, regardless of the topic, regardless of the party. Attorneys general of the past did not cower at the request of Congress to fulfill its constitutional oversight responsibility. And they didn’t agree to come and then cancel at the last minute and send their second in command in their stead, because the members of this committee may have questions they may not want to answer.

Until nowadays. And so, with respect, Mr. Rosenstein…you’re not who I’m interested in speaking with or hearing from today. I do have questions for the attorney general. I want to know why he has provided false testimony to me and to Sen. [Al] Franken [D-Minn.]. I want to know why, if he was recused from the Russia investigation, he played any role in the dismissal of FBI Director Comey. I want to know how he believes he can credibly lead the Justice Department for which he has requested $28.3 billion amid such distressing questions about his actions and his integrity.

Leahy also said Sessions owed it to the 116,000 DOJ “agents, intelligence analysts, attorneys, and support personnel”—along with state, local, and tribal law enforcement officials—to explain the the department’s budget request, which Leahy referred to as “abysmal.”

Later in the hearing, Shaheen brought up reports that Trump may try to force the removal of Robert Mueller, the special counsel now heading up the Russia probe. Shaheen asked Rosenstein whether he’d seen any evidence of good cause for Mueller’s removal (which would be required for him to fire Mueller). “No, I have not,” Rosenstein said.

Sen. Susan Collins (R-Maine) followed up, asking Rosenstein whether he’d spoken to Trump about the appointment of Mueller or discussed Mueller with the president in any way. Rosenstein said he hadn’t.

Collins also asked Rosenstein what he’d do if Trump told him to fire Mueller.

“Senators, I’m not going to follow any orders unless I believe those are lawful and appropriate orders,” Rosenstein said. “Under the regulation, special counsel Mueller may be fired only for good cause, and I am required to put that cause in writing. And so that’s what I would do. If there were good cause, I would consider it. If there were not good cause, it wouldn’t matter to me what anybody says.”