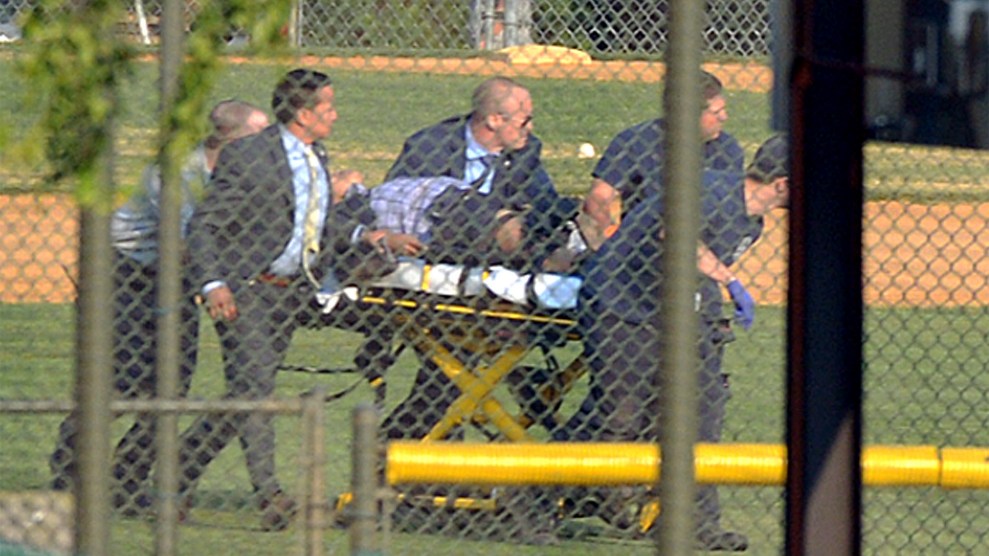 A wounded victim is evacuated from a baseball field in the DelRay neighborhood of northern Alexandria after a shooting attack Wednesday morning.Essdras M Suarez/Zuma Press

Rep. Scalise was critically injured and remains in critical condition. The other patient is in good condition.

Update, 12:44 p.m. EST:  As reports surfaced that the suspected shooter had been a Bernie Sanders supporter, the Vermont senator spoke from the Senate floor to condemn the shooting. “Violence of any kind is unacceptable in our society and I condemn this action in the strongest possible terms,” he said.

Update, 11:39 a.m. EST: In a live address from the White House, President Donald Trump said the suspected shooter, James T. Hodgkinson, has died from his injuries. Trump praised the Capitol Police officers who responded to the shooting attack. “Many lives would have been lost if not for the heroic actions of the two Capitol Police officers,” he said.

The president said Rep. Scalise remained in hospital in a stable condition after the attack.  “He’s a patriot and he’s a fighter,” Trump said. “He will recover from this assault.”

"Many lives would've been lost if not for the heroic actions of the 2 Capitol police officers."

Update, 10:50 a.m. EST: The suspected shooter has been identified as James T. Hodgkinson, according to law enforcement officials who spoke to the Washington Post and NBC News.

A shooting at a congressional baseball practice in Virginia left multiple people wounded Wednesday morning, reportedly including Rep. Steve Scalise (R-La.), one of his aides, and Capitol Police officers. The House Majority Whip is in stable condition and undergoing surgery at MedStar Washington Hospital Center, his office said in a statement.

The Alexandria Police Department confirmed that the suspect has been taken into custody.

UPDATE: Suspect is in custody and not a threat. PIO will be onscene shortly to share updates.

APD PIO heading to scene, updates will be posted when available. Victims being transported to hospitals.

“We are deeply saddened by this tragedy,” President Donald Trump said in a statement. “Our thoughts and prayers are with the members of Congress, their staffs, Capitol Police, first responders, and all others affected.”

Members of Congress who were at the baseball field when gunfire broke spoke to news outlets to give their accounts of the shooting.

“All of a sudden we heard a shot, a very loud shot,” Sen. Jeff Flake (R-Ariz.) said on CNN. “Everybody thought it sounded like a gun—and then boom, rapid succession after that.”

“He had a rifle of some type,” he added.

"All of the sudden we heard a shot … then boom, rapid succession" says Sen. Jeff Flake https://t.co/xbHk3Ahfck https://t.co/CTGeIa3SjI

“Everybody probably would have died except for the fact that Capitol Police were there,” Sen. Rand Paul (R-Ky.) told MSNBC’s Morning Joe.

Rep. Mo Brooks on CNN says the shooter basically ran around the bases. Said Scalise "crawled into the outfield leaving a trail of blood"

This is a breaking news report. We will update with more information as it becomes available.