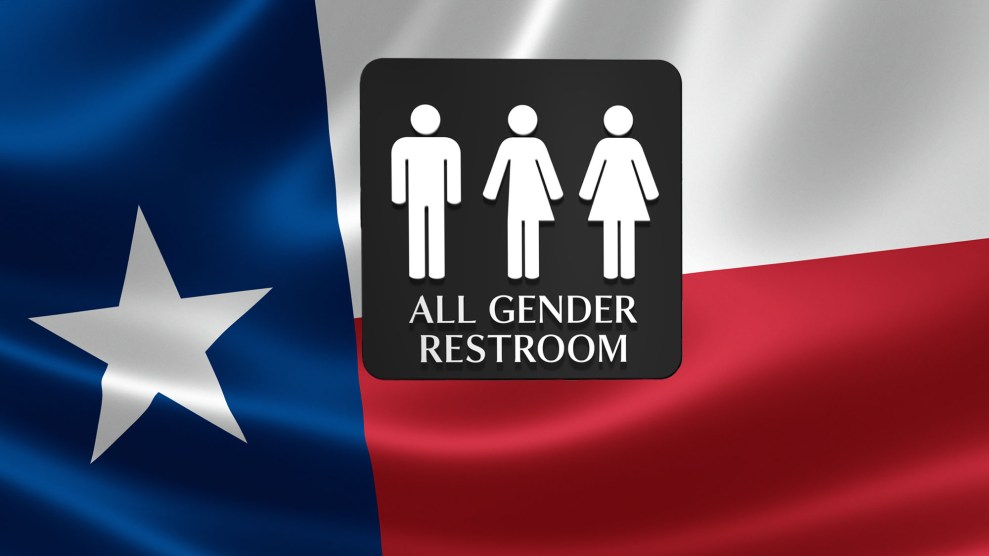 3D rendering of the flag of Texas on satin texture.ronniechua/Getty/mrtom-uk/Getty

Texas lawmakers have gone into overtime with a 30-day special session that largely came about because of a power struggle in the leadership over the issue of whether transgender people should be able to use the bathroom that best aligns with their gender. The state Senate has already passed a measure to do just that, but the proposal and others like it are likely to stall in the House.

The battle lines were drawn after Lt. Gov. Dan Patrick forced the special session in order to severely limit the rights of transgender people in the state (as well as reform property taxes). Governor Greg Abbott backed him up and called lawmakers back to the statehouse, but House Speaker Joe Straus has been pushing back. Standing with transgender advocates and business leaders who argue the legislation will lead to backlash and hurt the state’s economy, he has opposed the bill and short-circuited its advancement.

When two senators were apparently sent by Patrick to discuss the anti-transgender proposals leading up to the special session, Straus was having none of it. “I’m disgusted by all this,” he said, as reported by the New Yorker. “Tell the lieutenant governor I don’t want the suicide of a single Texan on my hands.” (A spokesperson for Patrick disputes that he sent the senators.)

When the session got underway last week, hundreds of people appeared at the statehouse to testify on Republican state Sen. Lois Kolkhorst’s bill, which would force transgender people to use the bathrooms and locker rooms that correspond with their birth certificates in government buildings and public schools. The proposed legislation would also prohibit transgender students from participating in athletic activities with other students of their gender. Most who showed up were vehemently opposed to the measure.

Throughout the emotional ten-hour hearing, transgender advocates and their families begged lawmakers to consider the consequences the legislation would have on the mental health and physical safety of transgender Texans. Many testified the legislation would force them or their loved ones to break the law or out themselves in public spaces, which, they explained, would put them at great risk given the high rates of violence against transgender people.

“At times it’s really hard to be happy when you live in a world that tells you ‘You don’t exist and your life matters less than the lives of other people around you.’”

Some of the most powerful testimony came from a young transgender person. “You guys have heard a lot of statistics about the 40 percent of transgender students who attempt suicide,” they testified before the State Affairs committee. “I have also been in that situation, and that is something that only my very closest friend knows, not even my parents.” The young person wished “that I could say that I was really happy I made it through that, but at times it’s really hard to be happy when you live in a world that tells you ‘You don’t exist and your life matters less than the lives of other people around you.’”

After the hearing, the committee voted to move the measure forward for the full Senate where, early Wednesday morning, it passed in a 21-10 vote. But in the House, Speaker Straus is expected to stonewall the legislation.

Straus, a Republican from the San Antonio area, has opposed Patrick’s efforts for nearly as long as they’ve existed. Initially he declined to openly challenge Patrick. “This isn’t the most urgent concern of mine,” Straus said at a Texas Tribune event shortly after November’s election, but in January, he asked business leaders to “speak up” if they had concerns about what the impact of the legislation might be on them.

When lawmakers began their session in January, it marked the beginning of five months of political gamesmanship during which the legislation toggled between being advanced and blocked. In March, the Senate, with the lieutenant governor at the helm, passed the anti-transgender legislation, but Patrick knew it faced an uphill battle in the House. “I think the Speaker is out of touch with the voters,” Patrick complained the following day during an interview with a Dallas radio station. “This is an issue that people, supporters, constituents, voters want.”

“I think the Speaker is out of touch with the voters. This is an issue that people, supporters, constituents, voters want.”

In May, before the Texas legislature ended its regular session, Patrick threatened to force a special session if bathroom legislation wasn’t passed. Only then did Straus allow a bathroom measure to advance—but it wasn’t quite what the lieutenant governor had in mind.

The House bill would have required school districts to provide a private alternative to students who don’t want to use the bathroom or locker room of their sex assigned at birth. The bill was vague, seemingly leaving the door open for schools to permit transgender students to use the bathroom of their choice. Straus refused to take the legislation any further. “If the Senate wants to pass a ‘bathroom bill,’ it can concur with the bill we passed earlier week,” Straus said during a press conference in May. “The House has compromised enough on this issue.” During another press conference that same day, Patrick said the speaker’s compromise was no compromise at all. “Joe Straus is the one causing the special session,” the lieutenant governor said. “I’m just allowing it to happen.”

The lieutenant governor doesn’t have the power to call a session, but he ultimately decides whether a bill makes it to the Senate floor. Patrick held hostage legislation unrelated to the bathroom bill that was required to keep a handful of state agencies open, including the Texas Medical Board. Without that bill’s passage, a special session to consider it was all but inevitable; Patrick, though, still had to ensure debate over the bathroom bill would be on the agenda—something that can only be set by the governor.

The Republican governor hasn’t taken the guns-blazing approach Patrick has toward transgender rights. In fact, for most of the year’s legislative session, he wouldn’t say whether he supported the discriminatory measures being considered, despite national attention to the issue. He only broke his silence and said he supported the measures in April, after months of debate.

I support the principles of both the Senate & House to protect privacy in bathrooms. We will work to get a bill to my desk. #txlege #tcot https://t.co/sDiECfHbdd

When the governor announced he was calling lawmakers into overtime, Abbott explained it was “because of their inability or refusal to pass a simple law that would prevent the medical profession from shutting down.” Even so, the governor put the bathroom bill on his list of 20 agenda items, giving Patrick another shot. “If I’m going to ask tax payers to foot the bill for a special session,” Abbott said, “I intend to make it count.”

The move left Straus anything but pleased. In remarks during a Texas Association of School Boards’ conference, he joked about a young boy excited about “a room full of horse manure.”

“The boy said, ‘With all this manure, there must be a pony in here somewhere,'” Straus said. “So I’m going to take the optimistic approach to the special session and keep looking for that pony.”

The House Speaker isn’t being “helpful or professional,” Patrick retorted. “I don’t want this to be a battle between us. But I’m not going to let anyone take on Greg Abbott when he’s trying to do the will of the people and say it’s a bunch of horse manure.”

Despite pressure from Texas’ two most powerful elected leaders, Straus isn’t backing down. Overseeing the House, he has a significant amount of power—perhaps enough to keep the Senate bathroom bills from progressing in his chamber. The House Speaker chooses which committee reviews a bill and appoints the members of each committee. Even if anti-transgender legislation makes it through the first committee, the legislation would proceed to another committee Straus appoints that controls the agenda on the House floor.

Meanwhile, Patrick doesn’t have the same leverage in the special session because he can’t hold the existence of a vital state agency hostage. The governor made keeping the Texas Medical Board and other state agencies open the first item on the agenda and said nothing else could move forward until that passed. In response, the lieutenant governor fast-tracked the legislation, and it passed both houses without delay.

Until the special session ends, pressure will remain on Straus and his peers. The Episcopal Church,  other religious groups, and business leaders are writing to Straus, urging him to stay the course. Some advocates are taking a markedly different approach. Earlier this month, one transgender woman, Ashley Smith, attended an Abbott campaign event and took a picture with the governor. She then posted it online and called him her “bathroom buddy,” noting Texas’ top elected official couldn’t tell she was a transgender woman. Her Instagram post went viral.