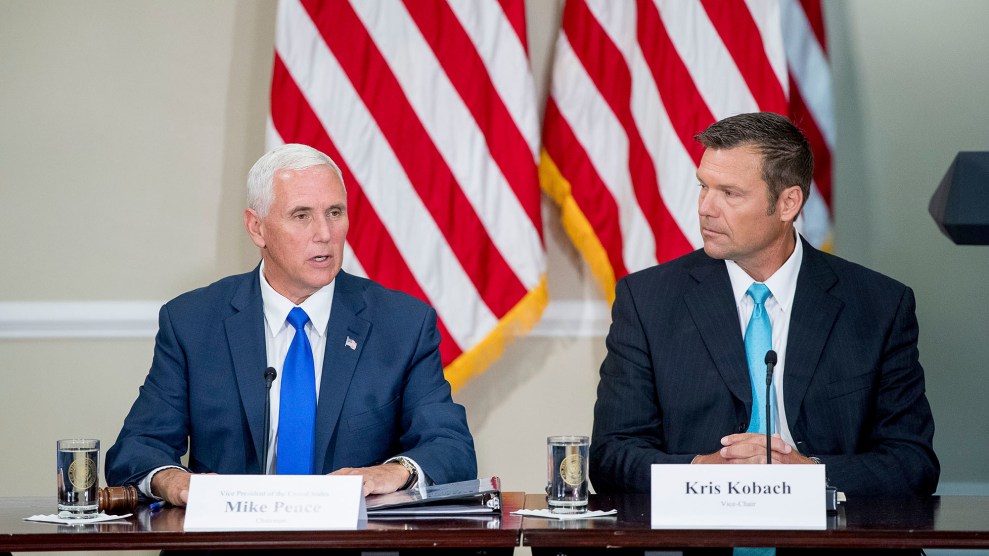 The first meeting of President Donald Trump’s election integrity commission on Wednesday was notable for the commissioners’ focus on voter fraud—and a complete absence of discussion of the obstacles keeping people from the polls.

Voting rights groups and election experts have warned that the Presidential Advisory Commission on Election Integrity has set out to create justifications to place new restrictions on registering to vote and casting a ballot. The commission’s first meeting is likely to amplify those concerns.

Kansas Secretary of State Kris Kobach, the commission’s vice chair, suggested five areas for the commission to investigate: accuracy of voter rolls, voter fraud, voting by mail and risk of fraud, cyber security regarding state voting systems, and voter intimidation. About the cyber security issue, arguably the most pressing after Russia breached systems in 39 states before the November elections, Kobach added, “We may potentially want to address, but we certainly don’t have to.”

Multiple civil rights groups have sued the commission in the last week, alleging, among other concerns, that the commission violated a federal open meeting law by holding its first organizational call without public notice. But in the first public meeting on Wednesday, which was livestreamed, Kobach raised the possibility that some of the commission’s deliberations should take place behind closed doors. He said that by publicly discussing vulnerabilities in election systems, the commission would give potential criminals a roadmap to commit fraud.

One Democrat on the commission, Alan King of Alabama, stressed that voting machines are growing old and must be replaced. Several other commissioners did not seem to share his concern, and another Democrat on the committee, New Hampshire Secretary of State Bill Gardner, expressed dismay at the idea of spending millions of dollars every decade to update voting machines because technology moves quickly. “Counties and states have to have this money,” King argued. “Things are going to go wrong. You need money to fix them.”

Christy McCormick, a Republican member, said she wanted the panel to investigate how voter crimes are identified and prosecuted. She noted that she has personally witnessed people impersonating others—prompting incredulous experts and reporters to wish she had given more details.

Hans von Spakovsky, a former Justice Department lawyer who’s generated controversy with his activism on conservative voting priorities like voter ID laws, said the commission should ask the Department of Homeland Security for information from immigrant naturalization applications in order to get data on noncitizens who may be voting. As experts quickly noted, DHS is not legally allowed to share that information:

von Spakovsky is now saying that he needs data from DHS. DHS is legally prohibited from giving that data to the Commission.

The commission adjourned Wednesday afternoon without more than a stray phrase about voter suppression, the impact of policies like ID requirements on minorities voters, or the threat posed by Russian hacking.