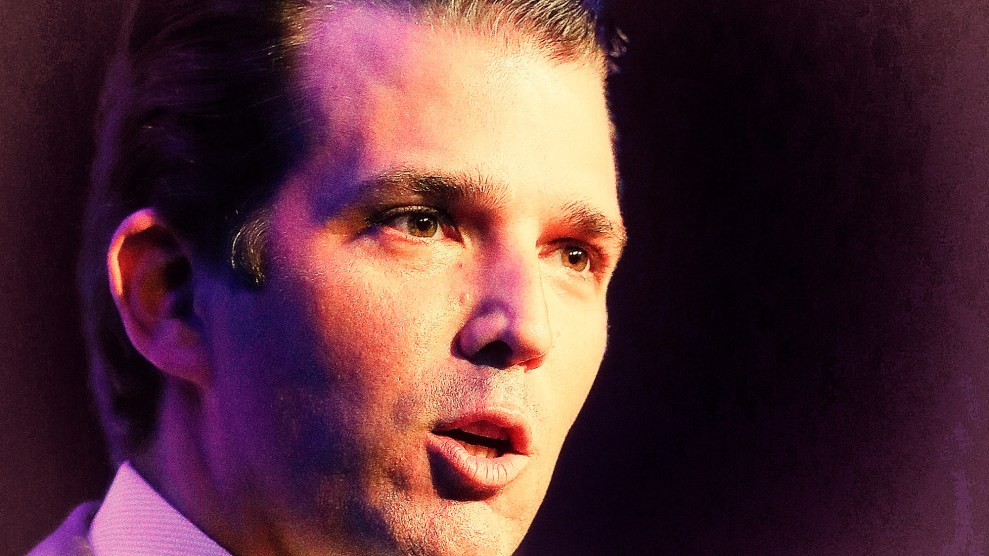 The news for Donald Trump Jr. isn’t getting any better.

The New York Times reported Monday night that prior to meeting with a Kremlin-linked lawyer in June 2016, the president’s eldest son was informed in an email that the lawyer could provide damaging information about Hillary Clinton and that the Russian government was the source of that information.

Citing three people with knowledge of the email, the Times reported that the email was sent to Donald Trump Jr. by a publicist and former British reporter named Rob Goldstone, who helped broker the meeting:

In a statement on Sunday, Mr. Trump acknowledged that he was interested in receiving damaging information about Mrs. Clinton, but gave no indication that he thought the lawyer might have been a Kremlin proxy.

Mr. Goldstone’s message, as described to The New York Times by the three people, indicates that the Russian government was the source of the potentially damaging information. It does not elaborate on the wider effort by Moscow to help the Trump campaign. There is no evidence to suggest that the promised damaging information was related to Russian government computer hacking that led to the release of thousands of Democratic National Committee emails.

The meeting in question, with Russian lawyer Natalia Veselnitskaya, also involved Jared Kushner, the president’s son-in-law, and Paul Manafort, who at the time was the head of the campaign. The meeting was first reported by the Times on Saturday. At first, Trump Jr. said the meeting simply dealt with the issue of a dispute between the United States and Russia over international adoptions. On Sunday (after further revelations published by the Times), he conceded that Veselnitskaya had offered derogatory information about Clinton. According to the Times, Veselnitskaya denied discussing Clinton during the meeting and said “she had never acted on behalf of the Russian government.”

A lawyer for Trump Jr., Alan Futerfas, downplayed the story in a statement to the Times Monday. “In my view, this is much ado about nothing. During this busy period, Robert Goldstone contacted Don Jr. in an email and suggested that people had information concerning alleged wrongdoing by Democratic Party front-runner, Hillary Clinton, in her dealings with Russia,” he said.

The Times also reported that Goldstone initially said he was unaware of any participation by the Russian government in the incident:

Goldstone, who wrote the email over a year ago, denied any knowledge of involvement by the Russian government in the matter, saying that never dawned on him. “Never, never ever,” he said. Later, after the email was described to The Times, efforts to reach him for further comment were unsuccessful.