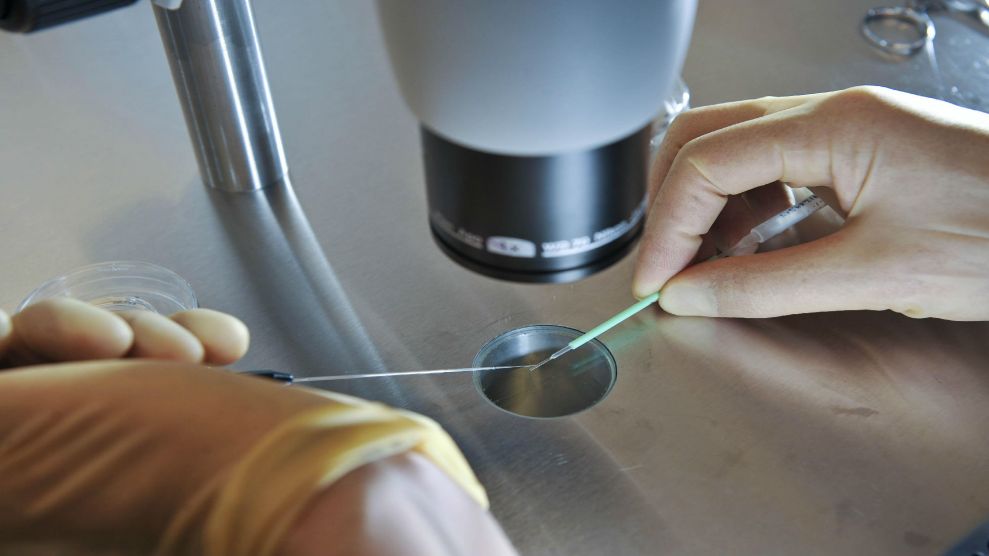 For the first known time in the United States, scientists used a gene-editing technique called CRISPR to modify early-stage human embryos, according to a report published Wednesday in MIT Technology Review.

Since the development several years ago of CRISPR, a tool that allows scientists to change sequences of DNA within a cell, scientists have speculated about its potential to free families of genetic disease or stop the spread of other diseases like malaria, among other possibilities. But the technology also raises major ethical questions.

Here’s a quick rundown of the latest breakthrough—and how it could change the way we think about human reproduction and, well, humans themselves.

How did the experiment work?

According to MIT Technology Review’s report, a team of researchers at Oregon Health & Science University, led by geneticist Shoukhrat Mitalipov, used CRISPR to correct disease-causing genes in human embryos. It’s not yet clear whether these were “viable” embryos—embryos that could, theoretically, grow into humans.

A wide range of diseases—like Huntington’s, sickle-cell anemia, and Tay-Sachs, for example—are caused by mutations in genes. It’s also not clear what genes Mitalipov and his team edited in their experiment. But regardless, it appears that their study was successful in a couple ways: First, they reportedly edited a greater number of embryos than scientists had in previous studies. Second, Mitalipov and his team claim they did so without causing as many errors as previous scientists.

CRISPR has been used to edit human embryos a few times before; Chinese scientists did it in March. But in prior experiments, scientists ran into problems when CRISPR edits were taken up only by some of the cells in an embryo. This is called mosaicism: it means that the child that develops from the embryo could still inherit the disease that scientists tried to edit away.

According to MIT’s report, Mitalipov reduced the occurrence of mosaicism and seemed to largely avoid “off-target” edits (another kind of CRISPR error, wherein scientists accidentally alter a gene other than the one they aim to change).

Why is this important?

A couple reasons. First, it’s the only known attempt to use CRISPR to edit human embryos in the United States. More on the legality of that below.

Second, if this attempt really was successful, it’s big news for people whose families carry genetic disease. In theory, using this technique, scientists could edit not just our offspring, but our offspring’s offspring. This is called human germline editing. When scientists edit the DNA in an embryo, the changes will theoretically be inherited by each successive generation, permanently fixing the “germline”—the genetic inheritance—of a family.

Right. The ethics and laws surrounding human germline editing are murky. Scientists in favor of human germline modification often argue that the technique will help us reduce the occurrence of genetic diseases.

But critics disagree. “This is just not needed for preventing inheritable disease,” said Marcy Darnovsky, Executive Director of the Center for Genetics and Society. “There are [other techniques that] can already be used safely to prevent the births of children with serious genetic diseases in almost every case.” One example of such a technique is preimplantation diagnosis, commonly referred to as PGD, which allows parents to screen embryos for certain disease-causing genes before implanting them through in vitro fertilization (IVF). But it’s not always effective—if someone carries two copies of a defective gene, for example, all their embryos would carry that gene, as well.

Darnovsky also worries about safety. “Despite whatever the claims are about safety, [like] no mosaicism, we still don’t know if that would mean it’s safe to create a new human being and anyone who tried it would be taking an enormous and unacceptable risk with that future person’s life.”

Another concern: Right now, scientists are supposed to stick to editing disease-causing genes. But the technology opens up the possibility of editing genes for “enhancement”—allowing parents to edit for certain kinds of physical and behavioral characteristics in their children. Darnovsky worries that this would usher in an era of genetic discrimination. “That would be layering new forms of inequality and discrimination onto the ones we already live with,” she said.

Probably. In 2015, Congress passed a law forbidding the Food and Drug Administration from reviewing applications for germline editing of human embryos, meaning no clinical trials can move forward with FDA funding. We don’t yet know how Mitalipov funded his project, but assuming it was funded privately, it’s perfectly legal.

That wouldn’t be the case in many other countries. The Center for Genetics and Society reports that over 40 countries, “including most with established biotech sectors, have established legal prohibitions on germline modification for human reproduction.” An international treaty also prohibits it. The United States has no such policy.

We’ll know more once the study is released, but it’s worth noting that in February of this year, the National Academy of Sciences and the National Academy published a report that said human germline editing “could be permitted in the future.” It outlined criteria for germline editing, recommending that it only be used for disease prevention. The authors of the report wrote that editing for the “enhancement of human traits and capacities should not be allowed at this time.” But the report didn’t eliminate the possibility of editing for enhancement in the future.

Reactions to the report were mixed. Some experts, like Darnovsky, feel that human germline modification should not be done for any purpose. But in an interview with Science, Eric Lander, president and founding director of MIT and Harvard’s Broad Institute, a genomics research center, said he thought the report struck the right balance of optimism and caution. “They want to put friction tape on the slope so the slope isn’t slippery,” Lander said. Whether and for how long the tape will hold is an open question.