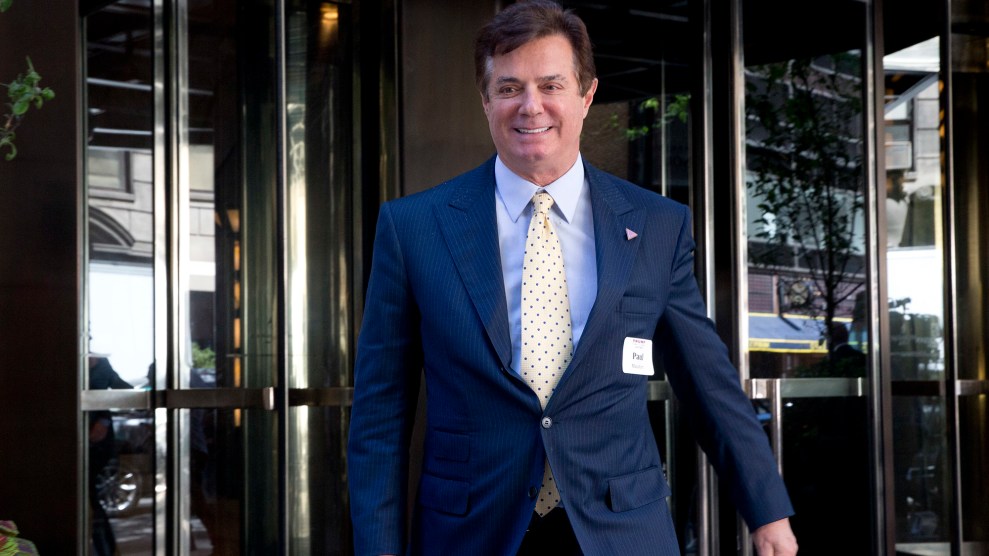 Competition between the Senate Intelligence and Judiciary committees over their respective investigations into the Trump campaign and Russia has grown fierce, with the panels taking dueling approaches to witnesses in a bid to win first crack at questioning them.

On Tuesday, former Trump campaign manager Paul Manafort submitted to a closed-door session with Intelligence Committee staff, but only after the committee agreed to Manafort’s request to sharply limit the scope of the interview. “The meeting was conducted at the request of Manafort’s legal team,” says a person familiar with the interactions, “for the sole purpose of providing information related to the recently disclosed June 2016 meeting in Trump Tower.” Manafort also turned over notes he took during that now infamous gathering where he, Donald Trump Jr., and Jared Kushner met with several Russians, including a Kremlin-linked lawyer who promised to provide damaging information on Hillary Clinton.

That approach diverges with the Judiciary Committee’s. Republican Chairman Chuck Grassley told Mother Jones that his committee refused Manafort’s offer to come in for an interview this week only under the same narrow conditions. Grassley said he backed the panel’s Democratic leader, Dianne Feinstein, who rejected interviewing Manafort with any topics taken off the table. “That didn’t satisfy her so we didn’t do it,” Grassley says. “Feinstein and I are working together.”

“Too much of this stuff is being done behind closed doors,” says Sen. Patrick Leahy.

The Judiciary Committee went through an array of postures on Manafort in recent days, listing him as a witness, along with Donald Trump Jr., for a public hearing; subpoenaing him; and then withdrawing the subpoena and negotiating terms for a later interview. But Grassley suggested the machinations amount to a tougher stance than the Intelligence panel has taken. He also suggested witnesses or their attorneys were using the competition between the two investigative panels to seek more favorable interview terms. “We can’t mess around with back and forth and playing off one committee against another,” Grassley said on Tuesday.

The Republican chairman’s remarks underscore the growing role of his committee in the Russia investigation—even as Grassley has pursued matters that appear aimed at providing political cover for the White House. Intelligence Committee leaders have described their probe as focused on Russian interference, not collusion. And Judiciary’s investigation at first appeared more focused on President Trump’s firing of FBI Director James Comey. But those distinctions are mostly rhetorical: For months, both panels have each asserted that their jurisdiction should make them the lead panel on investigating Russian meddling and related issues.

The limited scope of Manafort’s interview with Intelligence staffers meant that Manafort did not face questions about his past work for a Russian oligarch or a Ukrainian party with close ties to Putin. Also off the table were Manafort’s failure to register as foreign lobbyist, large loans he received after leaving the Trump campaign, his massive debts to Russian interests, allegations he used foreign bank accounts and real estate purchases to launder money, his efforts to weaken anti-Russia language in the Republican Party platform, and any other still undisclosed contacts he may have had with Russian agents during the campaign.

Still, Manafort committed to future meetings with Intelligence staff and members “to address the many other areas of inquiry of interest to the committee,” according to the source familiar with the negotiations. In brief separate interviews with Mother Jones, Chairman Richard Burr (R-N.C.) and ranking member Mark Warner (D-Va.) said they were confident Manafort would cooperate and potentially appear for a public hearing.

“Manafort has made himself available every time we’ve asked,” Burr said.

“We expect all the principal figures to come back and members on both sides will have a chance to question them,” Warner said. “That is still our working assumption.”

A spokesman for Manafort and his lead attorney, Reginald Brown, declined to comment.

Some lawmakers suggest both the Judiciary and Intelligence committees are compromising too readily with witnesses. “Too much of this stuff is being done behind closed doors,” Sen. Patrick Leahy, (D-Vt.), a former Judiciary Chairman, and the longest serving current senator, tells Mother Jones. Leahy says staff interviews can be useful, but that they can also delay vital public hearings, where witnesses can always assert Fifth Amendment rights if they’re reluctant.

“There should be no limitations,” Leahy says. “I don’t see where the Senate or the public gains anything from that.”