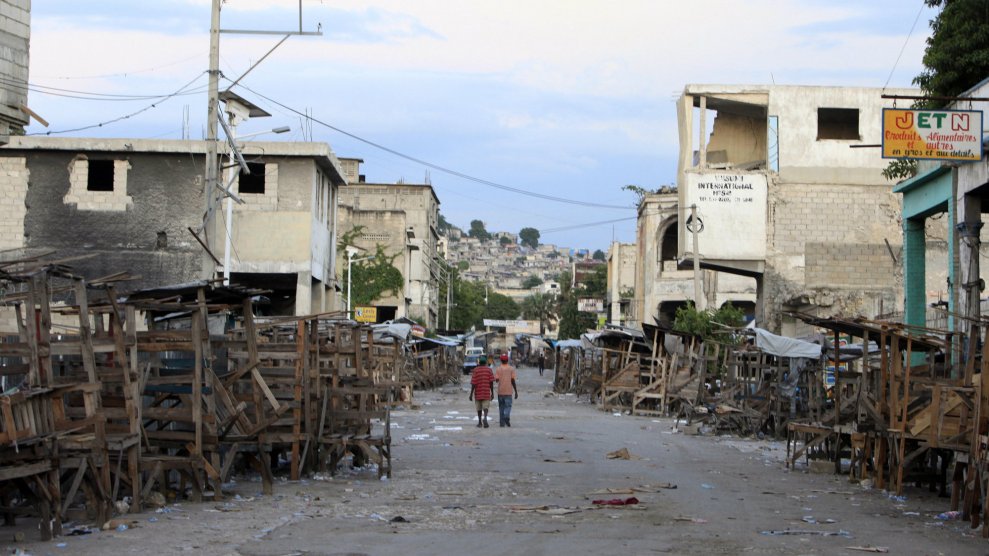 This story is the second in a series about the Trump administration’s potential elimination of Temporary Protected Status for people from Haiti, Central America, and elsewhere. Read about the administration’s actions on Haiti here.

In Haiti, 26-year-old Marie struggled to make ends meet. Unlike many in the northern city of Gonaïves, where she lives, she did have a paying job—she was a secretary for a transportation company—but after buying groceries and caring for her ailing mother, her monthly paycheck was gone.

Marie thought that if she could work for a few months in the United States, she might be able to save up enough money to ease life back home. So in October 2016, she obtained a B2 tourist visa that allows her to travel within the United States for a limited period of time. After saving up money for a plane ticket, she arrived in New York in May. Though the visa doesn’t expire until January 2021, she’s only authorized to remain until November.

“I’m scared to go back,” Marie tells me. “It’s not that I don’t like my country, but Haiti can’t offer me anything.”

Marie is expressing the dilemma faced by many Haitians living in the United States, especially those with temporary protected status, a special reprieve for foreign nationals whose home countries are facing some type of humanitarian disaster. After the 2010 earthquake rocked the Haitian capital of Port-au-Prince and left 300,000 people dead and 1 million more displaced, the Obama administration halted deportations of Haitians living illegally in the United States and, the following year, granted Haitian nationals TPS in order to give the country a chance to recover. An estimated 50,000 Haitians now have the special status, which can be renewed for up to 18 months at a time.

In late May, the Trump administration announced that it would extend TPS for Haitians for only six more months. In January 2018, the tens of thousands of Haitians working and living legally in the United States will be forced to repatriate or risk remaining as undocumented immigrants facing the threat of deportation.

But what will they be returning to?

My family is Haitian and Marie is a distant relative. In the early ’80s, my parents had each immigrated to Brooklyn, New York, where they met and married. They overstayed tourist visas and were undocumented for five years, but thanks to Ronald Reagan’s Immigration Reform and Control Act, my dad was able to obtain a green card in 1986. Today, my parents are American citizens, but our connection to Haiti still runs constant and deep.

Roughly the size of Maryland, Haiti is home to nearly 10.5 million people. The unemployment rate hovers slightly above 40 percent, but the real number is hard to pin down because most of the workforce participates in the informal economy, selling food or clothing or live chickens at street markets or from their homes. The economic inequality is stark: Nearly 60 percent of the population lives on $2 a day while the richest 20 percent earn 64 percent of all income. Basic necessities such as clean water and clothing are in short supply. Should the Trump administration follow through and not extend TPS for Haitian nationals, they will return to a Haiti suffering from a shortage of housing, jobs, food, and health care.

Marie grew up in Gonaïves, a city of 300,000, with her mom and one sister. She finished secondary schooling and studied administrative science in college, hoping to become an executive assistant.

“The hardest thing is finding a job,” she says. The bus company she worked for transported customers between cities, mostly Gonaïves to Port-au-Prince and back again.

“When you’re looking for a job, you have to negotiate,” she explains. And she doesn’t mean salary or health benefits. “Sometimes the interviewer expects you to sleep with him or her.”

“When you’re looking for a job, you have to negotiate,” Marie explains to me. And she doesn’t mean salary or health benefits. “Sometimes the interviewer expects you to sleep with him or her.” Though Marie is an adult, she is petite and could pass for a teenager. It’s easy to see how someone with power could take advantage of her.

But her job didn’t provide much economic security. Paychecks would sometimes appear three months late. And even when she did get paid on time, prices were the same as in the United States. “When the American prices go up, so do ours,” she says. “But they don’t raise our salaries.” It takes about 65 Haitian gourdes to make one American dollar. The country-wide minimum wage is less than $5 a day. If someone set out to purchase rice, milk, and eggs, they’d spend the same amount as your average American. Once, on a visit with my paternal grandmother, I slipped her $20 and her eyes lit up. My father later told me that I had basically just given her a small fortune.

With few opportunities on the island, Marie worries that desperate people will turn to increasingly desperate measures. “Maybe kidnapping and corruption will go up,” she says ruefully. A sluggish economy has already been cited as a cause behind kidnappings. Devaluation of the Haitian gourde and major crop losses due to a yearslong drought contributed to the slow progress of Haiti’s economy in 2016. And because unemployment and poverty are rampant, the housing situation is bleak.

Seven years after the earthquake, about 55,000 people remain in the displacement camps that sprang up in the immediate aftermath. Others live in tent cities along the Dominican Republic border after an immigration ruling forced out tens of thousands of Haitians and their descendants.

The hardships facing those still in Haiti further complicate the return of others who had been in the United States. Carlene, who asked only to be identified by her first name because her future plans could include coming to live or work in the United States unlawfully, says there simply isn’t enough room for a huge influx of returnees. “In areas where there are a lot of people, sometimes five or six people live in one room,” the 35-year-old woman who lives in Port-au-Prince told me. What’s considered middle-class living is still substandard compared with the United States. “Middle-class families might have a two-room house, but two or three people might share a room,” she says.

Further exacerbating the housing shortage and chronic unemployment are the recurring natural disasters. Haiti is subject to yearly tropical storms; in 2008, four back-to-back storms devastated the country. Last October, Hurricane Matthew came ashore on Haiti’s southern coast with roaring 145 miles-per-hour wind and to up to 40 inches of rainfall in parts of the country. The storm killed about 1,000 people and forced 175,000 more to evacuate. Immediately after the storm, reports from Haiti indicated that 90 percent of some southern coast areas had been completely destroyed.

“A lot has been done, but more needs to be done,” El-Mostafa Benlamlih, the head of the UN Development Program for Haiti, told the Miami Herald in April. “We still need humanitarian assistance and to help this country have more options.” Nine months after the hurricane, people in the affected area still wonder where their next meal will come from, or if they’ll have somewhere safe to sleep at night.

Other disasters are man-made. The United Nations has been in Haiti since 2004, after political turmoil forced out the first democratically elected president, Jean-Bertrand Aristide. The international organization is slated to end its peacekeeping mission in October. But, in October 2010, “UN troops inadvertently introduced a still-unchecked cholera epidemic,” said Steve Forester, the immigration policy coordinator at Institute for Justice & Democracy in Haiti, an advocacy group. “Haiti hadn’t had cholera in at least 100 years.”

Cholera is an illness caused by an infection of the intestine, which is spread by contaminated food or water. Symptoms include severe watery diarrhea, vomiting, muscle cramps, and more. In rich countries, cholera is not fatal because it is generally treated quickly. But in Haiti, where hospitals and qualified doctors are in short supply, treatable illnesses often turn into death sentences. So far, cholera has killed at least 10,000 Haitians and sickened hundreds of thousands more. “Haiti needs the time to deal with the triple-whammy of quake, cholera, and Matthew and the health and food insecurity crises they’ve caused,” says Forester.

In 2011, an UN-appointed panel concluded that a UN camp that housed peacekeepers from Nepal—where the same strain of the disease is endemic—was the source of the infection. The UN is struggling to come up with the resources to fund a sustained recovery effort. Forester points out that the UN has only raised $10 million of its goal of $400 million to effectively begin to combat the epidemic. In December 2016, UN Secretary General Ban Ki-moon offered a formal apology for the outbreak. “We simply did not do enough with regard to cholera outbreak and its spread in Haiti,” he said. “We are profoundly sorry about our role.”

The lack of medical care, or the difficulty in accessing it, cuts through society. Marie’s mother is suffering from a noncancerous brain tumor, and an operation would relieve her of her pain. But she would have to travel over the border to the Dominican Republic or fly to Cuba for the surgery, which is unaffordable. Although it’s illegal to work on a tourist visa, like so many other immigrants Marie manages to pick up odd jobs and send money home.

Haitians living in the United States contribute to the Haitian economy through remittances, the practice of migrants sending money to relatives in their native countries. In 2015, Haitians living in the US sent more than $1.3 billion home. Undoubtedly, TPS recipients are part of the diaspora who send money to their families—but once they are sent back, their relatives will be cut off from that badly needed source of aid.

These concerns do not appear to factor into the deadline. On May 31, about a week after announcing that TPS would only be extended to January for Haitian nationals, Homeland Security Secretary John Kelly took a trip to Port-au-Prince, the Haitian capital, to discuss repatriating Haitian nationals. On his trip, Secretary Kelly said that “Haiti is showing significant signs of recovery following the 2010 earthquake.” He included in his praise the UN’s decision to end its peacekeeping mission and the inauguration of President Jovenel Moïse in February.

Kelly didn’t see the Haiti that Marie describes. On the day of his four-hour stop, he was criticized for not visiting any of the tent cities still standing, or any of the towns devastated by cholera, or the entire communities washed away by Hurricane Matthew. Rep. Yvette Clarke (D-N.Y.) said Kelly should “spend several days in Haiti touring resettlement locations and learning from Haiti advocates about why this extension is so vital.”

Marie also thinks it would be better for TPS recipients to continue staying in the United States. “Haiti is already suffering,” she says. “If they send them back, it’ll be even harder for Haiti.”