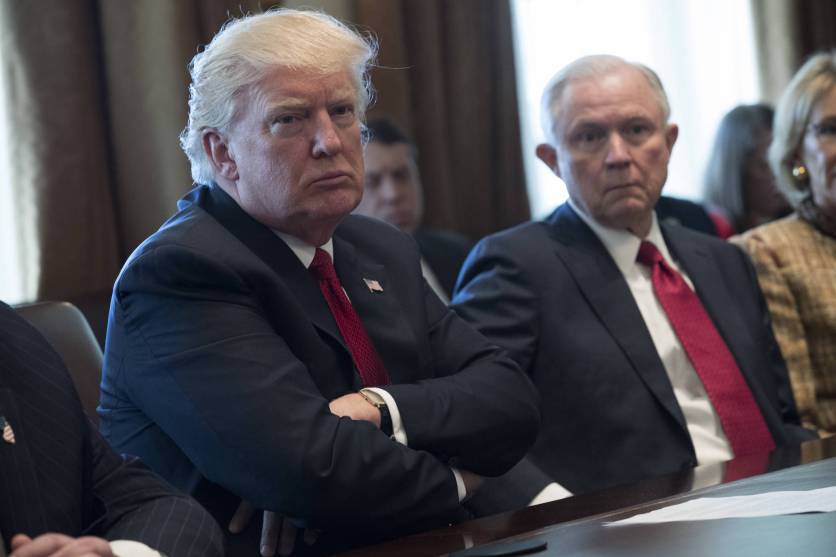 In a series of angry tweets Monday morning, President Donald Trump once again attacked Jeff Sessions, describing him as the “beleaguered” attorney general and asking why he and congressional investigators looking into Russia’s interference in the 2016 election have not been focusing on Hillary Clinton.

So why aren't the Committees and investigators, and of course our beleaguered A.G., looking into Crooked Hillarys crimes & Russia relations?

Trump has now publicly undermined Sessions on multiple occasions, after first telling the New York Times last week that he never would have appointed him as attorney general had he known that Sessions would recuse himself from the Russia probe. The attorney general was forced to recuse himself in March after it was revealed he had twice met with the Russian ambassador. He had previously failed to disclose the contact.

So many people are asking why isn't the A.G. or Special Council looking at the many Hillary Clinton or Comey crimes. 33,000 e-mails deleted?

Despite the public criticism, Sessions has said he intends to remain in the job.

The tweets on Monday came as Jared Kushner, Trump’s son-in-law and senior adviser, released his first public statement explaining his contacts with Russian officials during the presidential campaign. Kushner portrayed his activities as at worst careless and denied accusations of collusion.

On Monday, Trump also lashed out at Rep. Adam Schiff, the ranking member of the House intelligence committee, for leading what he characterized as an unfair investigation into his campaign associates. The president also appeared to be trying to indirectly deflect ongoing reports that he watches too much cable news by accusing Schiff of doing just that.

Sleazy Adam Schiff, the totally biased Congressman looking into "Russia," spends all of his time on television pushing the Dem loss excuse!