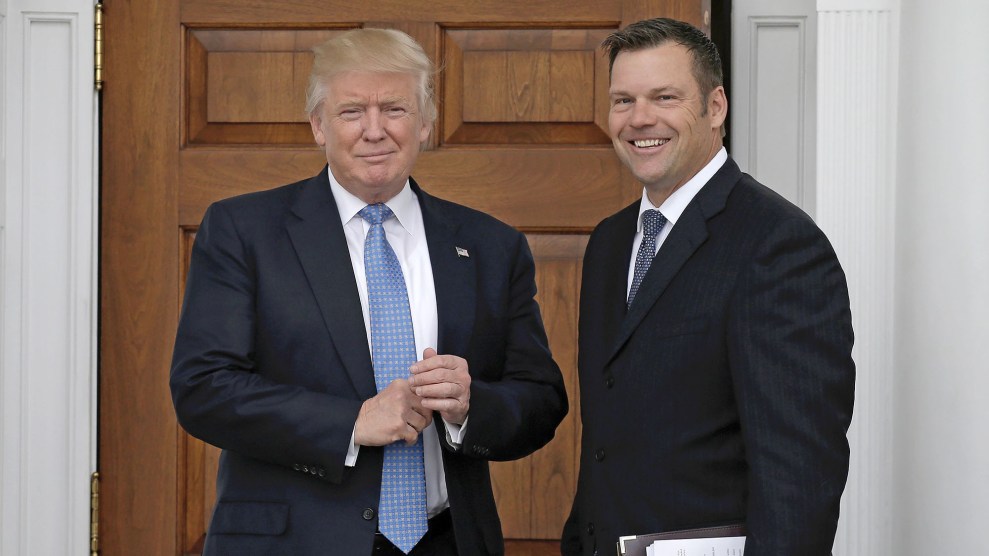 The Justice Department’s Civil Rights Division under President George W. Bush was mired in scandal over illegal politically motivated hiring practices and controversial enforcement of voting rights laws. The key figures behind these moves went their separate ways at the end of the Bush administration. But now some of them, along with other Bush Justice officials, are enjoying a reunion—on President Donald Trump’s commission on election integrity, which is holding its first public meeting on Wednesday.

Much of the chaos in the Civil Rights Division took place in its Voting Section. In 2002, Hans von Spakovsky, an outspoken proponent of voter ID requirements whom Trump appointed to his commission last month, became a top attorney there. He later described the atmosphere in the Voting Section to the New York Times as “a clash between folks like me who really believe that the Voting Rights Act needs to be applied in a race-neutral manner and the folks who had been there a long time who saw it, frankly, as a way of helping only minority voters, and in particular, helping one political party.”

In 2003, Alexander Acosta, whom Trump appointed this year as secretary of labor, became the head of the Civil Rights Division, and a Republican attorney named Bradley Schlozman was placed charge of hiring for the Voting Section. Schlozman, the Justice Department’s inspector general later found, favored candidates with conservative political beliefs, in violation of civil service laws. In a 2003 email, Schlozman explained his hiring philosophy: “My tentative plans are to gerrymander all of those crazy libs rights out of the section.” Von Spakovsky participated in the hiring process. Among their hires was J. Christian Adams, a Voting Section attorney who went on to win the first case in which the Voting Rights Act was used to fight discrimination against white voters.* Trump named Adams to the voting commission last week.

After leaving the Justice Department, these officials continued to work together. Adams became general counsel for a conservative nonprofit called the American Civil Rights Union (ACRU), where he threatened and filed lawsuits to force counties across the country to remove people from their voter rolls. He left in 2015 to run another conservative group, the Public Interest Legal Foundation, which does similar work. He and von Spakovsky, who joined the conservative Heritage Foundation after the Senate failed to confirm him to a Federal Election Commission post in 2008, sit on the boards of both groups. Another member of the ACRU’s board is Kenneth Blackwell, the former secretary of state of Ohio, whose eight-year tenure was marked by chaotic elections and attempts to restrict voter registration. In 2004, he ordered clerks to strictly enforce an antiquated law that required voter registration forms to be turned in on card stock of 80-pound thickness, the type of paper used for wedding invitations. Blackwell retracted the order after coming under intense criticism. He is now on Trump’s voting commission.

The commission’s vice chair, Kansas Secretary of State Kris Kobach, also served in the Bush Justice Department as Attorney General John Ashcroft’s chief adviser on immigration and border security. Kobach’s work on voting has brought him into contact with other members of the commission. One of Kobach’s goals is to allow states to require proof to citizenship in order to register to vote, as he has tried to do in Kansas. Many Americans lack passports and don’t have easy access to their birth certificates. Kobach is currently fighting civil rights groups in two separate cases over the issue. Adams is litigating one of those cases alongside Kobach and has called for the proof-of-citizenship requirement to prevent noncitizens from registering to vote—a problem he believes pervades the US election system. Schlozman, who has stayed out of the spotlight since he left the Justice Department, has filed briefs along with Adams in support of Kobach in these cases.

Also taking Kobach’s side in this fight is Christy McCormick, a Republican member of the Election Assistance Commission, an independent government agency, and also now a member of Trump’s voting commission. McCormick also worked in the Voting Section under Bush, where she was hired as a senior staff attorney in 2006 and remained there until her appointment to the Election Assistance Commission in 2014. She has recently drawn notice for her skepticism of the seriousness of Russian meddling in 2016 elections.

In convening the voting commission on Wednesday, Trump repeatedly raised the specter of voter fraud, saying that there were reports of irregularities involving “very large numbers of people in certain states,” despite no evidence of this. He instructed the commissioners, “You will approach this important task with a very open mind and with no conclusions already drawn.” But given all the work they’ve already done together, in the Justice Department and elsewhere, it appears that several of them already have a clear sense of what they’re trying to accomplish.

Correction: An earlier version of this article misstated J. Christian Adams’ role in the case alleging discrimination against white voters.